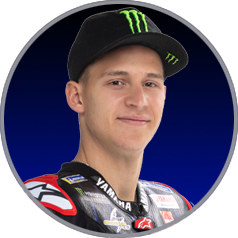 I enjoyed today's sessions a lot, because the last two race weekends were more about stress and not making any mistakes than about enjoyment. Now I'm enjoying riding so much again. Even in the time-attack it's been a while since I was able to get that feeling of being on the limit. I was really enjoying it. It's nice to battle for first in the timesheets with Pecco. Sunday is the most important, but it's nice to see the two most competitive riders of the second half of the season fighting. For today, we had planned to try the medium and the hard tyres, but because of the wind it was quite difficult to adapt myself properly, so we need to do it tomorrow instead. Other than that, we wanted to try a few things on the bike, but to be honest the most important thing was to be back after Misano and check my riding, and I think it was quite okay. The triple crown is not just in my hands, so instead my target this weekend is to fight for the race victory and then we will see what happens, also concerning the Team and Constructor's Title. We need to at least try to win to secure the triple crown.