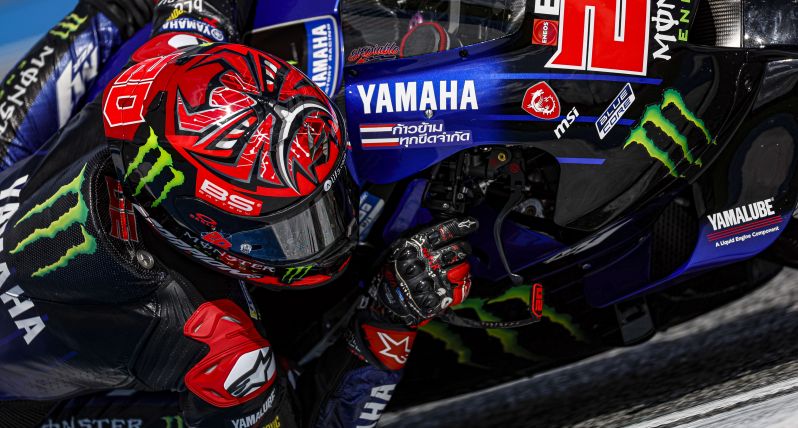 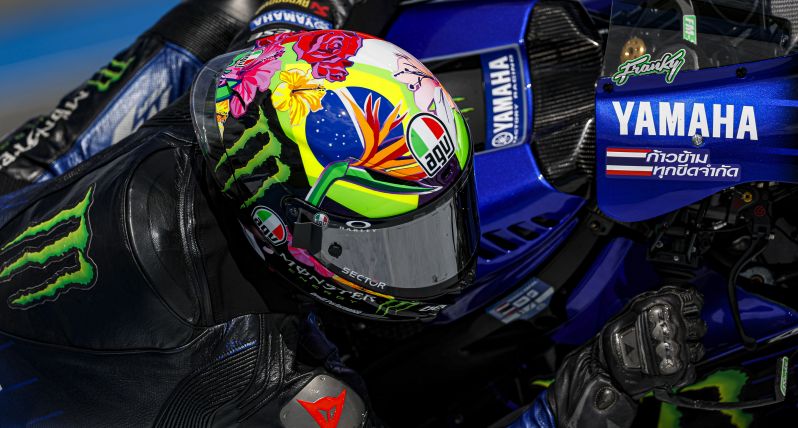 Monster Energy Yamaha MotoGP’s Fabio Quartararo held firm in today’s Thailand Grand Prix Q2 session. He was on the limit to secure P4 on the grid. Franco Morbidelli had a strong end to Q1 but missed out on a place in Q2. He will start the race from P14.
Buriram (Thailand), 1st October 2022

Monster Energy Yamaha MotoGP’s Fabio Quartararo went all out in the Thailand Grand Prix Q2 session to reach his goal. He wanted to secure a place on the first two rows and did so, taking fourth place. Franco Morbidelli showed good race pace and some hot laps on Day 2 at the Chang International Circuit. However, he found himself in Q1 and was unable to promote to Q2. He will start tomorrow’s race from 14th on the grid.

Quartararo immediately made his intentions clear in the sunny conditions of Q2, setting a 1’30.166s benchmark lap. It briefly put him in pole position before he settled into fourth place. The Thai fan favourite managed to shave off a bit of extra time on his fourth try. This 1’30.009s put him in provisional third place, 0.116s of the fastest time, as he returned to the garage for a fresh set of tyres.

The Frenchman was looking for a nice slot on track on his second run, without any rivals holding him up or following him around. Once he found some clear space, it was crunch time. His final bid for pole, a 1’29.909s, set on lap 8, earned him fourth place in the qualifying results, 0.238s from the top.

Morbidelli narrowly missed out on a place in Q2 and had to take part in the Q1 shoot-out. The Italian soon found himself on a busy part of the track. His 1’30.770s best time, set on lap 4/5 of his first run, put him in fifth place as he returned to the box.

The number-21 rider started his second outing with five minutes left on the clock. He needed to find 0.228s at the time to secure a place in the top 2, but the pace was quickening. The Yamaha man was pushed down to eighth but dug deep in the final minutes. He responded with a 1’30.528s on lap 8 of nine in total. It put him in fourth. He had one more go and started the lap with a red and orange sector. However, he lost his advantage in Sector 3. Morbido stayed in fourth place, putting him in 14th place on the grid.

Today’s qualifying was pretty tough. The goal for Fabio was to be on the first two rows. We have seen in the previous round how crucial that is. He did an amazing job to drop a 1’29.9s lap at the end of Q2 and take fourth place on the grid. This should give him a good opportunity to fight at the front tomorrow, especially if it’s dry again, because his race pace is good. Franky’s race pace is also strong, as seen in FP4. His P14 starting position isn’t showing his true potential. It will be important for him to make up some positions at the start of the race so he can enter the top 10 early on, because he has the pace to stay with them. The real question is what the weather will be like. In case of a dry race, both our riders are comfortable and ready with their tyre decision. In case of a wet race, it will be very interesting to see how everyone adapts.

Today was a tough but great qualifying day. I feel that we have great potential, especially concerning our race pace. I went out with old tyres, and I was feeling quite fast. In the time attack, I was just giving my 100%. We know there are areas where we are losing time, and we have less grip compared to 2019. But I'm strong in Turn 9 and 10. Especially in Turn 10 I can carry speed. That's the place where I can try something. I think we can do a great race tomorrow!

It was a tricky day because we missed Q2 by just a small margin. Then we needed to go through Q1, and in the time attack I again couldn't extract the real potential from the bike. That's my problem: I can't extract the full performance from the tyres as I would like to. I struggle with the lack of grip, even more so during a time attack compared to a normal run. After many laps on the same tyre, I'm able to get some performance out, but during the time attack we have only three laps at our disposal, and I just can't feel the right performance from the tyre soon enough. We will see what the race will be like tomorrow because the weather is a question mark. If it's dry during tomorrow's Warm Up, it will be another chance to understand our lack of tyre usage better.