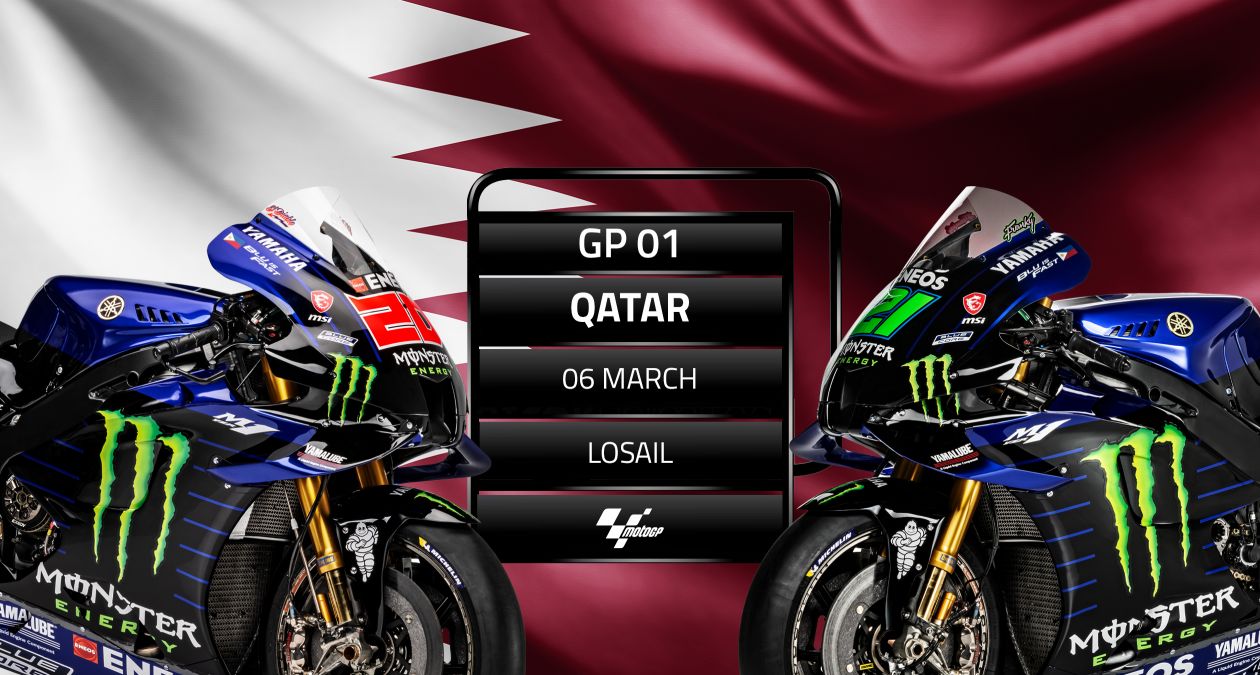 Monster Energy Yamaha MotoGP's Fabio Quartararo and Franco Morbidelli have travelled to the Losail International Circuit to kick off the 2022 MotoGP season this weekend, starting with the Grand Prix of Qatar.
Doha (Qatar), 2 March 2022
The Monster Energy Yamaha MotoGP Team are eagerly awaiting the start of the 2022 MotoGP season. Fabio Quartararo and Franco Morbidelli will be riding their YZR-M1s under the floodlights of the Losail International Circuit this coming weekend during the Grand Prix of Qatar, gunning for their first podium of the season.

Quartararo was the 2021 Doha GP winner and is eager to push to the limit again this year. Having shown good pace on used tyres during the winter testing, he is determined to make his, the team’s, and Yamaha’s hard work during the winter break pay off.

Having made a close to 100% recovery from his knee injury, Morbidelli is all the more keen for some action at the Losail track this year. The Italian previously secured a win in the Moto2 class in Qatar in 2017. Though the Doha track hasn’t been podium-rich for him in the premier class, he is hoping to change that this weekend.

Built on the outskirts of Doha, the Losail International Circuit was added to the MotoGP calendar in 2004 and became the first and only circuit in MotoGP to host a night-time Grand Prix four years later. The track's flowing midsection suits the Yamaha, thanks to its mix of medium and high-speed corners (six left and ten right turns). However, the track is best known for its iconic over a kilometre long main straight followed by a steep first corner – a combination that offers plenty of overtakes, as shown in our latest 'MotoGP eSport shoulder cam' video.

We are all excited to ‘go back to school’. We’ve completed our winter testing schedule on a positive note, and we feel ready to start the new season. The race in Qatar is usually a successful round for us. Our aim is to start the season strong to set the right tone. It will be interesting to see where we stand at the end of this weekend. For sure, we will give it our all to give the fans a spectacular season opener.

I’m happy we’re starting the 2022 season now. I spent the off-season usefully, but I still prefer to be midseason and have my eyes on the goals that we need to achieve. We have good memories of this place from last time. I won my first GP with the factory team in Losail last year. The goal for this week is to hit the ground running. We need to make a good start on the Friday and try to make another step compared to last year.

We are in Qatar now and ready to start the new season. This GP weekend will be important for me to see where we stand in terms of fitness level during a race weekend. But judging by the tests, I’m in pretty good shape. We made good steps during the tests, especially in Indonesia, so I’m looking forward to getting to work here.
MotoGP eSport Video