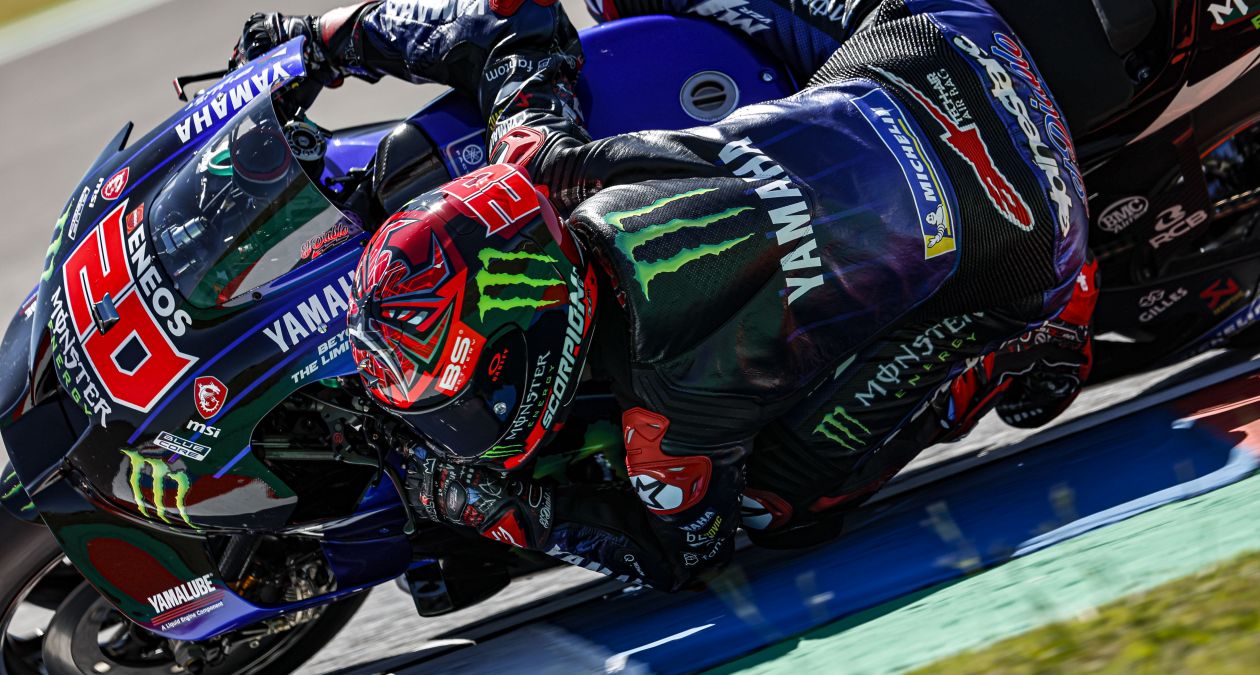 A delay in the MotoGP teams’ cargo shipment resulted in a cancellation of the Friday sessions and the Saturday schedule being revised. The MotoGP riders would have two free practice sessions of one hour each. The combined top 10 would qualify for Q2, the other riders would have to take part in Q1.

Quartararo was quick to find a good pace in the extended FP1 and FP2, using the track time to try various settings and tyres. Whilst getting his race set-up sorted for tomorrow, he easily secured a place in Q2, taking fourth place.

The current World Champion let his main competitors head out ahead of him before he joined the Q2 shoot-out. His first hot lap, a 1’38.487s, put him in third place. He then quickly returned to the pits for for a fresh set of tyres.

With five and a half minutes left, he resumed his pole position endeavours. He was on a good lap when he was held up by a cruising fellow rider. Nevertheless, El Diablo picked it back up where he left off on his very next attempt, setting a 1’38.281s on lap 6/7. It put him in sixth place, 0.593s from pole.

Morbidelli had a challenging first day at the Termas de Río Hondo track. Unable to secure a place inside the top 10 of the combined free practice results, he had to take part in Q1.

Morbido was the first rider to start the 15-minute qualifying heat. He set a benchmark lap of 1’40.763s but knew he had more to give. The number-21 rider improved on his next two tries, setting his best lap thus far, a 1’39.307s for fourth place, before heading into the pits with more than six and a half minutes on the clock.

Once back on track, the Italian put his head down as the pace quickened. He bettered his time to a 1’38.895s, set on lap 7/8, but didn’t improve his placement. He ended the session in fifth place, 0.304s from first, which put him in 15th place on the grid.

It’s been a completely unusual weekend. We have been quite lucky compared to others because we received about 80% of our equipment and were able to finish the bikes almost completely before the missing crates were delivered. There were doubts that this race would start, because of the delays. We weren’t sure if the missing crates would arrive here on time, but luckily Dorna was able to make it happen.

We came to the circuit quite early this morning to put everything in place, so we were 100% ready for today’s sessions. This weekend we have an unusual schedule because all the sessions are compressed into one day. It’s intense, but in my opinion it’s a good format that could be considered to be applied again in the future.

We were surprised this morning by the condition of the tarmac. We kept a close eye on Moto3, and we saw that they were already fast whilst there was no rubber on the track. That was a very welcome surprise for us, because to us grip means performance.

Today we only did two free practice sessions that we used to collect data, decide on the tyres, work on the set-up, and then at the end we had to go into time-attack mode to try to secure a place in Q2. After that, we went directly into qualifying.

Fabio was disturbed by a cruising rider. It’s a pity and it cost him maybe even a place on the first row. In any case, he has a good rhythm. He is already at a good point and ready to finalise the tyre choice for the race. This will be decided tomorrow during Warm Up, which will be an even more important session than normal.

Franco is not satisfied with his bike’s set-up. The team will put in their very best effort and experience to help him figure out a solution that will be ready in time for Warm Up. It will definitely be important for him to have another great start like he had in Indonesia to recover some positions early on in the race.

At this track, if you don't make the lap on your first try, you're already losing out because Turn 6 is a corner where you are spinning. Jack Miller was not really on the race line, but when someone is approaching in fourth or fifth gear and you have someone beside the racing line, it's disturbing, and to me it's not fair. And that's it. I did my best. We know where we lost out, but luckily I think I have never braked later in Turn 5 in my life. And second row is maybe not the best result I could have gotten today, but I'm still in a good position for the race. Our pace is not the best, but not bad either, so I think we can fight for a great result.

In FP2 we were decent, looking at the race pace, but I was not able to go directly into Q2. That was a pity because it was really close. Then when we put on the new tyres, I wasn't able to have the same pace. We will try to improve for tomorrow. There are some things we can improve. This Saturday we tried to get better in some areas, but instead we got a bit worse. It's okay though, we will try to improve for tomorrow.