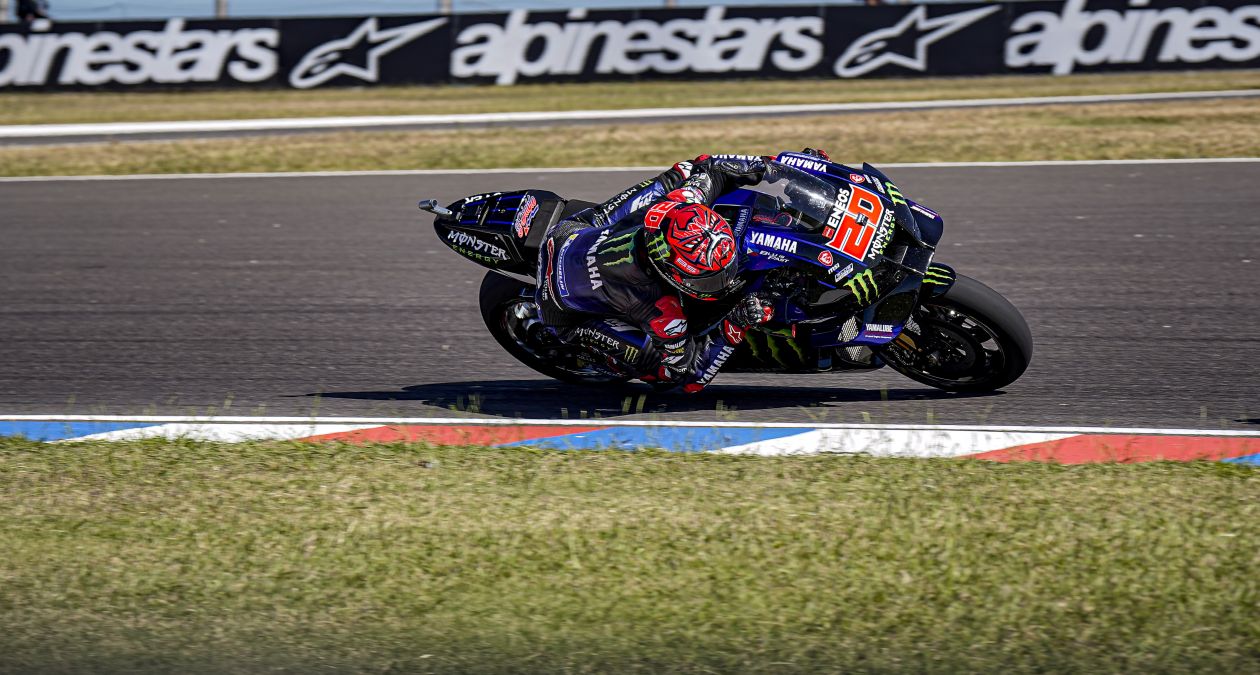 The Monster Energy Yamaha MotoGP team’s expectations at the Gran Premio Michelin de la República Argentina weren’t met today. Fabio Quartararo unexpectedly had a problem with rear grip and finished the race in eighth place. Franco Morbidelli was unlucky to get a puncture which prematurely ended his challenge.
Termas de Río Hondo (Argentina), 3rd April 2022
Monster Energy Yamaha MotoGP’s Fabio Quartararo had to deal with rear grip problems early on in today's Gran Premio Michelin de la República Argentina but bravely fought his way back up to eighth place across the finish line. Franco Morbidelli had his race cut short due to a tyre puncture.

Quartararo started from P6 and emerged through the opening lap in seventh place and later settled into ninth. Having to contend with unexpected rear grip problems, El Diablo fell back to 13th place, but four laps later he got into a steady rhythm and found his way back to 11th.

The next challenge was to close the gap to the riders fighting for sixth place, and he went about his business. With Pol Espargaró crashing out on lap 15 and Enea Bastianini running wide on lap 16, the Frenchman moved back up to ninth. He thought about overtaking Luca Marini on lap 17 but bided his time for one more lap before he made his move and made it stick. He then focused on bringing home the eight championship points and crossed the finish line in eighth place, 10.215s from first.

Morbidelli didn’t have the start he had hoped for from P15 and completed the first lap in 18th place. He lost two more positions but put Darryn Binder under pressure to reclaim 19th. However, with 18 laps to go, a puncture forced him to end his race early.

Today’s results put Quartararo and Franco Morbidelli in fifth and twelfth place in the championship standings, with 35 and 14 points respectively. After Round 3, Yamaha and the Monster Energy Yamaha MotoGP team are in fifth place with 35 points in the Constructor championship and in fourth position with a 49 points total in the Team championship.

Monster Energy Yamaha MotoGP will be back in action at the Circuit of The Americas in Austin, Texas from April 8-10 for the Grand Prix of The Americas.

It was a difficult race. It was definitely not what we expected and in some way we also had bad luck with Franco getting a tyre puncture, ending his race early. With Fabio we suffered from the fact that the track conditions were less grippy than before. This was especially noticeable at the beginning of the race, which cost Fabio a lot of positions. After that it was very difficult for him to manage the race. Overtaking in this kind of situation is complicated, but Fabio still salvaged some important points. Now we go to COTA, which is a completely different track that suits our bike better.

The big issue was rear grip and top speed. We already knew about the top speed, but the lack of rear grip was surprising. The first few laps were a nightmare - I was losing positions. As soon as there was more rubber on the track, it was better. But overtaking was really difficult. I did my best, but I used my rear tyre more than expected, and I finished in eighth position. It's frustrating because I didn't make any big mistakes. I was just losing out because of the lack of grip. Let's see if we can find more grip in Austin.

I had a tyre puncture and needed to stop. That's unfortunate... We were not in a great position, but we were catching up. I felt that this morning I made a good step with the bike, so I would have been able to catch up, but then I had a puncture and had to stop.