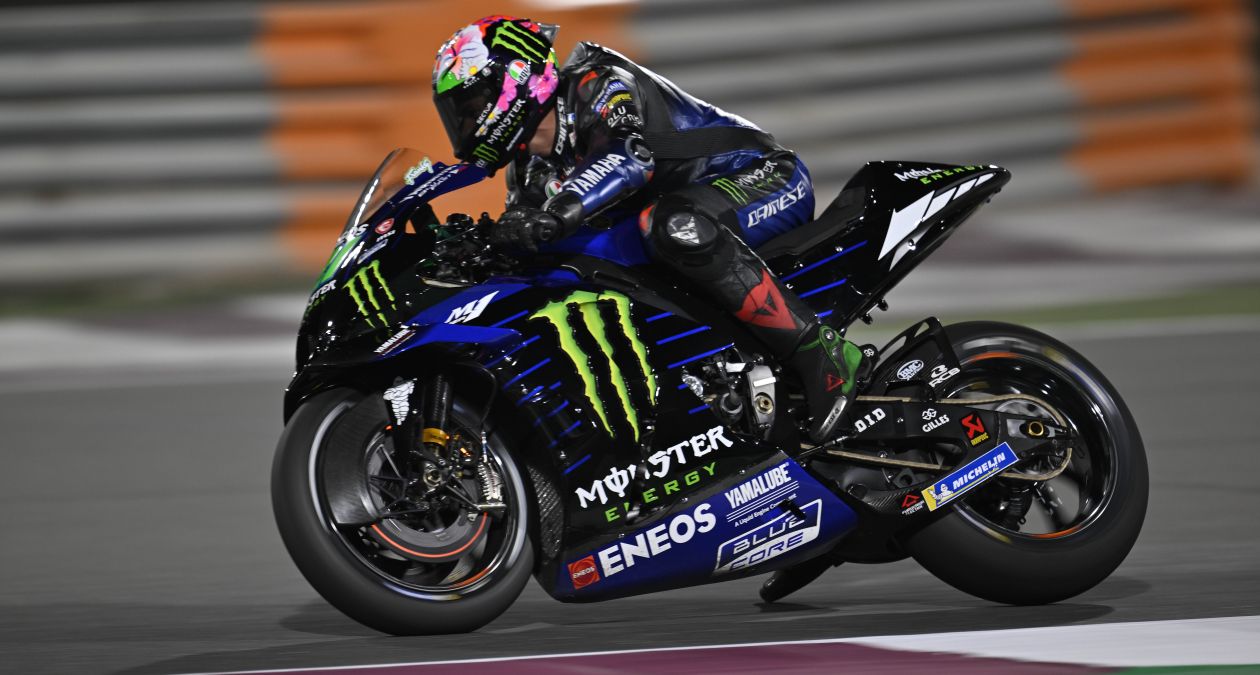 Morbidelli put any concerns about his healing progress to bed in the hot and humid FP1. He was soon up in third place with a 1’55.551, on his seventh lap. The Italian showed no signs of slowing down, completing two runs of nine laps each. He improved his best time to a 1’55.294s, set on lap 17/18, to finish the first session of the 2022 season in sixth place, 0.443s from first.

Quartararo had his head in the game from the off. He immediately started preparing for Sunday’s race, eager to repeat the 2021 Doha GP result. The Frenchman worked systematically on his bike’s set-up and gradually improved his race pace over the first 45 minutes of riding action at Losail. He produced a 1’55.600s on lap 17/18, that put him in 11th place, 0.749s from the top.

The number-20 rider made a big step in the evening session. With the sun setting, the conditions got trickier, catching out multiple riders. Meanwhile the defending World Champion shaved off more than 1.3s of his FP1 time by his twelfth lap. With eight minutes on the clock, he started his final push of the first free practice Friday of 2022. He ended in eighth place in the FP2 and combined FP standings, 0.474s from first, with a 1’53.906s best lap set on 16/17.

Today we’ve officially kicked off the 2022 season. It’s been a long time since we’ve last ridden here. In previous years, we had a test in Qatar before the race but this time we didn’t, so we are working with last year’s data. FP1 gave us the feeling that the track was already fast, but we approached it like we always approach the first session of the season: no time attacks, just collecting data without pushing too much. After that, we went into FP2 with the aim to do the time attack to secure a provisional place in Q2 because we expect the conditions of FP3 to be hotter, reducing the performance. We reached our target. Even though there’s a gap to the top that we need to bridge in time for Q2, we feel positive that we have enough time to get the job done. Tonight we will compare both riders’ data, and tomorrow we will evaluate the modifications that we’ll prepare for FP3.

It was a good day for us. We’ve been fast in FP1 and in FP2 as well. We also had a chance to try the medium tyre. I was expecting a little bit more from it. I'm not entirely happy about that run, but everything came back on the soft tyre, and I was able to make a decent lap or five. The competition is fast, so we've got to dig to find something. But at the same time, I'm really happy because we're getting back to working for important things and the top spots and being with the top guys, and that's a very nice feeling.

Today was a tough day. I didn't feel so good on the bike to be honest. We need to find a way to improve. I was fast in the first two sectors, but something was missing today, and we need to understand why and solve it for tomorrow. I felt like I was riding on the limit, but we're not on our real limit. But it's just the first day in Qatar - normally we have a test here. We'll check last year's data to see what's different and where we can improve. We are not extremely safe for the Q2, so we will see if we will do a time attack in FP3 or not.