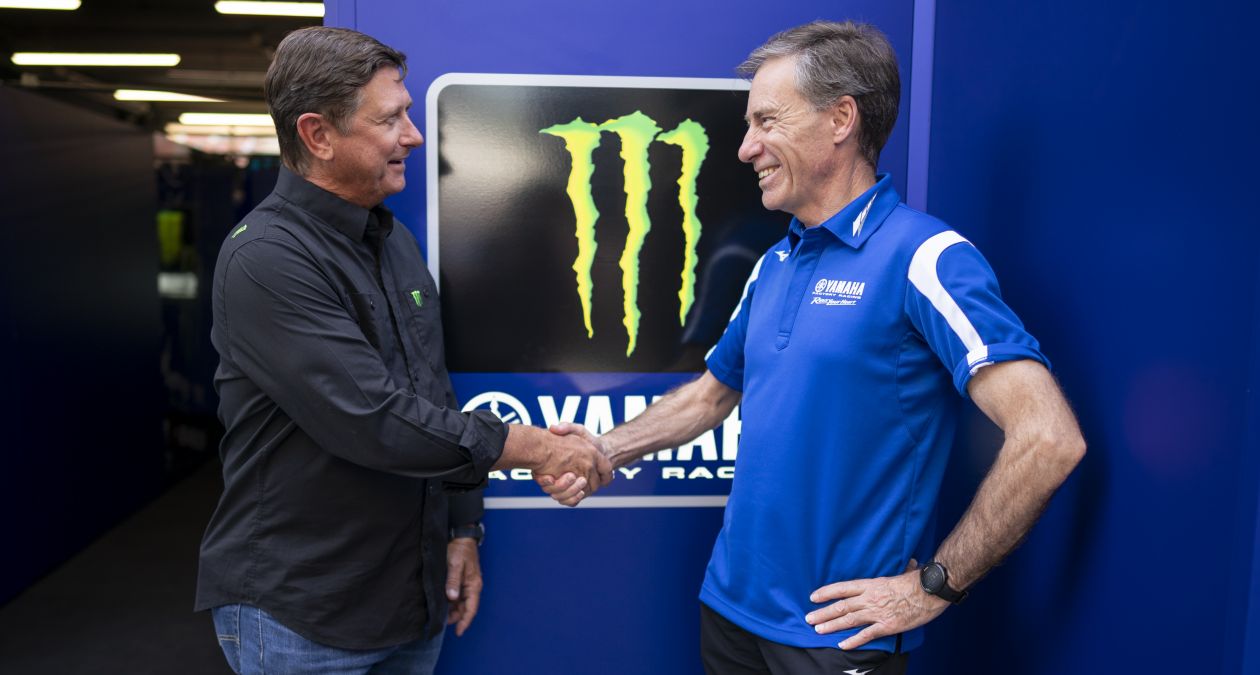 The multi-year agreement sees Monster Energy extend their Title Sponsor contract and further strengthen their long-standing partnership with Yamaha’s Factory MotoGP Team. Monster Energy have been an Official Sponsor to the team since 2013 and became Title Sponsor in 2019. During this time, the factory Yamaha squad secured the MotoGP Triple Crown in 2015, the Team Title in 2016, and won the 2021 MotoGP World Championship Title.

Both Fabio Quartararo and Franco Morbidelli are established Monster Energy athletes. Reigning World Champion Quartararo, who is confirmed to stay with the team for two more years, is in championship contention again. He’s currently leading the standings by 8 points. Meanwhile, ahead of tomorrow’s Gran Premi Monster Energy de Catalunya, the team is in third position in the team rankings, 10 points from first.

The Title Sponsorship renewal means the iconic Monster Energy 'claw' will continue to feature prominently in the coming years on the factory YZR-M1, all the Yamaha Factory Racing MotoGP Team’s assets, and the riders’ leathers.

The Monster Energy-Yamaha global alliance also extends to other racing disciplines such as Monster Energy Supercross, AMA Motocross, and FIM Motocross World Championships, underlining that Monster Energy and Yamaha are key-players and partners in the motorcycle racing world.

“The Gran Premi Monster Energy de Catalunya is the perfect occasion to announce the continuation of our team’s strong partnership with Monster Energy Company. They will be the Title Sponsor of our Factory MotoGP Team for several MotoGP seasons to come.

“Yamaha and Monster Energy have been close partners in various motorsport disciplines for numerous years. Monster Energy have a great understanding of the motorsports industry and MotoGP – the pinnacle activity of the motorcycle racing world – which allows us both to work together very smoothly. They became our team’s Official Sponsor in 2013 and Title Sponsor in 2019.

“This Title Sponsorship renewal is a testament to the great trust and respect we’ve built over the years as well as the shared drive of both organisations to continue supporting motorcycle sports and promoting our brand values in the top series of global racing.

“The new Agreement signifies the intention of both Yamaha and Monster Energy to further strengthen our partnership in the years to come.”

“Monster Energy and Yamaha have had a long history of racing together at the very pinnacle of motorcycle racing and during that time we have forged a successful partnership both on and off the racetrack.

“Watching Fabio win the MotoGP World Championship last year on board his Monster Energy Yamaha YZR-M1 was one of many highlights we have enjoyed in our time together, and we look forward to several more years of racing together with Yamaha in MotoGP.

“We are delighted to be able to announce this extension at our title sponsorship round in Barcelona and wish both Franco, Fabio, and the entire team success for the weekend and for the remainder of the season.”