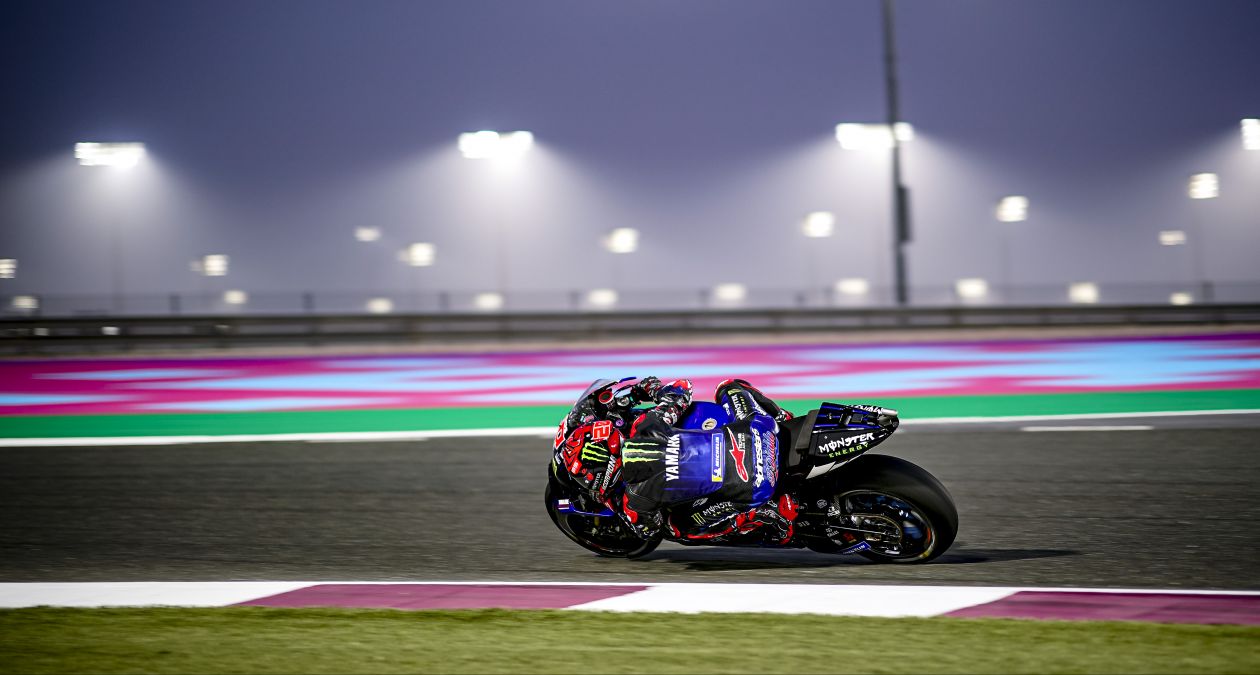 Monster Energy Yamaha MotoGP’s Fabio Quartararo went through Q1 to join teammate Franco Morbidelli in today’s Q2 sessions. They will start tomorrow’s Grand Prix of Qatar from 11th and 12th position respectively.
Losail (Qatar), 5th March 2022
The Monster Energy Yamaha MotoGP Team continued their search for the perfect setting to suit the Losail International Circuit on Day 2 of the Qatar GP weekend. Fabio Quartararo showed a strong pace in Q1 and grabbed second place. In Q2 he struggled to find the same feeling and ended the session in 11th position. Franco Morbidelli was promoted directly into Q2 but wasn’t able to set the lap he had in mind. He will start the race from 12th place on the grid.

Quartararo missed out on a top-10 place in FP3 and had to take part in Q1. But this only spurred the defending Champion on to dig deeper. He and his crew found an improvement in FP4 that benefitted him in Q1. After his first flying lap, a 1’53.654, he was in P1 with a 0.126s advantage. He wasn’t able to improve on this lap, but it was fast enough to keep him in second place, 0.142s from first, seeing him through to Q2.

As the Frenchman had to use a medium rear tyre for his first run in Q2, he set only one hot lap with it before heading back to the garage. With four and a half minutes remaining, he headed back out with a fresh soft rear that allowed him to push more. A 1’53.635s, set on lap 5/6, briefly put the number-20 rider in eighth place before he dropped back to tenth. Unable to find further improvements, he ended the session in 11th place, 0.624s from first.

Morbidelli let most of the other riders head out ahead of him before joining the 15-minute Q2 shoot-out. He set a 1’54.283s on his third lap that put him in 10th place. He stayed out for one more try, but he didn’t find a time improvement and headed into the pits for a quick switch of tyre with six minutes left on the clock.

Two minutes later, the Italian was back on his way. He clocked a fastest time of 1’53.982s on his sixth and penultimate lap, but it wasn’t enough to move further up the order. He ended the session in 12th place, 0.971s from pole.

For sure, these were not the qualifying results we were hoping for. We knew it was going to be tricky, but we still expected better results. The pace that both riders showed is definitely better than what their qualifying results suggest. It will be fundamental to have a solid start to the race. The opening lap will be a key point. Based on the race pace we’ve seen today, there’s a possibility that we can do a good race. We will use tomorrow’s Warm Up to decide on the tyres.

The only thing I concern myself with is that I push myself 100% whenever I go out on track. I gave it my all today, and I will do the same tomorrow, at the next round, during this whole season, no matter what the circumstances are. That's the only way for me to be at the front. So, that's the only thing on my mind. We just need to make a perfect lap at the start of the race. Last year during the Doha GP, I also came from behind for most of the race, and I was able to overtake. Tomorrow we will try something on the bike, but our pace in general is not so bad. I'm fast, so we will see. I will do my best, but I also need to take care of the tyres, that's also important here.

It was a tricky day. Unfortunately, we saw that the other guys have a really good potential in qualifying. We tried to do our maximum, and we were close to our maximum, but there are still some areas that we can work on to give our 110%, let's say. We will try to improve for tomorrow. The rhythm is not so bad. The starting position is not great, but let's see. There's still a warm-up session and a race to do.