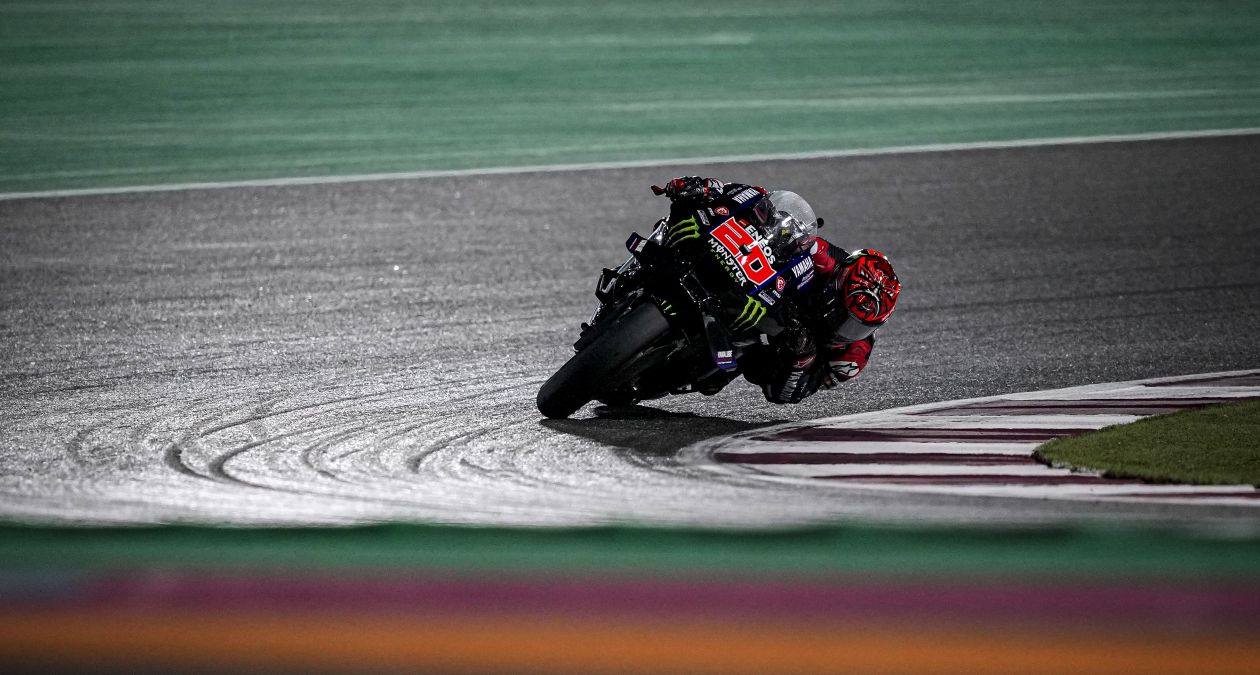 For Monster Energy Yamaha MotoGP’s Fabio Quartararo a strong start was key in today’s Grand Prix of Qatar. He made up a lot of ground in the opening laps and ultimately finished in 9th place. Franco Morbidelli struggled to breach through the busy mid-pack but kept pushing and crossed the finish line in 11th position.
Losail (Qatar), 6th March 2022
Monster Energy Yamaha MotoGP’s Fabio Quartararo and Franco Morbidelli stood their ground in the 2022 MotoGP season opener. Though neither was able to storm to the front like they had planned, they kept their heads down and collected solid points finishing in 9th and 11th place respectively.

It was a beautiful night at the Losail International Circuit – the perfect setting for the first race of the 2022 season. The anticipation was palpable on the grid as the 24 riders were preparing themselves to dive into Turn 1.

Quartararo stuck to his plan perfectly: he had a belter of a start from 11th on the grid that temporarily moved him up to seventh, before closing the first lap in eighth place. He struggled to defend his position, falling back to 10th, but when Francesco Bagnaia crashed out together with Jorge Martin on lap 12, the Frenchman moved up to eighth place again. The number-20 rider spent the remaining 11 laps managing the tyres but ultimately took the chequered flag in 9th place, 10.543s from first.

Morbidelli had a difficult start from the midst of the field. He found himself in 16th position at the beginning of the second lap and later lost another position. It was mostly a lonely ride for the Italian. With clear space on track before and behind him, he focused on his race pace. Due to various crashers, the Yamaha man was up to 11th by lap 12 and pushed all the way to the finish line to keep his position, finishing 16.712s from the top.

Today’s results put Quartararo and Morbidelli in 9th and 11th place in the championship standings, with 7 and 5 points respectively. After Round 1, Yamaha and the Monster Energy Yamaha MotoGP team are in 6th place with 7 points in the Constructor championship and also in 6th position with a 12 points total in the Team championship.

The MotoGP paddock will be back in action in two weeks’ time for Round 2, the Grand Prix of Indonesia, at the Mandalika Circuit, where earlier this year a three-day winter test was held.

We already knew that this race would be difficult after yesterday’s qualifying, but we are still disappointed with today’s result. Coming to this track, we had higher expectations than what materialised this weekend. Both riders experienced unusually high tyre pressure almost immediately from the beginning of the race. This prohibited them from being on the attack like they normally would. We will be investigating why this happened. Fabio had a great start and that played to his benefit. He did the best he could do considering the circumstances. Franco struggled a bit at the start but then got into a steadier rhythm. We have to make steps for the next round and make sure we are closer to the front, where we belong.

I had a good start, but from the start the tyre pressure was super high. That was a bit strange but I pushed to the maximum, and I expected to have a bit better pace. We couldn't do better than this today. Of course, we had hoped for more today, but my job is to be 100% prepared and focused for every race. I always give my 100% in every position: whether I’m fighting for the victory or P3, P5, P15. I do my best, regardless of what position I’m in.

It was a difficult race. We struggled this weekend in terms of rear grip. That prevented us from having a wonderful performance. Speaking about my race: I had a really poor start. I wasn't cunning enough to make the right moves in the first laps, and I lost a lot of time. And then when I picked up my pace, I was not so bad. I was close to my maximum, that felt good. The problem is that our maximum was not enough to be on top this weekend. But it's just the first round. We know Qatar is a particular track and a particular weekend, so we move forward. We keep in mind the problems that we have, and we'll work on them for sure. But we go to Mandalika with the same energy as always, we will try to do a good job there, and then we’ll see where we stand there.