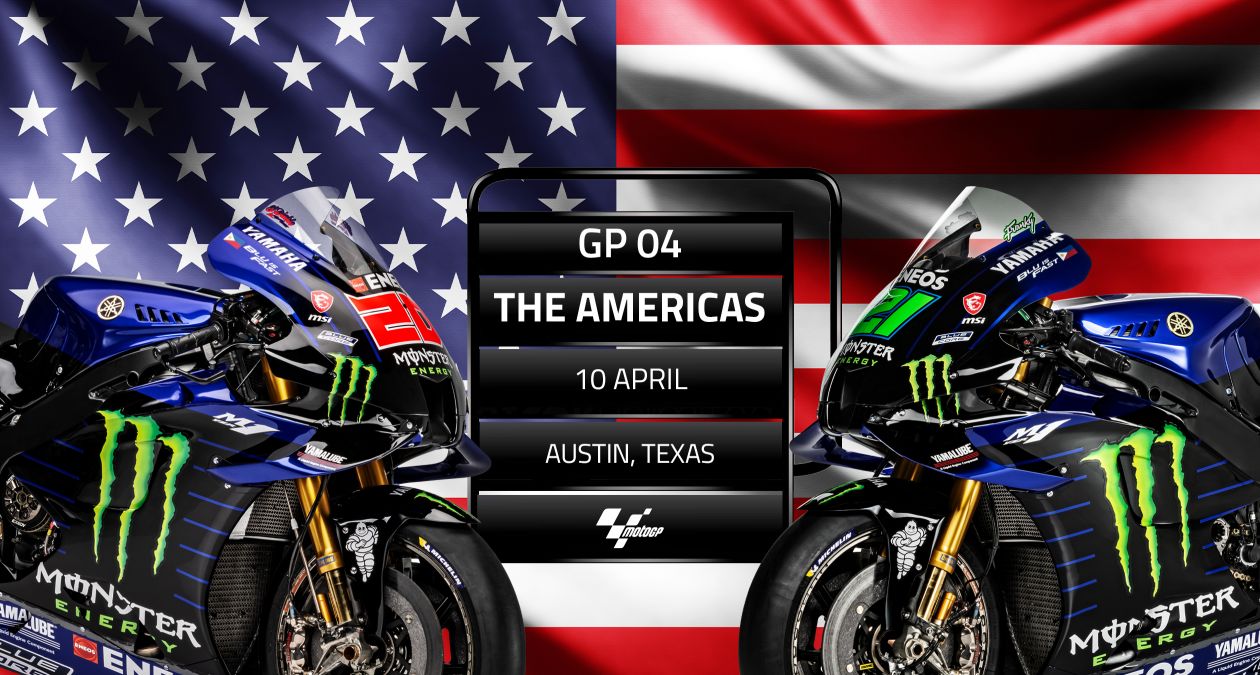 The Monster Energy Yamaha MotoGP team have arrived in America ready for Round 4 on the 2022 MotoGP calendar. This will be the 500th GP of the new era of the FIM MotoGP World Championship, which began in 1992 with the FIM, IRTA, MSMA & Dorna racing together.
Austin, Texas (USA), 6th April 2022
The Monster Energy Yamaha MotoGP Team have made their way to Austin, Texas for this weekend’s Grand Prix of The Americas. After a disappointing end to the Argentina GP last Sunday, both Fabio Quartararo and Franco Morbidelli are hungry to fight for top results at the COTA track.

Quartararo arrives at the Circuit of the Americas (COTA) holding fifth place in the championship with a 10-point gap to first. The championship is still wide open, and with good memories of the COTA track, El Diablo is ready to for the challenge.

In 2015, his very first year of visiting COTA, the Frenchman immediately scored a second place in the Moto3 class. Last year he equalled this feat on a MotoGP bike in only his second premier class race in Austin, which was crucial for his championship title win later on.

Morbidelli was unlucky to suffer a tyre puncture last week, cutting his Argentina GP short. He is looking forward to making a strong comeback at another track and move up from 12th place in the overall standings.

The Italian is a fan of the tricky Austin venue and is anticipating a positive race weekend. Last year he was still contending with a leg injury that prevented him from showing his true potential. This weekend he would like to add another top result to his resume. His best performances at COTA include his win in 2017 in the Moto2 class and the fifth place he scored with Yamaha in the premier class in 2019.

Constructed in 2013, The Circuit of the Americas (COTA) is one of the newest on the calendar, having been added to the Grand Prix schedule that same year. Its length of 5513m and mixture of fast straights and tight hairpins make the track both challenging and exciting to master for teams and riders. They need to find exactly the right balance for their bike’s set-up to suit the 11 left, 9 right turns, and the 1,200m straight in order snatch a place on the podium. The especially sharp Turn 1 will be a place where the fans can expect a lot of overtaking action, both at the start and during the race.

Those who wish to get to know the COTA track better can watch our latest MotoGP eSport video.

After a difficult weekend in Argentina, it’s important that we start this GP off on the right foot. We always really enjoy coming to Austin. It’s a quite technical track. On paper this shouldn’t be one of our strongest circuits on the MotoGP calendar, but we feel that this could be a good round for us. In recent years we’ve often scored good results here, as Fabio’s second place from last year showed. The race conditions then are similar to what we’re expecting this weekend, so we are optimistic. But COTA has been partly resurfaced, so only on Friday will we truly know what the track conditions will be like.

Austin played a key part in my championship win last year. That second place was like a victory because it gave me my first match point to secure the championship. This time we arrive here in a totally different situation and with a different mindset. Last year I always tried to win, but I was also trying to keep the lead in the championship. We can afford to be more on the attack now. We will do our best as always. Last year the rear grip here was pretty decent, but the bumps were tough. The track has been resurfaced since then. I’m curious to see what we can do this time round.

We now arrived at COTA which is a track that I really like, so it’s a good place to race at after a disappointing end to the Argentina GP. This track is difficult, but it's one of my favourites. Last year I wasn’t able to push because my leg was not 100% healed yet, and the bumps aggravated the situation. This year it should be a completely different story. I’m fully fit and the track has been smoothed out, so I’m looking forward to riding in Austin again.
eSport Video | Americas GP