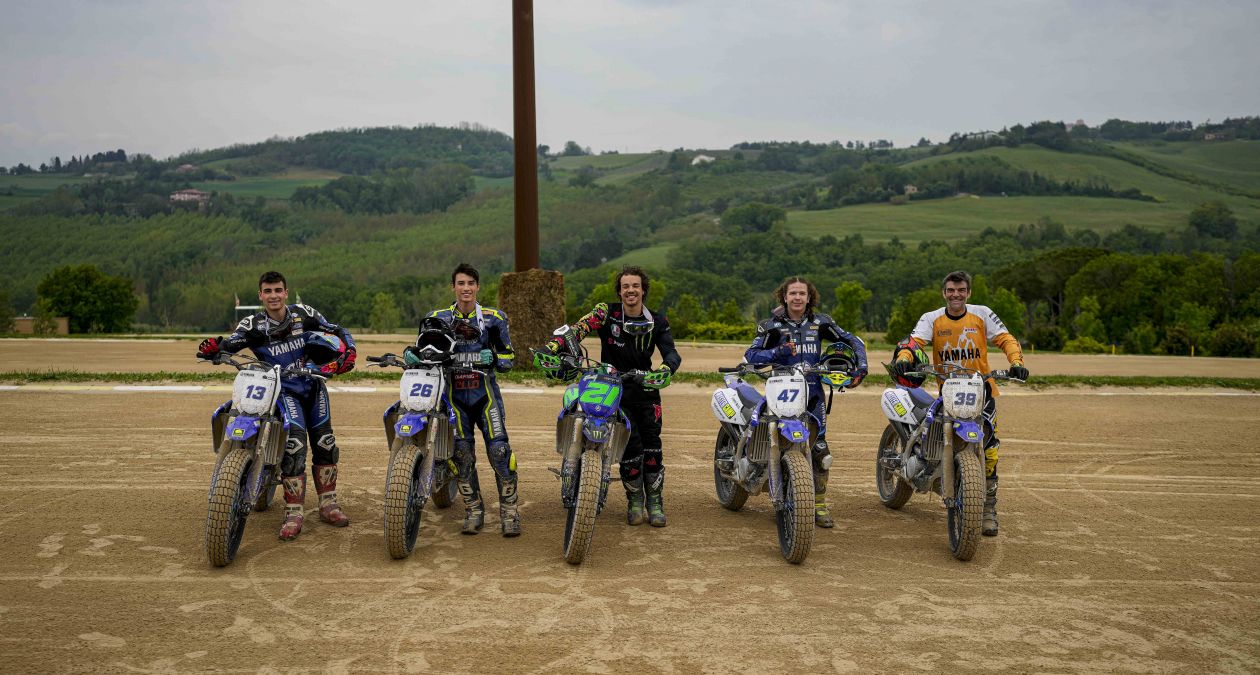 The 10th-edition Yamaha VR46 Master Camp students impressed their coaches Marco Bezzecchi, Trastevere73, and Franco Morbidelli with their pace on the MiniGP bikes at the Jeepers Kart track aboard YZ85s, in the MotoGP eSports game, and during the flat track session on YZ250Fs.
Tavullia (Italy), 6th May 2022
The second day of the tenth Yamaha VR46 Master Camp gave Jurand Kusmierczyk (aged 17, from Poland), Devis Bergamini (aged 19, from Italy), Enzo Valentim Garcia (aged 17, from Brazil), and Kevin Fontainha (aged 15, also from Brazil) the opportunity to showcase their talents in two racing disciplines: MiniGP and Flat Track.

In the morning they got up to speed at the Jeepers Kart track on MiniGP bikes before heading to the VR46 Motor Ranch for yet more MotoGP eSport and Flat Track action with the YZ250Fs.

First off at the kart track, it didn’t take the protégées long to get up to speed on their YZ85s thanks to the help of instructor Marco Bezzecchi, who closely watched their riding and gave them tips accordingly.

Unfortunately, the session was cut short by 30 minutes due to a racing incident involving Valentim. He went to the hospital for a medical check. Though not seriously injured, he was advised to take it easy for a few days, so he will not be taking part in the remaining riding sessions.

After a short trip to the VR46 Store the adventure continued. All four riders returned to the VR46 Motor Ranch where they would have their first official match for Master Camp medals, in this case in the MotoGP eSport discipline. There was nothing between them, but in the end it was Bergamini who rode a flawless race when it mattered the most. Kusmierczyk came second, with Valentim closely behind in third.

In the late afternoon, they impressed teacher Marco Belli and support coach Franco Morbidelli with their ability to absorb information and put it directly into practice, even in changeable riding conditions.

“We were really worried about the weather, but finally the super funny Franco told us ‘Come on guys, let’s go!’ and he was right because we had the best conditions of the track ever”, shared Belli.

“The guys could do a lot of work, also doing work one-on-one, so we could pay attention to the questions and difficulties of each individual rider.

“We mostly used the Americana track, which is very tricky especially in those conditions, with the grip levels constantly changing. So, for me, the Day-2 performances of the riders were very positive because they all understood what they should do to achieve their goals. This means that they are becoming one with their bikes and aren’t just 'crawling’ around. I’m feeling very positive, and I’m looking forward to the next session.”

Morbidelli added, “It was a good day. There was a little bit of rain, but finally we were able to ride and had a good day. We rode well, and the guys are funny. They are nice, and their riding is also good. So, overall, it was a good day.

“We mainly focused on letting them get used to Flat Track. It’s a different discipline compared to what the guys are used to. But they are really good at catching up, because they’ve got a good teacher in Marco Belli. He taught them well on Day 1, so on Day 2 they already knew how to behave on the bike. I was positively surprised by how good they were.”

You can all watch the Day 2 Flat Track action HERE.

The MiniGP session was alright. At first, I felt pretty quick and was trying to find new lines. I saw I was pretty quick compared to the others. Then I talked to Marco Bezzecchi, and he saw my lines and told me to change it up a little bit. When I tried the new lines, I lost a bit of pace because it was new to me. I had to get a bit of a rhythm riding them. But then Enzo had a crash, and we lost a bit of time. I hope he feels better soon. But still, I learned a lot from Marco. It was a good experience.

The MotoGP eSport session was better this time. I finally got used to the physics of the game. I got some sort of rhythm going. I still made some mistakes in the race, but it was a lot more fun today because I wasn’t crashing at every point of the lap, and I took home the P2.

The flat track session was very good on Day 2. I had a couple of crashes, but I still improved a whole lot. The conditions were very difficult. It had rained plenty before we started, and the conditions were very slippery. But then, throughout the session, it was drying up little by little. Halfway through, it rained again a little, making it more slippery again, but after that the grip was immaculate. Then I found some really great rhythm and some great steam.

I had a lot of fun on Day 2 – a super day of training with MiniGP, eSport, and Flat Track. I enjoyed it a lot! In the morning we did MiniGP with Marco Bezzecchi. I gained a lot of experience thanks to him. I really enjoyed this moment at Jeepers. Then during the eSport session with Trastevere73, I won thanks to the advice that he gave me. In the late afternoon we also trained on the flat track with Franco Morbidelli. I’m very happy that he was with us on Day 2, because Franco is big MotoGP star, and I tried a lot of things on the bike with his help. I’m ready for tomorrow, Day 3!

I felt really confident with the MiniGP bike. Me and the other Brazilian rider, Kevin, were really fast, and we were battling together. We’re used to doing this, so it was really fun, but unfortunately I had a crash. I hit the wall at high speed and hurt myself. I’m okay, but I won’t be able to ride in the next few days. These things happen, but I’m hoping that maybe in another year I can come and finish the Master Camp, so I‘ll have completed all disciplines 100%.

As for MotoGP eSport, I’m really good at that game, but I lost on the last lap. I was fighting for first place, but I crashed. I still finished third, and I’m okay with that. It’s my first time with the new game.

All in all, it was a good day. Not the best because of the crash and knowing I’m not going to ride in the next few days, but it’s okay. I’m still going to attend all the sessions, watch, and have fun with the other riders. I’m going to be talking with the VR46 Academy riders, meeting them, watching them ride. That’s cool too, so it’s okay. I talked a bit with Franco Morbidelli on Day 2, and he speaks Portuguese, that’s really cool. If it stays dry on Day 3, he will join us for the soft cross session, so I think I will have the opportunity to talk a bit more with him. It’s not every day that a MotoGP rider can speak Portuguese, so it’s a good opportunity to learn and talk to him as much as possible.

It was a really good day. It went by so fast! We started with MiniGP and then moved on to eSport and flat track. MiniGP was a beautiful experience. Riding at Jeepers was a lot of fun. Having Marco Bezzecchi there to help us was the icing on the cake. We rode really fast! The MotoGP eSport session was so-so for me. I did well in the earlier sessions, but unfortunately I made some mistakes in the final race. I also noticed good improvement on the flat track, thanks to the coaching of Marco Belli and Franco Morbidelli. So, now I’m just looking forward to Day 3. I’m going into the next training with a good feeling.
Day 2 | Flat Track Video