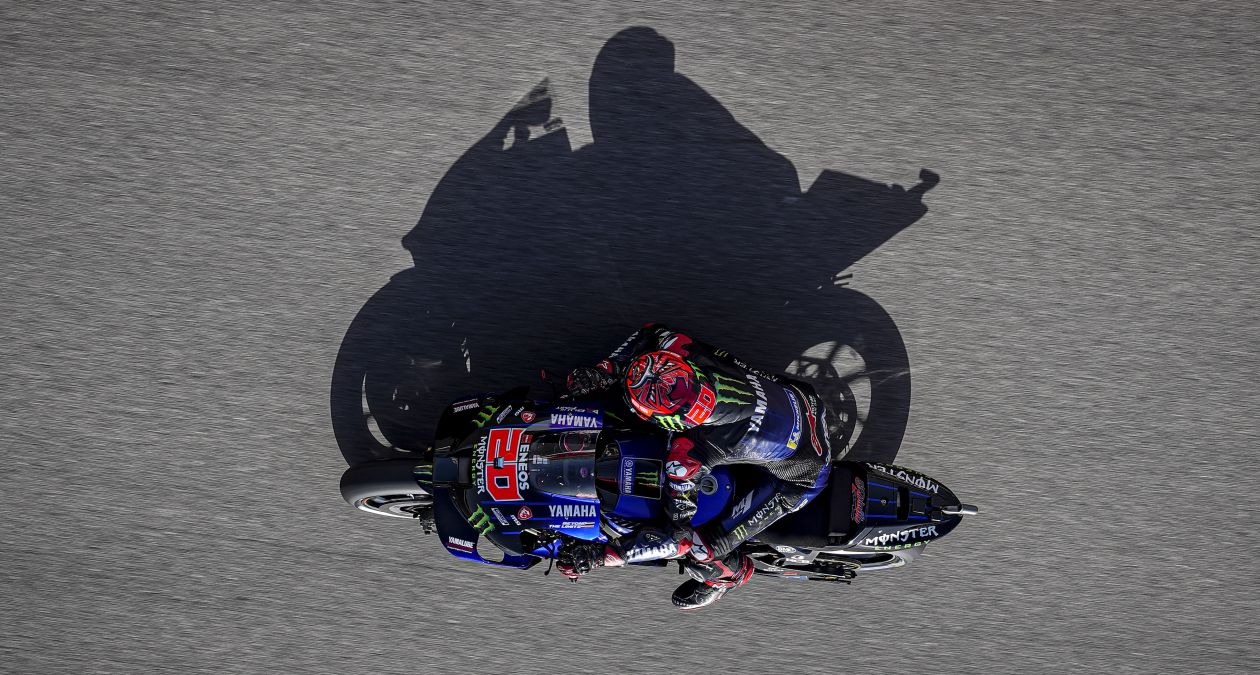 Today, Monster Energy Yamaha MotoGP’s Fabio Quartararo continued the good feeling he had in Austin, Texas last year on Day 1 of the 2022 Grand Prix of The Americas. Franco Morbidelli used the Friday free practice sessions to work on his base set-up. They took 3rd and 21st place respectively in the combined free practice timesheets.
Austin (Texas), 8th April 2022
Today the Monster Energy Yamaha MotoGP Team kicked off proceedings at the Grand Prix of The Americas event with mixed results. Whilst Fabio Quartararo secured a provisional top-3 position in the combined free practice standings, Franco Morbidelli is still looking for a set-up to his liking, ending the day in 21st place.

Quartararo had a strong start to the Texas round and soon featured inside the top 5. In perfect riding conditions, the Yamaha man focused on tweaking his bike’s set-up from last year’s race in October to suit the current state of track. He ended FP1 in fourth place, 0.443s from first thanks to his 2’04.450s best time.

Having established the resurfaced COTA track has good grip, the Frenchman went straight to work in the hotter afternoon session to prepare for Sunday’s race. He systematically found and crossed off points of improvement, before putting his crew and his work to the test at the end of the session. He clocked a 2’02.837s on his last lap, earning him third place in the FP2 and combined results, 0.295s off today’s top position.

Morbidelli was greatly looking forward to riding in Austin, but his first day of experiencing the tricky Texan track fully fit didn’t go as smoothly as he would have liked. He tried various race set-ups in FP1 but didn’t find the right feeling. His 2’05.287s best lap put him in 17th place, 1.280s from the top.

The Italian and his crew used the afternoon session to find a solid base setting. Not able to complete a time attack at the end due to yellow flags, he wrapped up the first day of the Americas GP weekend with a best time of 2’04.664s that put him in 21st place in the FP2 and the combined free practice results, 2.122s from first.

First of all, we were positively surprised about the condition of the track. Most of the bumps which last year created a lot of difficulties were smoothed out. We had a mixed day, with one rider feeling quite good with the bike in general, whilst the other one is still trying to find a set-up that suits him. Fabio had a good pace straight away and also made some changes during these two practice sessions that bore fruit. When the time came to do a flying lap, he delivered. We tried different set-ups with Franky today, but that cost us quite a bit of track time and unfortunately when he tried to do a time attack, he got yellow flags.

It's great to be in the top 3. We still need to improve our pace, but our goal was to finish inside the top 5, and we achieved it. We may have a bit of margin in Sector 2 and the last sector. I feel quite good, and I think that when I've done more laps on the soft, it will be great. The new asphalt is a totally different story compared to last year. Last time we missed the pleasure to ride, but this year we can really send the bike into corner 2, 3, and 10. We can really go fast. It's like finally we are back at COTA for real.

We are trying different things to get better, but today our pace was not that good. We need to improve. Unfortunately, I wasn't able to do a time attack, because I got yellow flags. We are quite far behind, but we will try to improve for tomorrow.