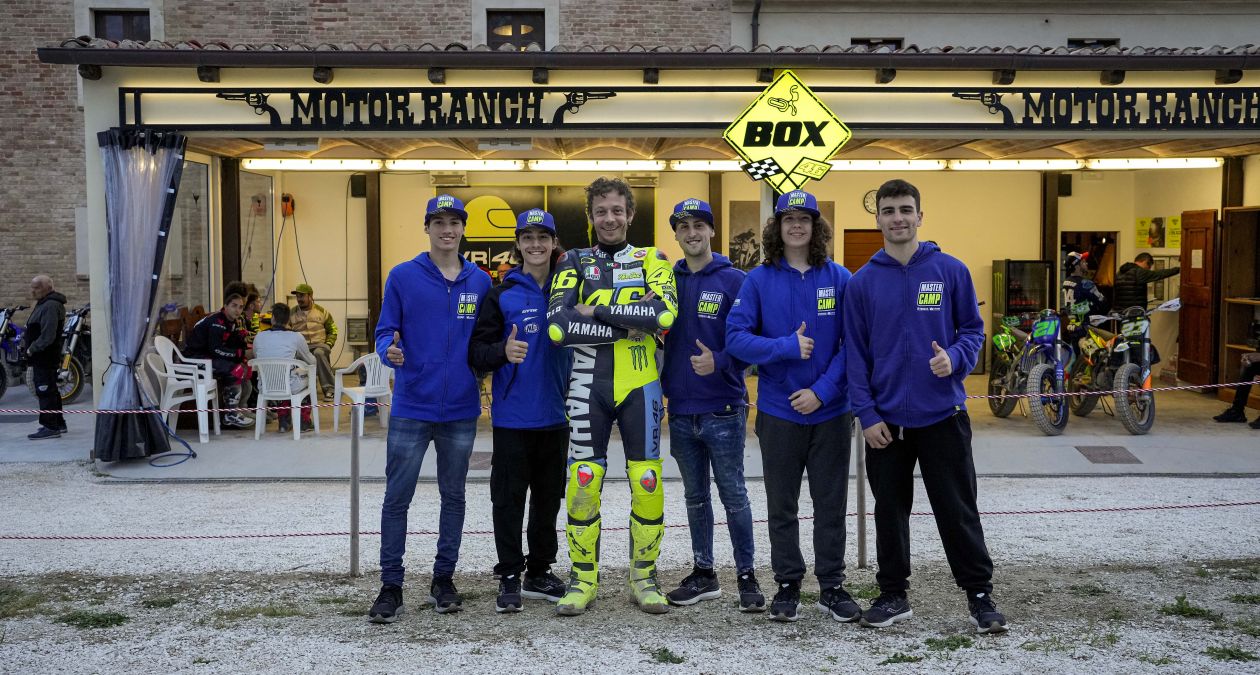 After three days of hard work, the 10th-edition Yamaha VR46 Master Camp riders had a ‘day of fun’. They let loose on MiniGP bikes and Go-Karts and were invited to the VR46 Motor Ranch in the evening to sit in on a private VR46 Riders Academy training and meet Valentino Rossi.
Tavullia (Italy), 8th May 2022
The fourth day of the 10th Yamaha VR46 Master Camp will be engraved in Jurand Kusmierczyk’s (aged 17, from Poland), Devis Bergamini’s (aged 19, from Italy), Andrea Pizzoli’s (aged 18, also from Italy), Kevin Fontainha’s (aged 15, from Brazil), and Enzo Valentim Garcia’s (aged 17, also from Brazil) memories as the day that they got to meet their idol Valentino Rossi at his VR46 Motor Ranch.

The day started off as normal with the riders heading back to the Jeepers Kart track to test their skills in a MiniGP Superpole. Day 2 MiniGP coach Marco Bezzecchi visited the session to check on their progress. It was a close battle, but ultimately the honours went to Fontainha, with Kusmierczyk and Bergamini finishing in second and third place respectively.

It was then time for a Master Camp premiere: the first ever ‘mixed’ Go-Kart race at the Go Kart Misano - Riviera Verde in which also Master Camp staff members were allowed to participate. As expected, the riders were no match against the staff with again Fontainha taking first place in the overall results, this time with Bergamini taking second ahead of Pizzoli.

After a short ice cream break, it was time for the main event. The riders headed back to the VR46 Motor Ranch, as they were specially invited to look in on a VR46 Riders Academy training session and Americana match-off from the sidelines. Flat Track coach Marco Belli was by their side to walk the track and point out technical skills that could be useful for their final Flat Track training on Day 5.

Meeting their idol was the icing on the cake for the riders. Rossi soon made his way to the Master Camp crew to shake hands with the students, who he had been following from a distance over the last four days.

You can watch the happenings at the MiniGP and Go-Kart tracks in the Day 4 Video.

Additionally, we have caught on camera the moment that the Master Camp riders meet Rossi.

I made a really big step forward with my thinking on track and my riding. I started the session a lot slower than I did two days earlier on the MiniGP bikes. This was a tip from Marco Belli, and it had the desired effect. I was able to practise the lines more, so later when I was pushing, I was much more confident and was able to get more performance out of the bike. I got second, and honestly, I felt like I still had something left in the tank, so I could have challenged Kevin for P1.

In Go-Kart Race 1, I was battling with Kevin, and I spun. I still managed to recover a position, but that was it. In Race 2, I improved my time a lot. I couldn’t get into the fight for the podium, but it was still better than Race 1.

Day 4 was a day filled with a lot of fun. First, in the morning, we went to Jeepers Kart to ride the YZ85 again. It was a wet track, and we were riding on slicks. That was difficult, but it was actually really good training to get a good feeling with the bike. I had fun, and in the end I came third, which is a good result. Then in the afternoon, we did a go-kart race with the riders but also the crew at Riviera Verde. It was so nice to have a battle, and I got second place. Then we went to eat ice cream at, in my opinion, the best ice cream store in Cattolica: Cremeria di Via Mancini, my personal recommendation. And in the evening, we went to the Ranch to watch Valentino and the VR46 Academy Riders train. That was amazing! To see them train at the track that we also trained at and watch how they do it, that was special.

It was a lot of fun for me to ride at the MiniGP track, especially because I missed Day 2 and hadn’t ridden a two-stroke bike for a long time. It was really fun, apart from when I crashed during my Superpole lap. During the kart race I had a big battle with Kevin, which again was lots of fun, and this time I came third. But the evening was the best. It’s a truly unique experience – something that words can’t describe. It was the most beautiful thing to see in the world for a rider. Especially the last Americana race gave me goosebumps.

I had an amazing day! I won the MiniGP Superpole and also the Go-Kart race! That was really great, and the day got even better when in the evening we got to see Valentino and the VR46 Riders Academy train at the Ranch. That was incredible! They were so fast in the training, really went all-out! So, all-in-all it was a really good day, and it has inspired me for the final training session at the Ranch on Day 5.

In 2019 we had a race at Termas de Río Hondo, at the Argentina GP, and I met Valentino there. But it was only very short, there was no time to talk of course, because it was a busy race weekend. But to meet him here at his home and watching them race at the end of the training session – that was something so special! I didn’t record anything on my phone, but this will live on in my memory forever. Meeting the person who made me start racing, watching him ride, and being so close to him, that’s special. He was so nice as well, taking photos with everyone. So, I’m just really happy to be here at the Master Camp.

Even if I’m not riding, this experience will be so good for me because it’s my first time travelling without my parents, so it’s a new experience. I will probably have grown a lot as a person and as a rider this week. So, I’m just happy to be here. Unfortunately, I couldn’t finish all the riding sessions due to the Day 1 MiniGP crash. I don’t know if I’ll ever get another opportunity to finish the Master Camp training, but regardless of that, what I have learned here will last forever.

These last two days I’ve been trying to help my teammate Kevin as much as possible. He’s from Brazil, I’m from Brazil. I’m not riding, so I’m trying to help him out in the best way possible. Even without riding, it’s so special being here. It will be a part of my soul for the rest of my life.
Day 4 | MiniGP and Go-Kart Video