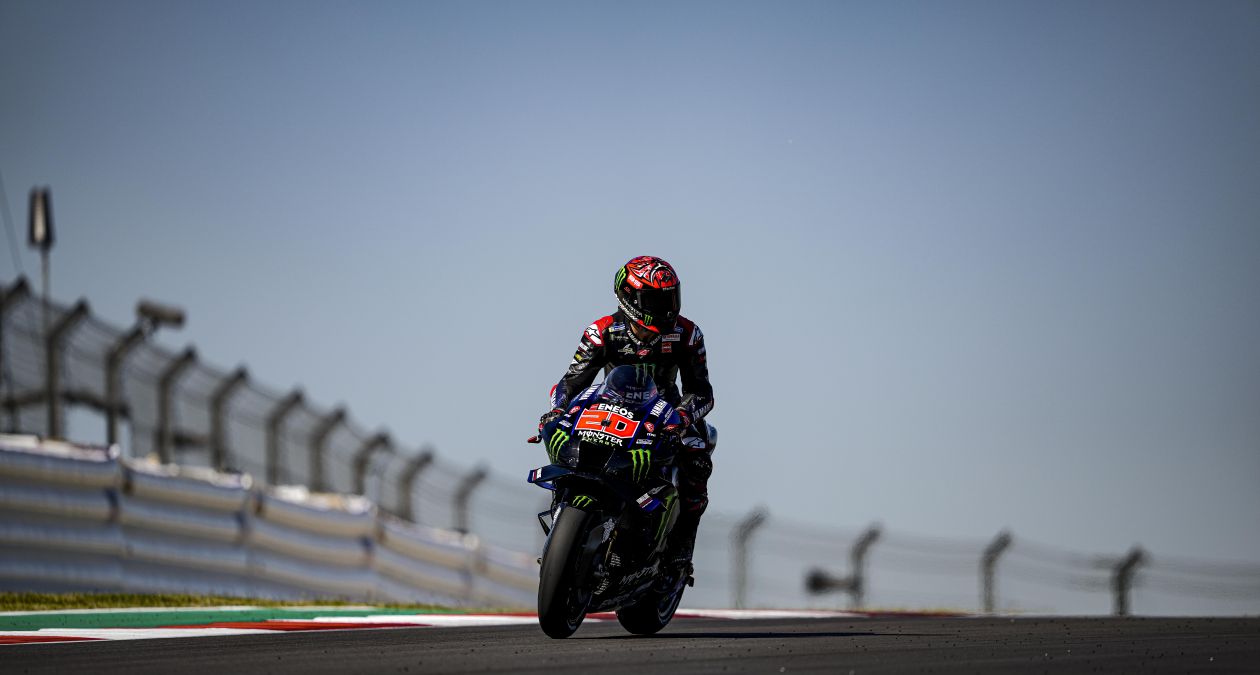 Today’s qualifying sessions at the Circuit of The Americas didn’t go to plan for Monster Energy Yamaha MotoGP. Fabio Quartararo suffered a crash on his first run. Fortunately unhurt and quickly back out on his second bike, he earned himself P6 on the grid. Franco Morbidelli had a better feeling in FP4, but he struggled to reproduce it in Q1. He will start the race from P19.
Austin (Texas), 9th April 2022
The Monster Energy Yamaha MotoGP team faced some setbacks in today’s COTA qualifying sessions. Fabio Quartararo took part in Q2, but a crash cost him vital time. He rejoined the session on his second bike, taking 6th place. Franco Morbidelli had a good FP4 session but didn’t feel the same confidence in the bike in Q1. He will start tomorrow’s Grand Prix of The Americas from 19th on the grid.

After topping FP3 and riding a solid FP4, Quartararo was feeling pumped for the Q2 heat. His first lap earned him provisional fourth place. Eager for a front-row start, he dug a little deeper. He set one red and two orange sectors when he had a crash in Turn 19.The rider was quickly back on his feet and hurried back to the pits.

With a little less than five minutes left, the Frenchman started his second run on his second bike and showed no sign of slowing down. He was in eighth place at the time but soon moved up to provisional fifth with a 2’02.634s, only to be pushed to sixth later on. He had one lap remaining but wasn’t able to better his time. He kept hold of sixth place, 0.595s from pole, and will be starting from the second row.

Morbidelli was one of the first riders to start the Q1 session. It was part of his strategy, as a lap around the COTA track takes over 2 minutes, so there was no time to waste. The Italian’s first 2’03.579s hot lap put him in third place. He had to find over 0.6s to bridge the gap to the top 2. Unable to better his time on his next try, Morbido entered the garage for a fresh set of tyres with eight and a half minutes left on the clock.

Two and a half minutes later, the Yamaha man resumed his mission. He gave it three more goes but didn’t improve. He finished the session in ninth place and will start tomorrow’s race from P19.

Another mixed day for us. We had a positive FP3 and FP4 in terms of pure pace and speed with both riders. Franco had definitely a better feeling on the bike than he had yesterday, and he missed Q2 by less than 0.1s. Fabio was able to work on rear tyre race distance with good indications. It’s really a pity that on Fabio’s first time attack, while he was pushing at his maximum, he lost the front. But it’s impressive what he did! He left the garage with four minutes to go and was able to improve immediately on his first lap on his second bike, securing a place on the second row. It was a different story for Franco, who suddenly had no confidence with the front. That spoiled his session. We expect that it will be a hard race, but we will try to be in the game and play a prominent role.

I tried my best. I knew that if I wanted to have a great race tomorrow, I needed to take a risk. I pushed 100%, but then I crashed. I also tried my best on the second run, and I did do better, but in Sector 1 I made a lot of mistakes. I did improve in Sector 3 and 4, but when it’s getting hot, we struggle a bit more with grip. In the end, I’m still happy. I did my best, and a crash can happen sometimes. I think we will have to give our maximum from the beginning of the race tomorrow. Let’s see what happens when tyre degradation comes into play. We are not so bad, so we will see what we can do. I want to have a good race, have fun, have a good start, a great first lap, and manage to improve.

It was an interesting day, in the way that in FP4 the level was not that bad. I felt much better than yesterday. In FP4 the pace didn’t look so bad. It wasn’t wonderful, but it wasn’t bad. We were still up there, so it was interesting. But in qualifying we were nowhere. I couldn’t push. I couldn’t extract performance from the package. That’s unfortunate, but the team is investigating it. We are working, we’re trying to understand what happened and how to make sure it doesn’t happen in future.