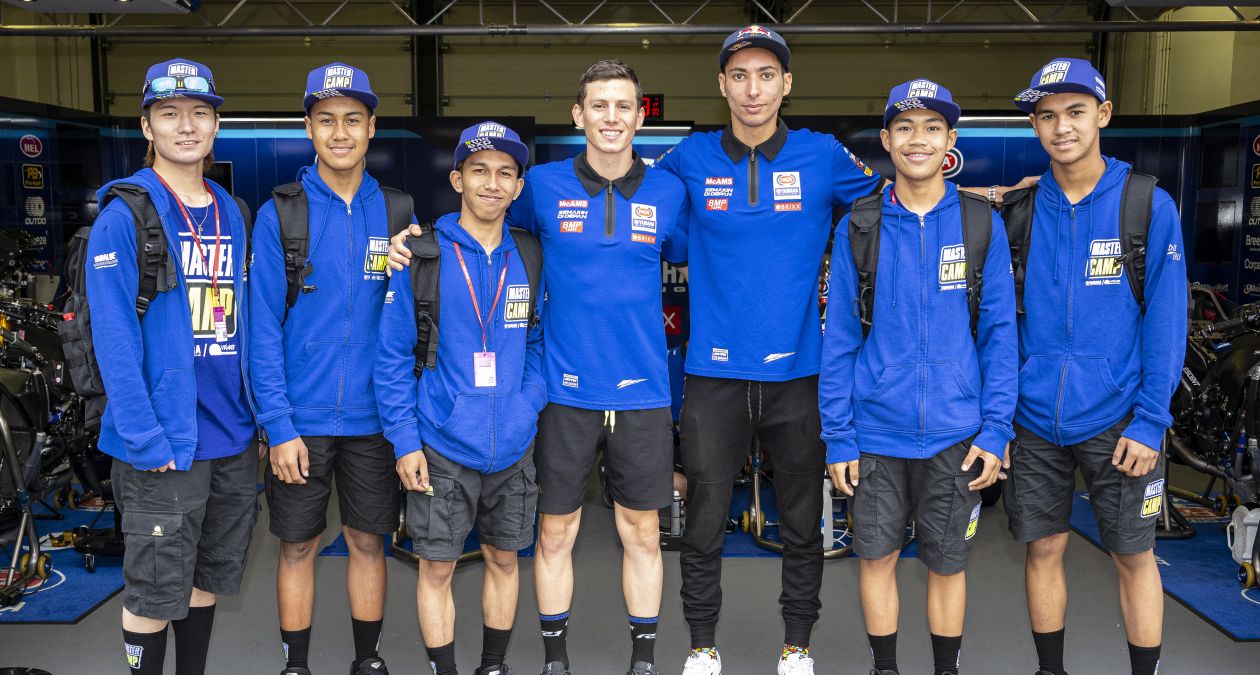 Due to the horrific weather conditions and standing water, the students were later unable to ride at the Pomposa Circuit on YZF-R3 bikes like originally planned. However, not letting any precious Master Camp training time go to waste, they opted to go to the Fisio Gym and focus on stretching to help their bodies recover from the intense Day-2 Flat Track and Soft Cross sessions. They ended the day with a friendly match of basketball and balance training, and briefly hanging out with VR46 Riders Academy's Niccolò Antonelli and Marco Bezzecchi.

To relive the activities of the Day 3 click HERE.

A new Day-2 eSport video can be found HERE

I’m so excited that we got to visit the Misano World Circuit. I saw the Yamaha hospitality and areas in the paddock and met Toprak and also Nozane! I was amazed at the hospitality. The Yamaha staff were all so kind, and I felt thankful for the warm welcome they gave us. The highlight was that I took a picture with the WorldSBK World Champion.

The gym session after that was good too. I feel more flexible thanks to that second session.

I was greatly looking forward to visiting the legendary Misano World Circuit. I was so surprised to see Toprak in the paddock in real life. I had never expected to meet Toprak and Nozane, but we met both! Other than that, I noticed how staff collaborated in the WorldSBK paddock, I saw the great teamwork. I felt so good and welcome there, also in the hospitality.

I’m starting to realise that it really is better to go to the gym on a more regular basis. It helps me improve my muscle flexibility.

It was my first visit to the Misano World Circuit, and I’m very happy that I got the opportunity. At the circuit I met Superbike riders Toprak Razgatlıoğlu and Andrea Locatelli. In the paddock I admired some amazing motorbikes that made me dream of becoming a part of that paddock someday. It is fantastic to meet so many top riders. The food was delicious too!

On Day 2, I pulled a muscle while riding on the flat track, but the second gym session helped me relieve the pain.

My first visit to the Misano World Circuit was very emotional. It’s so special to be in the very place where the Italian World Champions started and grew. There I met top riders Toprak Razgatlıoğlu and Andrea Locatelli. The track is beautiful, and the paddock gave me an incredible sensation. It was fascinating! It was wonderful, and it was very different from any experience I’ve had before.

The second gym session wasn’t only great but also much needed to recharge my energy, because I had used all I had during the riding sessions on Day 2.

The most impressive thing at the Misano World Circuit was the size of paddock. There were so many people, and I found that the World Championship level paddock was different from the environment I’m used to. In the box, it was amazing. There were four well-polished shiny motorcycles for two riders. The hospitality was wonderful because it was spacious and well-equipped.

At the gym, stretching was very good because I was able to do exercises I don’t usually do. After that, I enjoyed the balance board and basketball. I like to skateboard, snowboard, and play basketball in my spare time, so I did well on both.
MC11 | Day 2 Video - eSport