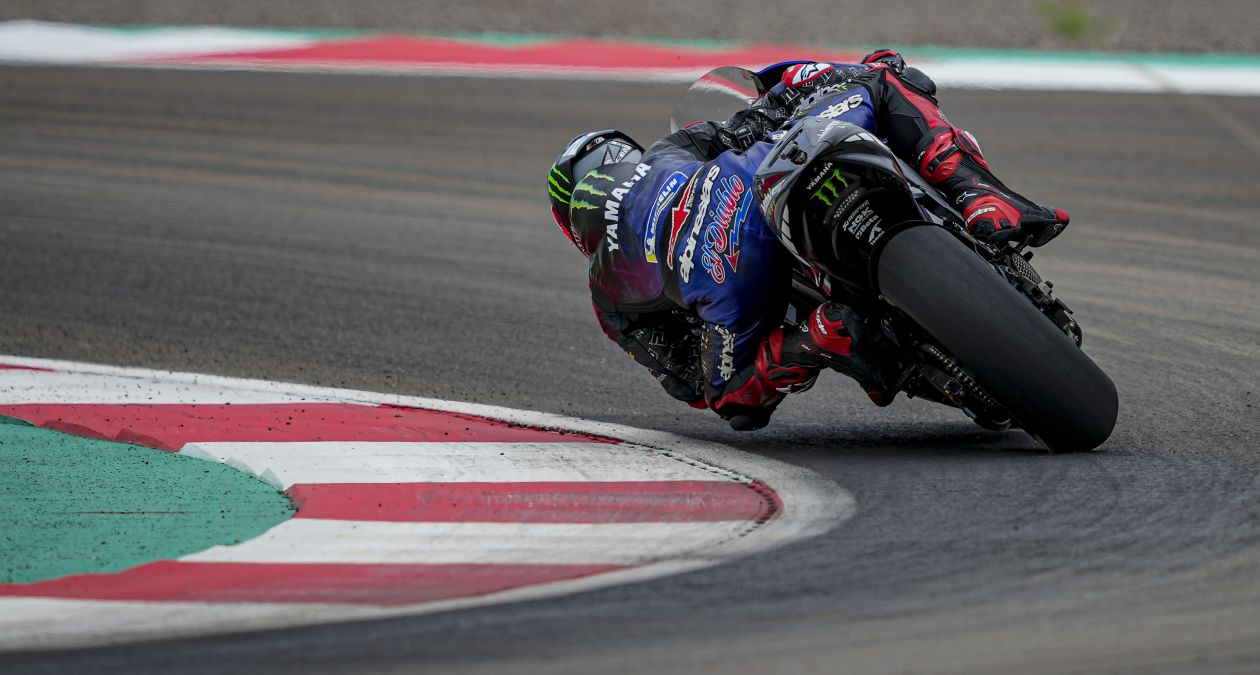 Monster Energy Yamaha MotoGP Get Familiar with the Mandalika Track

The Monster Energy Yamaha MotoGP Team have been looking forward to this day for months. Today, Fabio Quartararo and Franco Morbidelli got their first laps in at Indonesia's new Mandalika circuit and secured 5th and 12th place respectively in the Day 1 results.
Lombok (Indonesia), 11 February 2022
Monster Energy Yamaha MotoGP’s Fabio Quartararo and Franco Morbidelli resumed their 2022 MotoGP pre-season testing programme today. The teammates used the first of the three riding days in Indonesia to get a feel for the new Mandalika circuit and confirm their findings from last week’s Sepang Test. They took 5th and 12th place respectively in today’s time sheets.

Originally, testing at the Mandalika track was supposed to take place from 09:00 to 17:00 local track time every day, but due to overnight rain Day 1 was off to a wet and muddy start. The session was red flagged and later extended until 17:45 to compensate for the lost time during the clean-up in the morning.

Morbidelli was quick to head out to get a first feel for the track. Though he was mainly concerned with building on his findings from the previous testing days in Malaysia in the afternoon, he steadily improved his feeling with the bike in the final hours on track. His fastest lap, a 1’33.518s, set on lap 67/75, put him in 12th place, 1.052s from the top.

To be honest, I’m really happy because this morning was really tricky. The conditions were kind of like motocross. In the afternoon I felt much better, our pace was super strong. I set my fastest lap with 16 laps on the medium rear tyre, so I’m super happy actually. And we still have two more days. We tried the aero package and rear settings again, and it was working well, so I am happy, but most of all about my pace with used tyres. I think this circuit is kind of like Qatar and Thailand, with a little bit of Argentina on the last heavy braking. I think it’s a nice mixture of corners. I don’t consider any track a ‘Yamaha track’, because I think that’s a mistake. I see this as a normal circuit, and I give it my best shot, this is the best mentality.

It was a good day today. We improved the feeling much more compared to Sepang. It showed that I’m getting more and more in tune with my new Crew Chief Patrick. He did a great job today; we improved the bike a lot and I feel much better. Now, we keep working to understand a few more things and improve the feeling with the bike even more, but so far, so good. For sure, the track is new, and there are spots on the track that aren’t so good, like Sector 2. I lose everything there because it looks like today I didn’t manage to get it right, but finally I feel good with the medium tyres. We tried the soft tyres at the end, the speed was good with both. We also tried the medium front, and I felt also quite okay with that, so we are spreading our performance on different tyres and with different things, so I would say that it was a good day.