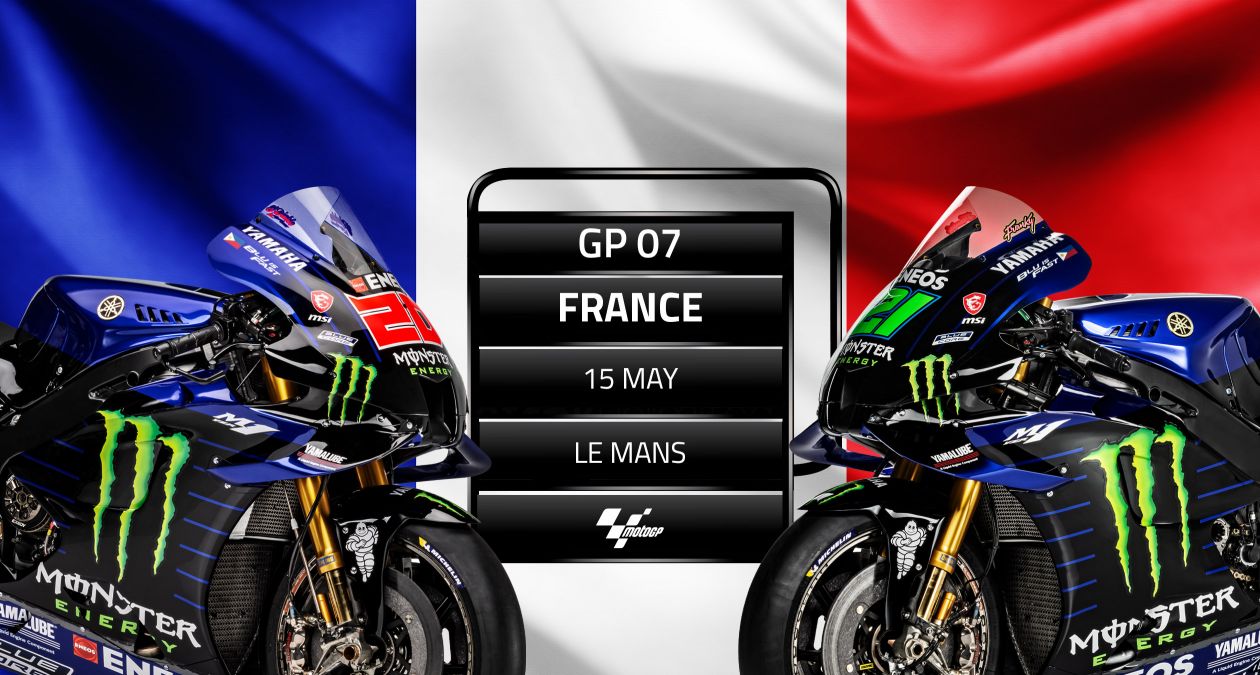 Monster Energy Yamaha MotoGP teammates Fabio Quartararo and Franco Morbidelli are heading to France for the seventh round of the 2022 MotoGP World Championship, held at the Le Mans Bugatti Circuit this weekend.
Le Mans (France), 11th May 2022
The Monster Energy Yamaha MotoGP Team are ready to put up a fight at the Le Mans Bugatti Grand Prix race circuit for the honours of this weekend’s Grand Prix de France.

The seventh round will be important for home hero Fabio Quartararo, who is currently leading the championship standings by 7 points. However, the pressure is only stoking the fire within him even further.

Knowing that the Bugatti track suits the YZR-M1’s nimble character, El Diablo is feeling positive about his prospects for this weekend. He would love nothing better than to make the French fans proud and improve on his third place from last year, secured in wet conditions.

After six rounds, Franco Morbidelli holds 16th in the championship standings. Keen to move up the order, the number-21 rider’s goal for this weekend is to pay a visit to the French rostrum again like he did in 2017 when he won the Moto2 race there.

The Italian is eager to give the set-up improvement from the Spanish GP warm up session another try, in order to confirm its effectiveness. However, with the predictions for the weekend’s weather uncertain, there's a good chance that he will also be working on the wet weather set-ups.

The Bugatti Grand Prix race circuit was built in 1965, just a few kilometres from the city of Le Mans. MotoGP made its first visit to the iconic French track in the late sixties, and it remained a fixture until 1996. After some safety modifications, the 4.2km-long circuit was added back to the calendar in 2000. Its lay-out of five left and nine right corners places the emphasis on late braking, hard acceleration, and rear-end traction, which makes for some great battles.

Those who want to refresh their memories of what a lap around the Bugatti track looks like can watch MotoGP eSport riders Lorenzo Daretti do a ‘comeback race’ in this week’s eLap video.

We are now heading to Le Mans. This could be another good opportunity for us. For Fabio this is a special event because he arrives at his home race as the current World Champion and the current standings leader. He will use this as an extra boost to keep his persistence. Franky left Jerez with a lot of confidence because of the feeling he finally found with his bike. He is really looking forward to this GP and to him it's like the real start of the season. Moreover, we might use some settings and items that we were able to try in the Monday Jerez Test with positive feedback. We can't wait to start FP1.

The second place in Jerez was a good result, but I would be lying if I said that I didn’t want to win. I actually came really close, so I’m now looking forward to a rematch in Le Mans. I’m feeling positive about this weekend, but we will see what happens. It’s been an unpredictable season so far. Anyway, it’s my home GP, so for sure I will push to the limit and give it my all. Hopefully we'll have nice weather.

This will be an interesting weekend for us. We have tested quite a lot of things in Jerez, and I’m curious to see if what we found at the test there will work here too. Actually, I had pretty good lap times towards the end of the race in Jerez, but the issue was that we started from too far back on the grid, so that’s what we need to work on for this weekend. If we can correct this, I think we can do a good race here in Le Mans.