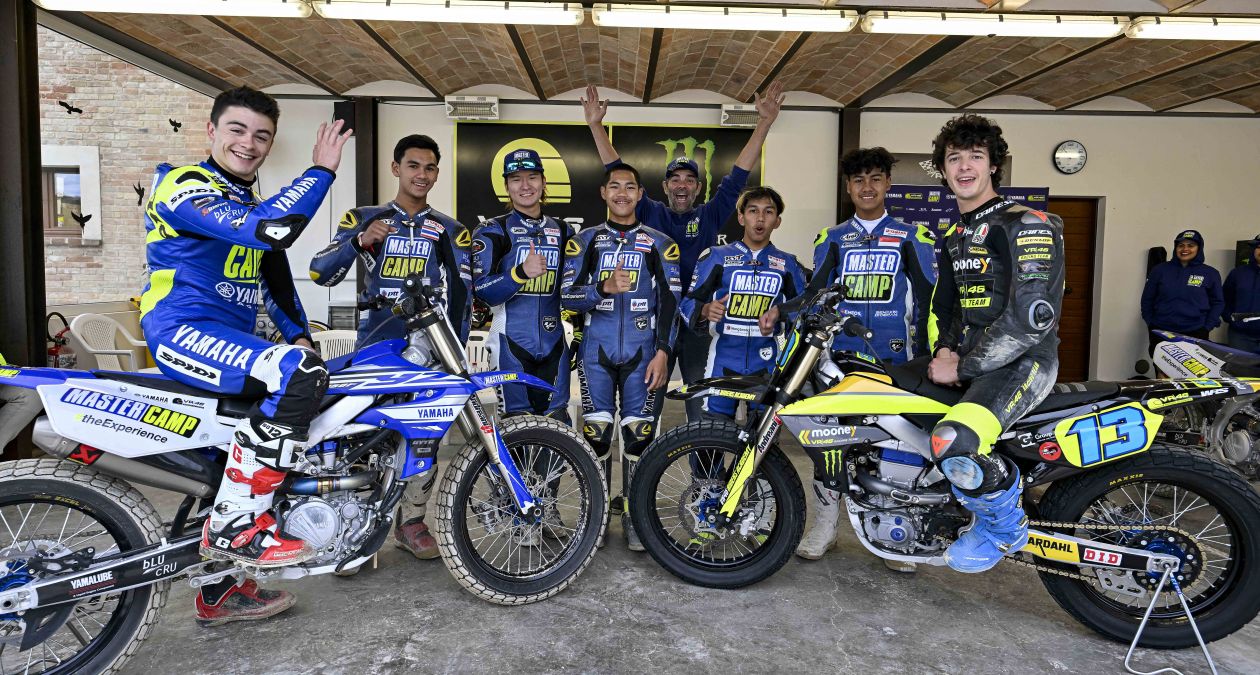 Flat Track instructor Marco Belli had invited Celestino Vietti (Catalan GP Moto2 winner) as co-coach for their final Flat Track session, but there was another surprise guest: Yamaha VR46 Master Camp Team Moto2 rider Manuel Gonzalez joined the Flat Track lesson, riding with the students. With clear instructions on what to pay attention to, the riders went all out during the practice session before it was time to do a superpole and a race over the entire circuit as well as an Americana. In the end, Aldi Satya Mahendra secured first place again in the overall result. Maiki Abe came second and Worapot Thongdonmaun third.

Coach Belli was very pleased with the progress that was made.

“We did an Americana race and a five-lap race on the full track. The lap times were really good. Of course, at the end, you end up with one guy in first, one in second, and one in third, but to us they were all winners because the progress they made was great. To me, that’s what makes this one of the best Master Camp editions because we can see the difference a few training sessions make.

“As for Manu, he didn’t have that much experience at this track yet and was riding on a different bike than his personal one. He had to adapt his riding style accordingly, but it only takes guys like him a couple of laps to understand everything. He was riding super aggressive immediately, and it was good to have him ‘race’ against the other guys and overtake them, disturbing their rhythm. Also showing the line, then stop, showing the line again. That’s all stuff they needed to learn.”

In the afternoon, after a quick shopping excursion at the VR46 Store in Tavullia, the riders headed to the Jeepers Kart track to test their skills in a MiniGP superpole. Gonzalez took over the instructor role here and helped them find the right lines and corner speed. It was a close battle, but ultimately the honours went to Aldi Satya Mahendra again (so far he has won the eSport, Flat Track, and MiniGP gold medals) with Passkon Sanluang and Worapot Thongdonmaun finishing in second and third place respectively.

To relive the action and the MiniGP activities of Day-4 click HERE.

The feeling at the Motor Ranch was incredible! It was my second time there and it’s still very difficult, but I learned more today, although the bike was different from the other time. To come here is always a dream, and I hope to return to Vale and the VR46 Riders Academy guys soon.

The Master Camp guys surprised me a lot, both at the ranch and at the Jeepers Karting track. They were very fast and skilled in both disciplines. At the ranch they almost beat me, so maybe next time we can race each other!

Being a coach in the afternoon with the YZ85 bikes was very nice for me. It’s a bike that I know very well, so it was pretty easy to show the guys how to ride. The track is small, so they struggled a bit at the start to ride the ideal line, but they improved a lot. I showed them some tricks to go fast with the MiniGP bikes, and they learned it fast, so I am happy! They followed me without any problem.

I felt more comfortable when trying Flat Track for the third time. I learned lot from Manuel Gonzalez because he was out on track with us. I learned how to use the brakes and the gears more efficiently.

I was so excited to visit the VR46 Store. I really enjoyed shopping. It’s a nice shop! They stock a lot of VR46 products that everybody would dream to come check out.

I enjoyed the MiniGP session so much! Like, a lot! It’s good practice and thanks to Manuel, I have learned how to use gears better there too and was able to follow the right race lines.

I felt more comfortable and in control of the Flat Track bike on Day 4. I now know how to brake well and feel more secure to get up to speed. I am now using higher gears more, and I learned the right lines on the flat track by copying the instructors.

I also enjoyed the MiniGP session so much! It was fun because those YZ85 bikes are easy to ride, and it’s good practice.

The VR46 Store was also cool. I love it because I also enjoy shopping.

I enjoyed doing my last Flat Track session with Celestino Vietti and Manuel Gonzalez. It has been wonderful to practise at the VR46 Motor Ranch. It has been a privilege to learn from such a great teacher as Marco Belli. I’m also very proud to be the winner. I hope to continue improving my riding style.

I feel great because in the Mini GP race I gained the gold medal - my third! Thanks to the interaction with Manuel Gonzalez, I have become proficient in riding the Yamaha YZ85, which is not so easy to handle, but I did it! I had a great time.

I was also very happy to go shopping at VR46. They have many beautiful things that we can’t find in Indonesia.

The final Fast Track experience with Celestino Vietti and Manuel Gonzalez has been fun. During the very challenging race, I tested myself against these exceptional riders, and I learned how to better control the stress of competition. I wish to thank Marco Belli, who is a fantastic teacher. I will continue to follow his teachings and instructions when I’m back home in order to continue improving.

The MiniGP was hilarious. I learned from Manuel how to be faster on the circuit and save time.

Shopping at the VR46 Store is fun. You can buy amazing things there that aren’t available in Malaysia.

During the final Flat Track session, Celestino and Manuel advised me to turn in the corners in a higher gear, and I tried to put it into practice in the race. Because of that, I fell off my motorcycle on the first lap, and I lost points. At the end I was in second place, but I'm glad I tried it. I really enjoyed the session.

The MiniGP session was my first ride on a two-stroke motorcycle and also MiniGP bike. Thanks to Manuel’s advice on riding style, I tried to sit in the front part of seat. In the end, I was able to do that! So it was a great experience that leads me to the next step.

As for the VR46 Store experience: there are so many good products related to Valentino Rossi! I enjoyed shopping there. I’ve been wanting to for a long time.
MC11 | Day 4 Video