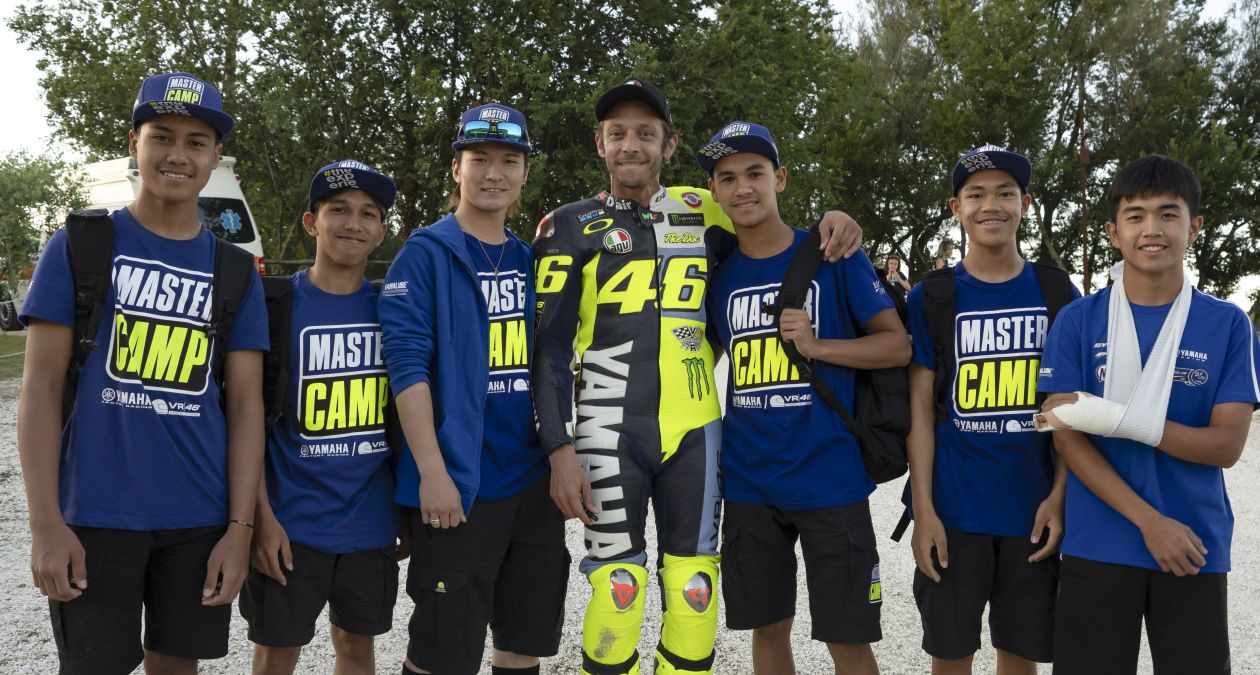 When the students arrived at the Galliano Park track in the morning, they found their YZF-R3s already nicely lined-up. But first they were asked to join a rider briefing on the track’s lay-out with instructor Alberto Surra and Manuel Gonzalez.

As Galliano Park is quite twisty and technical, the young recruits needed a few laps riding behind the instructors, also to get used to the YZF-R3 bikes. But they quickly got the hang of it and started to have fun, making the most of their Pirelli tyres. Aldi Satya Mahendra set the fastest time, making it a full house (he won the eSport, Flat Track, MiniGP, and R3 gold medal) with Passkon Sanluang and Maiki Abe finishing in second and third place respectively.

"I really had fun with the Master Camp riders", said Surra. "For sure, some of them still need to improve, but that's understandable. They had never ridden at this track before and also had no previous experience on the R3s. But one of them was really fast! It's been a very nice morning, the guys were kind and nice to talk with. We had fun!"

Then it was already time for the final event: the traditional VR46 headquarters guided tour and the graduation ceremony. The riders watched a summary video of the last five special days before being handed their official Yamaha VR46 Master Camp Certificate of Attendance. Of course, the Master Camp wouldn’t part from the riders without presenting them with some extra gifts from VR46.

But they had one more surprise in store for them. They were specially invited to look in from the sidelines on a VR46 Riders Academy training session and Americana match-off. Their idol, Valentino Rossi was happy to shake hands with the latest graduates who, he had been told, greatly impressed all their instructors with their dedication and progress.

Moreover, the team wishes the latest five Master Camp graduates all the best in their racing endeavours.

Master Camp supporters can watch all the YZF-R3 action of Day 5 HERE.

This Master Camp has flown by again! We are all very proud of what these five riders have achieved. At the start of this experience, we had asked them to show dedication, soak up as much information as they could, and also show patience when it comes to the learning process. All the instructors and trainers agree that this has been one of the most successful editions of the Master Camp in terms of the progress we saw new graduates make in less than a week time. We are happy that these last five days have inspired them to amend their training sessions once arriving home, and that they feel that the tips they got will help them make the next steps in their racing careers. Their hard work was rewarded today with the special honour of meeting Valentino Rossi at the Motor Ranch. I'm sure that it was an experience that they will never forget - also for Vale, since he had been eager to see the son and father of Norifumi Abe, who was such a big inspiration to him.

Again a really nice morning with the Master Camp guys. We tried a new bike and a new track, which is always challenging for everyone. They were fast like yesterday, so we could enjoy the experience a lot. Thanks to Yamaha for inviting me to join these two days. I hope to return soon!

It was fun to ride the R3, learning to change direction quickly and brake control. The tyres had good grip and that allowed me to turn quickly.

I was excited to go into the VR46 headquarters and see a lot of bikes and things. It was very special. I feel proud that I was chosen to join the Master Camp programme, and I’m very happy to receive my graduation certificate. This is a highlight in my life.

It was very impressive to learn and practise with professional racers. And I was glad to meet Rossi and see him ride. He rides really fast! I’m so happy that I was able to meet and ride with world-class racers.

The R3 bike that I practised with on Day 5 was very good. I was working on using the brakes and perfecting the acceleration in corners.

I am very happy to have been a part of the Master Camp, and when I received my degree, I was very happy. I feel so lucky to have been training with coaches who teach world-famous athletes. I hope that in the future I can work as hard as I did here in my own country to keep developing my skills, because riding in the Moto2 World Championship is my dream, maybe even as a part of the Yamaha VR46 Master Camp Team!

It was nice to meet Valentino Rossi. He is a very kind person, I like him very much. And his training is very good. I recognised the skill and techniques that we were taught. I'm going to practise it in the hope that I can be like him and the VR46 Academy riders.

But now I feel devastated. Having been together for six days, I feel very good here. This makes me not want to go back home. But I have to go back to develop further. I want to say ‘Thank you for everything’ to everyone who helped make this programme possible.

I enjoyed riding an R3, something I have never tried before. I tried an R25, which is similar although with different cc. With the R3, I have learned to ride on a narrow track, and it is a lot of fun. Like the other guys, I’m already used to riding with Pirelli tyres, so that was good, because we knew we could ride fast.

Browsing around in the VR46 offices was an amazing surprise. Obviously, I am very happy to have received the diploma, but at the same time I feel very sad: time flew by so fast...

My experience at the Master Camp has been invaluable and very enjoyable. For us young riders who are motivated to learn and improve our skills for our future careers, this programme is such a memorable experience. The teaching has been excellent and highly professional. We experienced every aspect of riding, and this is crucial if you want to become a professional rider. Above all, I liked Fast Track the most. Besides that, on Day 5 I won another gold medal – those were all 'training' highlights. Meeting Valentino Rossi has been a magic incredible moment. Watching the Americana race, I have understood how Valentino rides a Flat Track.

I want to thank all the people of the Master Camp for all the teaching and care, and I hope to put what I have learned here to the best use.

I had never ridden an R3 before, and it was an incredible and challenging experience. I have learned that I can ride on a narrow track too. I have used Pirelli tyres before and it is the right tyre to run on a circuit like this one. It makes the turning very easy.

The VR46 office is big, beautiful, just incredible. I’m touched by the kindness of all the staff, and Signor William was right when he said that for something to turn out for the best, you need to involve your entire heart in it. I’m super happy for having had this opportunity. It’s very precious for us young riders to learn the correct ways and improve our skills in order to become the best.

The biggest highlight for me was the motocross session. Motocross is special to me: it’s thrilling and adrenaline-filled, a lot of fun! And I cannot believe I met Valentino Rossi, my living idol. I hope one day I will be a little like him!

Riding at Galliano Park was my first experience with Pirelli tyres. I haven't used them enough, but I found the grip was good. It was also my first R3 ride. Since R3 has less power than I’m used to, it was hard to find the racing lines. But I’m happy I finished third.

The VR46 headquarters is very spacious and a beautiful building. There are many MotoGP motorcycles! Visiting there, I'm very motivated to join this team in the future.

The graduation ceremony was a very good time to look back on our six days here in total. It was only six days, but they were fulfilling days. I was satisfied with what I learned and what I accomplished.

Throughout Master Camp, I overcame challenges and learned many new things, such as riding new types of motorcycle, racing at new circuits, and ride with VR46 Academy's professional riders. The biggest highlight is the final part. When I visited the VR46 building and saw many MotoGP motorcycles, I felt a confidence that I will join this team in the future! So I have to stay motivated, and I'll do my best to make it happen.

Meeting Valentino Rossi on the last evening is a moment I will never forget! When I was in front of him I realised that it was him, the rider that I always saw on TV - it did not seem real. During Valentino's training, I took note of his changing direction technique: the perfect lean angle, sliding, and his beautiful lines.