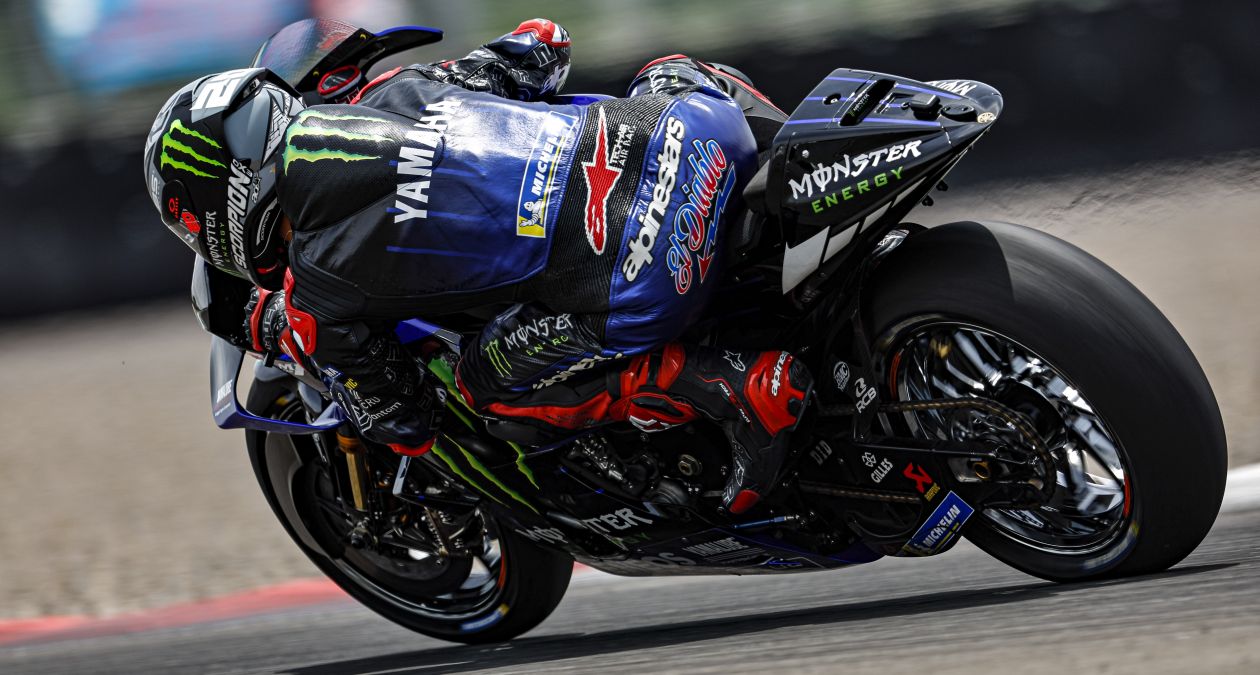 Monster Energy Yamaha MotoGP wrapped up the second and final official IRTA test of the 2022 season today at the Mandalika Circuit in Indonesia. Fabio Quartararo and Franco Morbidelli wrapped up the three days of testing in second and fifth place respectively in the overall standings.
Lombok (Indonesia), 13th February 2022
Monster Energy Yamaha MotoGP’s Fabio Quartararo and Franco Morbidelli completed their 2022 pre-season testing programme at the Mandalika Circuit today. The third consecutive session was crucial to collect some final data on race simulations and time attacks. They ultimately took second and fourth place respectively in today’s timesheets and second and fifth in the overall MotoGP test results.

There was a slightly amended time schedule today, as the track was cleaned between 13:15-13:45 local time (GMT+8).

This morning Quartararo picked up where he left off, on only his 18th lap he set a 1’31.275s that put him in second place. Following the track cleaning, he worked on the race pace of his YZR-M1. He completed an 18-lap race simulation and then readied himself for one final shoot-out on soft tyres at the end of the day. His 1’31.074s, set on lap 77/79 kept him in second position in both today’s and the overall results, 0.014s from first.

Morbidelli used the final day of pre-season testing to mainly work on his feeling with the front of the bike. It was the preparation needed for the Italian’s final push. In the closing minutes of the session, he committed to one last time attack. His fastest lap was a 1’31.416s, set on lap 68/69, that earned him fourth place in the Day 3 rankings and fifth place in the combined results, 0.356s from the top.

The team will now return to Europe whilst the engineers in Japan process the testing data. The Monster Energy Yamaha MotoGP Team will regroup in Qatar from 4-6 March to kick off the 2022 season.

This test was very important. We had to start from zero because this is a completely new track. Overall, our findings are very positive. The track conditions got better day by day and that allowed our riders to be able to push their bikes closer to the limit and find areas of improvement. Over the last three days we have been able to evaluate all the testing material that we prepared during the winter break and first tried in Sepang. The progress made throughout the entire test is significant for us. Our mission is to improve the bike in all areas whilst maintaining the bike’s strong points. We are impressed with Fabio’s race pace and his time attack today. We're also pleased with Franco’s improved feeling with the bike. He was able to do a really nice lap at the end of the session. But with 21 riders covered by just one second, we can expect a very closely contested 2022 season. We will now analyse the data and make sure we are fully prepared for the first GP weekend in Qatar at the start of March.

I’m feeling good. We put in a lot of work and laps again. We had set out to improve our feeling with the soft and we did that: our pace with the soft was fast. I could feel myself being much better, the feeling with the bike improved a lot. I also did a long run with a medium rear tyre. The feeling wasn't as good as it was with the soft tyre, but I’m still really happy with what we managed to do today. I think we did a great job.

It was a good day. We improved day by day during this pre-season with Patrick, my new crew chief. At the end of this day, we also tried a time attack and it was good. The speed is getting there. I'm happy about this pre-season.