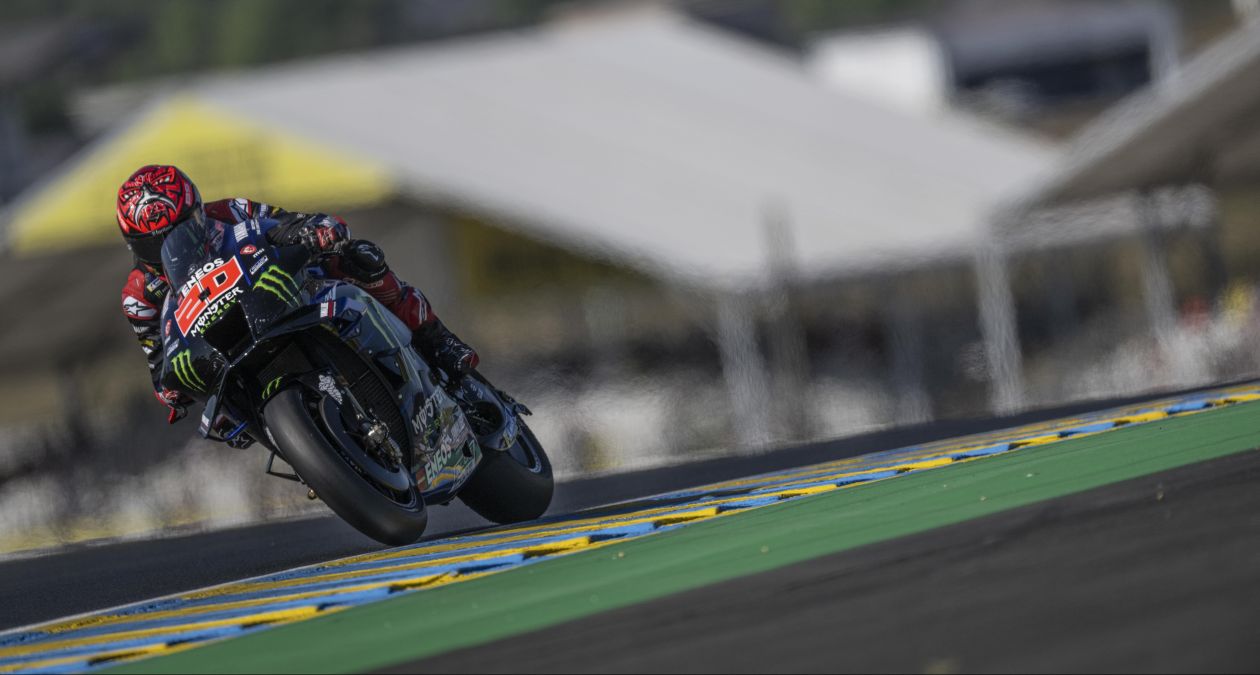 Monster Energy Yamaha MotoGP’s Fabio Quartararo and Franco Morbidelli were pushing hard already on the first day of the Grand Prix de France. The pair secured 6th and 12th place respectively in the combined free practice results.
Le Mans (France), 13th May 2022
Monster Energy Yamaha MotoGP's Fabio Quartararo and Franco Morbidelli started their Grand Prix de France campaigns at the Le Mans Bugatti Grand Prix race circuit today. The teammates used all the available track time of FP1 and FP2 to try their YZR-M1s' dry set-up options ahead of what is predicted to be a changeable weekend. They ended in 6th and 12th place respectively in the combined results.

Quartararo had an extra spring in his step this morning at the start of his home GP. For most of the sunny but somewhat chilly morning session he was featuring inside the top 5 whilst working on his bike’s race set-up. He set a 1’31.912s on lap 20/23 to finish FP1 in fourth place, 0.141s from the front.

The home hero was also in his element in FP2 and worked on fine-tuning his work from the morning. The usual mini time attack started with eight minutes left on the clock. He hit a lot of traffic during his final run, but remained firmly positioned inside the top 10. His best time of 1’31.640s, set on lap 6/21, put him in sixth place in the FP2 and the combined timesheets, 0.492s from the top.

Morbidelli didn’t have the start to the French GP he had hoped for. A crash in Turn 11 midway through FP1 lost him some track time. However, thankfully the Italian was quickly back on his feet and headed back to the garage. He improved his time to a 1’32.937s on lap 20/21, which put him in 20th place, 1.166s from first.

Morbido wanted to optimise his chances for a place in Q2 in the afternoon and made a big step. The number-21 rider spent most of the FP2 session tweaking his bike’s settings in order to challenge for a top-10 position in the final five minutes of the session. A late crash in Turn 10 meant he wasn’t able finish his last hot lap. He was again uninjured and ended FP2 in 11th place with a 1’32.025s, set on lap 19/19. The time earned him 12th position in the combined free practice rankings, 0.877s from P1.

This first day has been quite busy in a multitude of ways. The team put in hard work in the garage and also on track there was a lot of yellow flags and traffic, especially during the time attack. Having said that, it was a positive day for Fabio. He couldn’t get in a hot lap due to the circumstances, but his race pace is great. Franky unfortunately had two crashes today, but he was okay. Focusing on the positives, we can see that he is building up his confidence. We still have a lot of work to do for tomorrow, on the bikes but also on the tyres, to understand which one will work best. So far, we’re half way through our tyre work.

It was a good day because the pace was really good in both FP1 and FP2. We have good potential with the medium and the soft. I found quite a lot of traffic on track today, even during the time attack. I think I'm not the only one. I couldn't improve, but I feel like it was good for collecting some data for tomorrow. At the moment it's not clear yet who can be at the top, because everyone is so tight together here in Le Mans. It's going to be really interesting. I feel like we are going to have a really good weekend. It felt great riding in front of so many French fans. I feel happy, and they are enjoying themselves. This is the most important.

The conditions were a bit peculiar. There were a lot of crashes today. But speaking about myself, we've also today been working to improve my feeling. Actually, towards the end of the day we found a decent feeling so I could make a decent lap time and get closer to the best Yamaha, which is Fabio. So, good things today. We will try to step it up even more tomorrow. I'm feeling pretty confident.