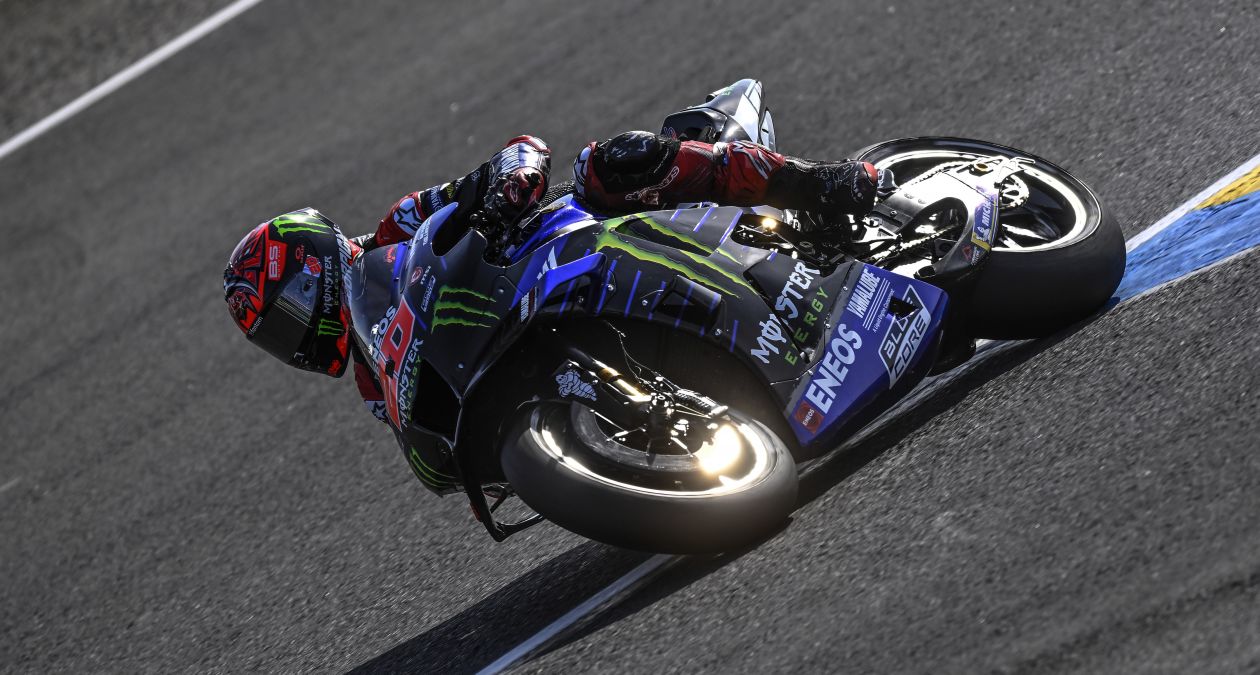 Quartararo to Make Bid for French GP Victory from P4

Monster Energy Yamaha MotoGP’s Fabio Quartararo had the fans cheering at the Le Mans Bugatti Grand Prix race circuit. He went all out in Q2 and secured a fourth-place starting position for the Grand Prix de France. A change to Franco Morbidelli's bike settings didn't work out for the Italian in Q1. He will start tomorrow’s race from P19 on the grid.
Le Mans (France), 14th May 2022
Monster Energy Yamaha MotoGP’s Fabio Quartararo had the assembled crowds at the Bugatti Grand Prix race circuit fully supporting him as he put on a show in Q2. He led the session for a good amount of time but ultimately will start the race from fourth position. Franco Morbidelli was unable to battle his way through Q1 and will line up for Round 7 of the MotoGP World Championship in P19.

The fans were cheering and whistling at Quartararo as he left pit lane to start his Q2 shoot-out. His first lap put him in second place, but he was just getting warmed up. On his next try, he set three red sectors and one orange sector to take over the number-one spot.

He headed straight back to the Factory Yamaha garage. His fastest lap only gave him an 0.011s advantage, so he knew he had to get back out there quickly to defend his provisional pole. With slightly less than six minutes left, he hopped to it. It was clear that he was on the limit on his second run trying to fend off the late chargers, but he didn’t manage to better the 1’30.688s he set on run one. His best time earned him fourth place, 0.238s from pole.

Morbidelli was fast to start the Q1 session, eager to use the 15 minutes to the fullest. His first hot lap put him in tenth place. He bettered his time on his next attempt, gaining a position, which he held as he returned to the pit box.

With six minutes on the clock, he started his second run. Holding 11th place at the time, the Italian dug deep and set a 1’31.617s on lap 7/9 that moved him up to eighth. However, unable to improve on his next two tries, he found himself in ninth place in the Q1 results and in P19 on the grid.

It’s fair to say that these were not the grid positions we were hoping for. Fabio gave it his all though during Q2. He pushed 100% and this fourth place was the best he could get today. The race pace he showed gives us a lot of confidence for tomorrow. It was a difficult qualifying day for Franky. Unfortunately, he has another race day ahead of him that will not be easy. We don’t have much work to do anymore for tomorrow, unless the weather will take a turn for the worse.

I was disappointed about this fourth place at first, but two minutes later I was happy because I realised that we have a good and consistent race pace. I am quite happy: a 1'30.6 with our bike is a good lap. I felt like I was on the limit, I had nothing more left to give. I expect a different race than in Jerez. The tyre temperature and pressure are different here. We know that 27 laps is long, and we will have the opportunity to attack. I feel confident, dry or wet. I'm hoping for dry weather. I feel I'm on the pace. We can fight for the victory.

Unfortunately, today we were greedy. We wanted to try a step from FP4 to qualifying that didn’t work. In qualifying I felt good. I made a step compared to this morning and yesterday, but I wanted more after FP4, and instead we went worse. We will start tomorrow from an FP4 base and try to make a better modification. Let’s see what the weather will be like and what happens.