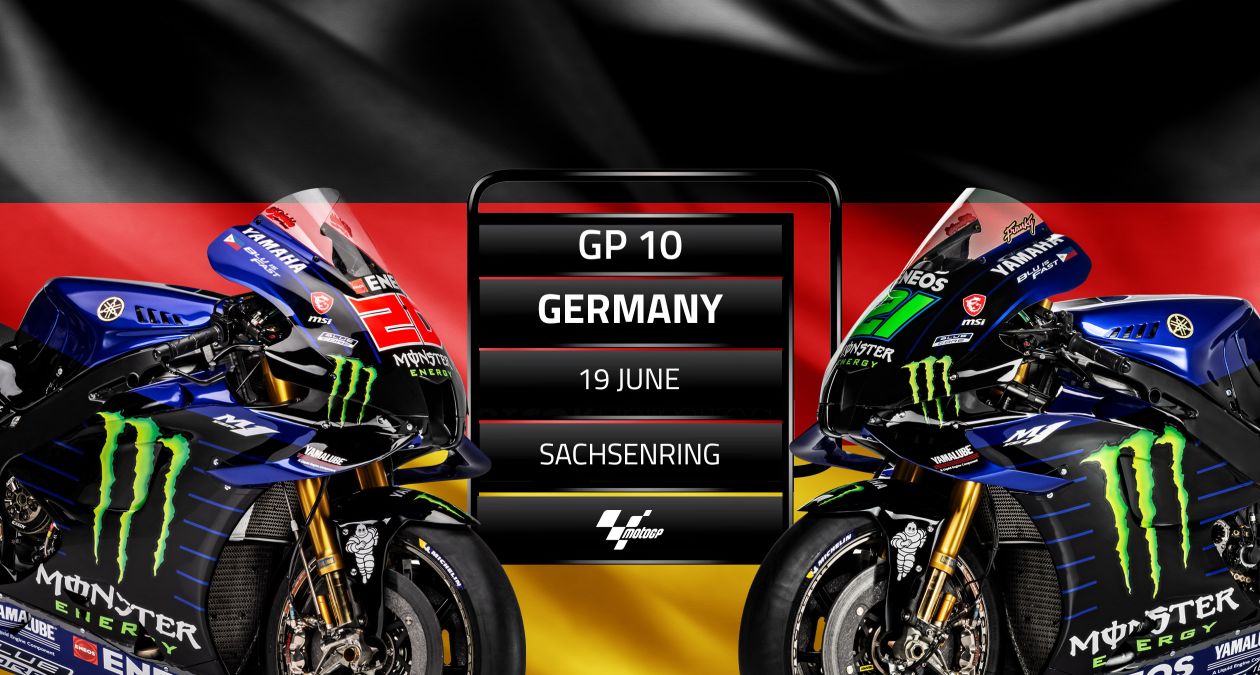 The Monster Energy Yamaha MotoGP Team is travelling to Germany for the Motorrad Grand Prix Deutschland, Round 10 of the 2022 MotoGP World Championship, held this weekend at the Sachsenring.
Chemnitz (Germany), 15 June 2022
Following a sensational Catalan GP and successful Catalan Test less than a fortnight ago, Monster Energy Yamaha MotoGP's Fabio Quartararo and Franco Morbidelli are looking forward to the Motorrad Grand Prix Deutschland weekend.

Quartararo arrives in Germany as the championship leader, with a 22-point advantage over his closest rival. Having shown a competitive pace in the previous double-header, he is feeling confident that he will be able to produce a strong result again this time round. El Diablo’s third place last year at the Sachsenring was his first podium placement on German soil, and he feels determined to go bigger this year.

Morbidelli aims to confirm his findings from the Barcelona track at the Sachsenring this weekend. The technical and twisty Sachsenring makes a good practising ground to evaluate his feeling with the bike. Having stood on the top of the German rostrum in the Moto2 class in 2017, he will use his experience at this track to collect valuable championship points in the upcoming race.

The area of Chemnitz is known for its love of car and motorcycle racing. Originally, races in the area were held on closed public roads from the 1920s onward. The Sachsenring was built in 1996 for safety reasons. Two years later, the track hosted its first MotoGP event. The just 12m wide circuit has numerous tight corners (ten left, three right), making this circuit one of the slower tracks on the calendar, but there will still be plenty of action at the German GP.

We now start the final push before the summer break. We have back-to-back races coming up in Germany and The Netherlands, and it’s vital to do well as this is an important part of the championship. Everyone wants to start their summer holidays without the worries of ‘coulda, woulda, shoulda’. We start with the Sachsenring, which has a unique character. It’s lay-out is not easy, but we have scored podiums here before, so that will be our aim again this weekend.

The last race was great. This last week I’ve just been enjoying the feeling you get after a win, but now it’s time to focus again for the race at the Sachsenring. This is a completely different kind of track than Montmeló. But I’m feeling top fit, and I’m riding really well, so of course we will be going for the best result possible again!

We got a lot of laps in during the Catalan Test. We’re improving little by little. The changes we made should help us at the Sachsenring. This is a particular circuit, in the sense that it’s narrow. It makes overtaking a bit tricky, so qualifying will be very important this weekend.
Michelin Racecard | German GP