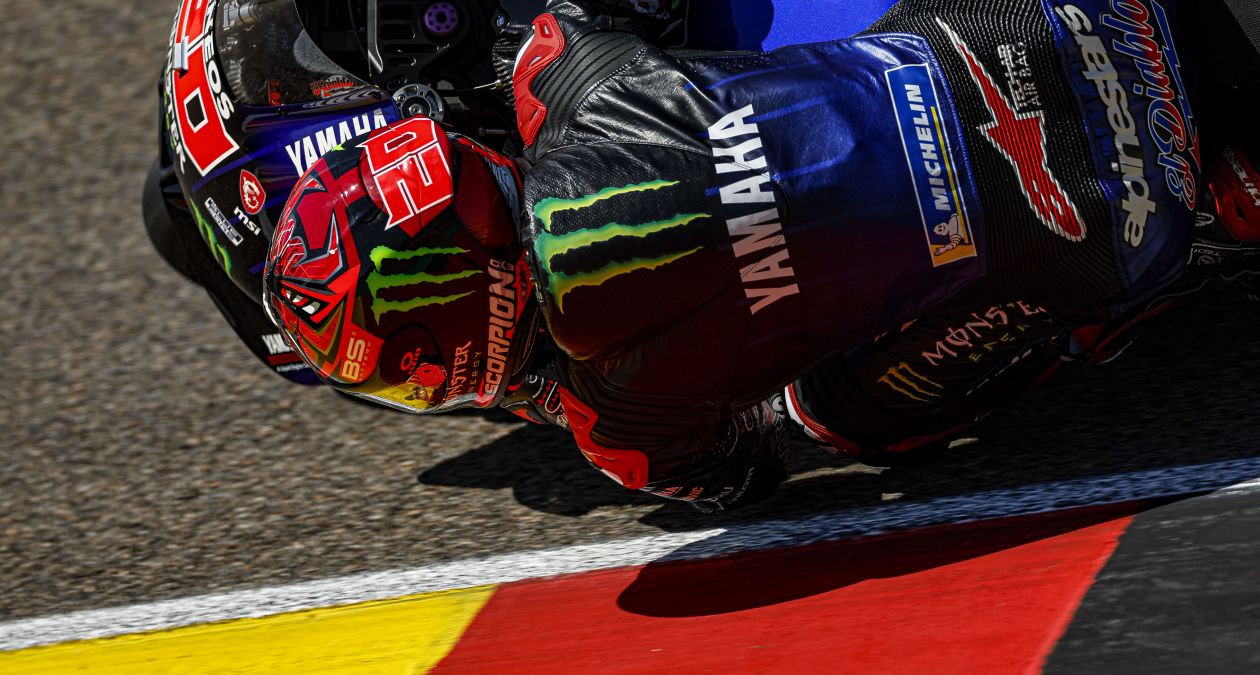 Monster Energy Yamaha MotoGP’s Fabio Quartararo and Franco Morbidelli started the Motorrad Grand Prix Deutschland with high motivation, but getting the hard-spec tyres to work at the Sachsenring proved challenging. They secured 7th and 15th place respectively. With the top-17 riders setting times within 0.897s of each other, the heat is on this weekend.
Sachsenring (Germany), 17th June 2022
The Monster Energy Yamaha MotoGP Team started Round 10 of the MotoGP World Championship at the Sachsenring looking for a solid base set-up suiting the twisty track and evaluating different tyre options. Fabio Quartararo and Franco Morbidelli secured 7th and 15th place respectively in the combined FP results.

Quartararo made steady progress in the morning session. He gradually found his pace on his first run and began to dip under the 1’22s-mark. He worked himself up to second place with a 1’21.557s on lap 11/25. He used his second run to improve his race set-up and ended FP1 in third place, 0.078s from first.

El Diablo used the hot afternoon session to find a good feeling on the hard-spec tyres, but he didn’t feel like he could ride on the limit yet. He improved his time to a 1’20.399s on lap 22/22 when he fitted a soft rear tyre and found more than a second compared to his morning result. He ended the first day in Saxony in seventh place, 0.381s off the fastest time.

Morbidelli was pleased to confirm some of his findings from the Catalan Test during the Friday session. He wrapped up his first run at the Sachsenring by setting a best morning time of 1’21.939s on lap 9/27. At the time it earned him a top-10 placement. He ultimately completed FP1 in 14th position, 0.460s from the top.

Like his teammate, the number-21 rider shifted to the hard tyres in the afternoon to establish if it was a good option for the race. He too found that the hard tyre wasn’t working as well for him compared to the medium option in the cooler morning session. Still, the Italian shaved off more than a second of his morning time. He clocked a 1’20.856s on lap 19/21, which left him 15th and 0.838s off the P1 time.

The FP1 session was better than FP2 for us. We used the medium tyres in the morning session when the temperatures were lower. The bike was behaving well, and the pace of both riders was good. In the hotter afternoon, we used the hard compound because we wanted to see if this spec is a good option for us for the race. So far, the hard spec didn’t give Fabio or Franky the feeling they were looking for in any area. We will investigate if there is something preventing this tyre from performing well for us, or if it’s simply too hard. Though we’re not satisfied with our afternoon performance, Fabio is still in the top 10. We will continue to work hard as we hope to make a significant step in FP3. The weather forecasts are good for tomorrow, this will give us all the time we need to improve.

I feel good, but we’re still missing some performance. I mean, our pace is not too bad, but in the first laps on a new hard tyre I was pretty slow compared to the others, and we need to find a solution to find that 0.4s-0.5s that we’re missing. When I go out on a new hard tyre, it feels like a used tyre, so that’s something we need to improve. The feeling is kind of similar to Barcelona. Let’s see who will and who won’t improve when the temperatures go up further later this weekend. I don’t think it will be a big issue for us.

So, there are some things to improve with the race tyres, but the feeling and the pace weren't bad at all. For sure, to get to the top guys’ pace we need at least 0.3s-0.4s. But the biggest problem is that I can't improve on a new tyre like others can. Others seem to be able to improve by 1s. I'm not on that level. We are working on understanding the new tyres better to improve on them like we should.