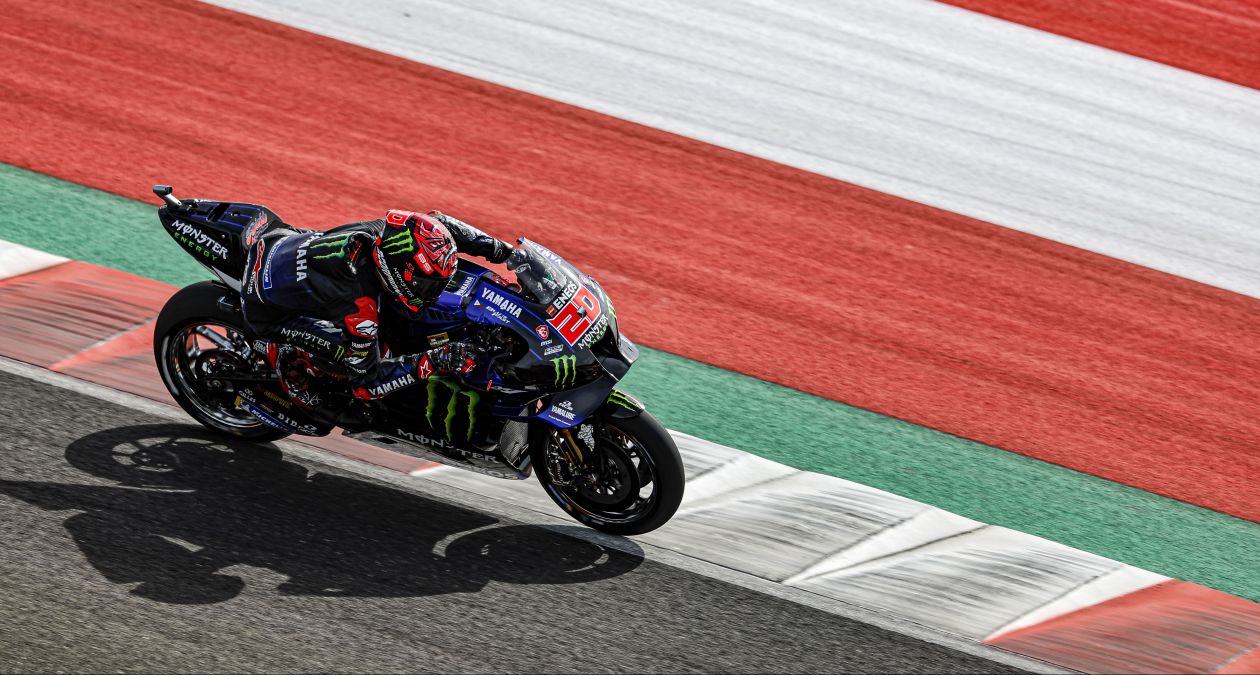 The Monster Energy Yamaha MotoGP Team got the first ever MotoGP race weekend at the Mandalika track underway today. Fabio Quartararo and Franco Morbidelli were in a league of their own by the end of Day 1 of the Grand Prix of Indonesia, taking first and second place respectively in the Friday combined free practice standings.
Mandalika (Indonesia), 18th March 2022
Monster Energy Yamaha MotoGP’s Fabio Quartararo and Franco Morbidelli returned to the Mandalika track for the Grand Prix of Indonesia. The duo refamiliarized themselves with the track in the morning session to get into the mix for top billing in the afternoon, securing first and second place respectively in the combined free practice results.

Quartararo made the most of the drying track conditions to tweak his bike’s Mandalika Test settings in his search to find more grip at the still dirty track. Testing a hard-medium tyre combination, the Frenchman clocked a best lap of 1’34.793s on lap 19/21 that put him in 16th place, 1.294s from the top.

With the afternoon session perfectly sunny, El Diablo had hoped to make further strides, but a small issue early on lost him time. The slight misfortune only spurred the Frenchman on, however. By the halfway stage, he was already inside the top 4, a position which he later improved with a 1’32.570s for provisional first. The time attacks started with five minutes remaining. Quartararo responded by posting a 1’31.608s on lap 16/18. The time was fast enough to earn him first place in the FP2 and the combined free practice results, with a 0.030s advantage over his teammate in second place.

Morbidelli had enjoyed making solid testing progress at the Mandalika track at the start of the year, and it was clear from the get-go that he meant business again in Indonesia this weekend. He set a fast pace, spending most of the session steadily inside the provisional top 10 before fitting some soft tyres to produce a 1’33.881s for a short-lived P1. That time, set on lap 16/19, was quick enough to finish FP1 in fourth position, 0.382s from first.

Confident after the productive morning session, the Italian fully focused on making progress with his bike’s performance on the dry during FP2. He tried various settings and the medium tyre option in preparation for a dry race on Sunday. He put his findings to the test in the final stages during a second time attack and clocked a 1’31.683s on lap 17/18, which was only beaten by his teammate. He secured second place in the FP2 results and combined FP timesheets, with a 0.255s gap to the rider in third place.

It was a productive first day for us at the Mandalika track. The two key elements to this round are the track’s new asphalt improving day by day and the extremely hot weather conditions. Fabio did a really good job turning a difficult day into a good result. He was struggling to find a good feeling in the morning, and a little issue at the start of FP2 cost him further time, but he showed great maturity, and he and his crew got the job done. Franco’s hard work today is bearing fruit. He and his crew are working in the right direction. He seems to come to terms with the Mandalika track more and more each time he heads out, and his lap times reflect that. A 1-2 is a very encouraging start to the race weekend, but it's early days. We will make sure to remain focused because the conditions can change here in the blink of an eye. Today we've already been able to compare different tyre compounds. That gave us useful information about which tyres we will most likely choose for the race, but we will do some further experimenting tomorrow.

Basically, I was not there this morning, because Franco was within the top 5, so it was my fault. I tried my best on the hard tyre in the morning, but it was not working for us. Tomorrow, we will try it again in hotter conditions, but it was not easy. In the afternoon, I felt much better in much better conditions. I had a small issue, but then at the end I adapted quite quickly, and I managed to get in a great lap. This is the first time this year that I finished a practice feeling really confident. In the test here I also felt confident, I felt fast, and I think today's result is a good way to bounce back from what happened in Qatar, which was disappointing. Even if it's just a free practice, it's good to have a taste of being in a better position and being faster.

Many things were different compared to the test: the tyres, the tarmac. So, it was really difficult to change things on the bike, because many key elements had changed this Friday. So, today we just tried to adapt to the new situation, and we did quite well, because we were decently fast, and finally also on new tyres Fabio and I were fast. Overall, a positive day for us I would say. I feel good. I was feeling good in Qatar too, but it’s still early and it’s difficult to make predictions this early on.