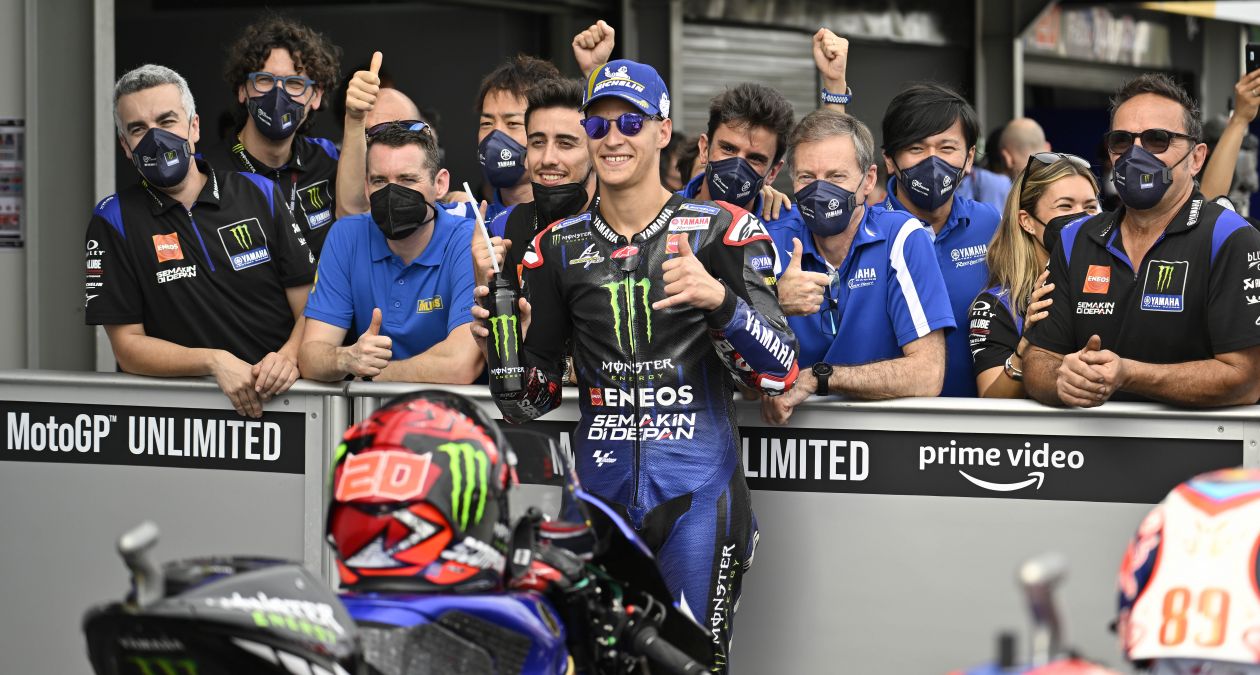 Monster Energy Yamaha MotoGP’s Fabio Quartararo was in a league of his own in today’s Q2 session, setting a new All Time Lap Record of 1’31.067s to take his first pole position of the 2022 MotoGP season. Franco Morbidelli went into Q2 as one of the favourites, having shown great pace all weekend, but he was unlucky to get caught out by a damp patch in Turn 5. The incident lost him crucial time and ultimately led to him ending the session in 12th place.
Mandalika (Indonesia), 19th March 2022
Monster Energy Yamaha MotoGP’s Fabio Quartararo dominated today’s Q2 session and secured the 16th pole position of his MotoGP career at the Grand Prix of Indonesia. Franco Morbidelli would have been in the mix for a front-row start but was unlucky to crash out on his second hot lap. He was able to head back out on his second bike but paid a steep price for the small mistake, finishing the session in 12th place.

Quartararo let most of his rivals exit pit lane ahead of him as he commenced the 15-minute Q2 heat. He set a 1’31.227s on his first flying lap to take provisional first place. Unable to improve on his next attempt, he entered pit lane with nine minutes on the clock.

Three minutes later El Diablo was ready to defend his P1 position. He set four red sectors for a 1’31.067s, a new All Time Lap Record. He had two more goes but was unable to make further strides. Nevertheless, no other rider could match his level. The Frenchman secured his first pole of the 2022 season by 0.213s.

Morbidelli showed great pace all weekend and was determined to also let his one-lap speed shine in the Q2 session. He set a 1’34.075s on his first try and was ready to push but then suffered a high-speed crash in Turn 5 due to a wet patch. The Italian was unhurt but couldn’t re-enter the track and had to hurry to the garage to collect his second bike.

With six minutes on the clock, he started his second run, holding 12th place. He gradually upped his speed posting a 1’32.978s, an improvement on his time but not his placement. He was on for a personal best lap, but a yellow-flag situation denied him the opportunity to move up the order. Bettering his time on his last try to a 1’32.336s, he finished the session in 12th place, 1.269s from first. The Yamaha-man will be starting the race from P15, however, after receiving a three-place grid penalty from the FIM MotoGP Stewards Panel for not adhering to the correct practice start procedure following FP3.

It’s a mixed day for our team. We are, of course, incredibly pleased with today’s pole position – especially because of the manner in which Fabio got the job done. He was in control of the Q2 session, holding P1 all the way, and he seemed to enjoy the qualifying like he did for most of the 2021 season. That’s great! He also showed really good race pace in today's practice sessions, so the preparations for the race are almost done. On the other hand, we are very disappointed for Franky, who’s in great shape this weekend and showing lots of potential. It was unlucky that he crashed due to a wet patch in Turn 5. It was a small mistake, but he paid a very high price. We would have liked to see him fight for pole and the front row too, because he had the speed, but today that wasn’t to be. To make matters worse, the FIM MotoGP Stewards Panel imposed a grid penalty of three positions on Franky because of a small mistake he made during the practice start session. It will be a tough race for him, but anything is still possible.

Of course with the new asphalt and new tyres you don’t know what to expect for qualifying, but I was feeling super great during the Mandalika test and also now. I’m even more happy about my FP4 session when I did a lot of 1’32s laps in a row. That, I think, was great and a good test to evaluate my physical condition. Doing 15-16 laps in a row is good. When I have tough moments, I want to turn things around. I think today and also yesterday we worked in a proper way. We took a risk by changing something on the bike that has been really paying off here, let’s see if it will also work on the other tracks. I think that it's really great that we were fighting for pole position and the front row, and that we achieved it. It’s been a while since the 2021 Emilia Romagna GP that I felt this confident during qualifying, and it’s great to have this feeling back. I will try to hone it until November.

It was not our day today. I made a mistake on a wet patch in the first time attack and then in the second time attack I took it too easy, and I couldn’t improve my lap time. That’s unfortunate. But we are confident because we have a good pace. This is true. We will try to refine some more things for tomorrow, and we’ll try to make a good race. We start from far behind, we all know that it’s going to be difficult, but we’ll try anyway. We have a good speed, so who knows? About the penalty, it is right. It was my fault. I made a mistake and I’m sorry. I won’t do it again.