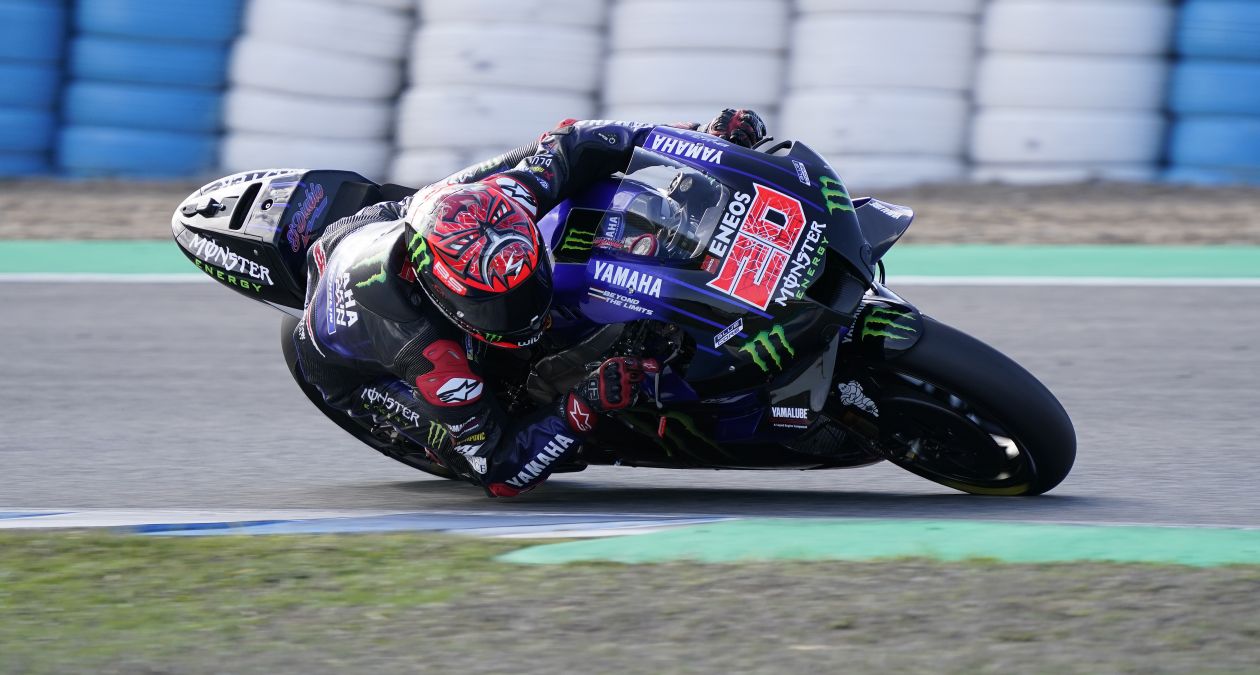 Pictures for editorial use only
Copyrights 2021 Yamaha Motor Racing Srl

Quartararo showed his exceptional work ethic by putting in 68 laps on the last day of riding his YZR-M1 in 2021. The current World Champion has his mind already firmly set on next year's title quest and spent Day 2 working diligently on gathering data with the 2022 spec bike. He set a personal best time of 1'37.324s on his penultimate try and ended the session in second place, 0.452s from first. The result puts him in third position in the combined timesheets.

Morbidelli struggled on the second day, as the windy conditions made riding even more challenging with his knee injury. However, the Italian soldiered on, riding 30 laps in total. Without putting in a time-attack, he set a 1'38.100s on lap five that kept him in 15th position in the Day 2 rankings, 1.228s from today's best time. However, his 1’37.884s lap from Day 1 earned him 12th place in the Jerez Test results overall, 1.012s from the top.

The Yamaha engineers will thoroughly go over all the test data in order for the Monster Energy Yamaha MotoGP Team to make another step after the winter break.

We have started the new ‘racing year’ in a positive manner overall. Both riders tried the 2022 prototype bike again here in Jerez after they gave it a first try at the Misano Test earlier this year. We finished the Jerez testing plan succesfully: trying two different chassis, a new aerobody, and a different rear arm. We gathered all the information we needed and feel pretty confident. The data we collected will be used by our Yamaha engineers over the winter break to shape what will be close to the final 2022 bike that we will be testing in Malaysia and Indonesia at the start of next year. But first we'll all have a well-deserved holiday after a very rewarding year.

Here in Jerez, we tested a first step of the 2022 bike, but it’s just the first step. Yamaha knows what to do to improve a lot. We will be 100% focused on what we have to do for next year. I still have some events. I won’t really have much time off until December. After that I will enjoy my time off.

It was a tricky second day because of the wind. I couldn’t ride properly because of that. I already struggle to ride in normal situations, and with the wind I struggled even more. So we didn’t do many laps, but anyway we completed the programme. We tried everything we needed to try. Rehab is going to be my main job this winter. I’m going to try to regain the full motion of the knee, so let’s see if I manage to do it.