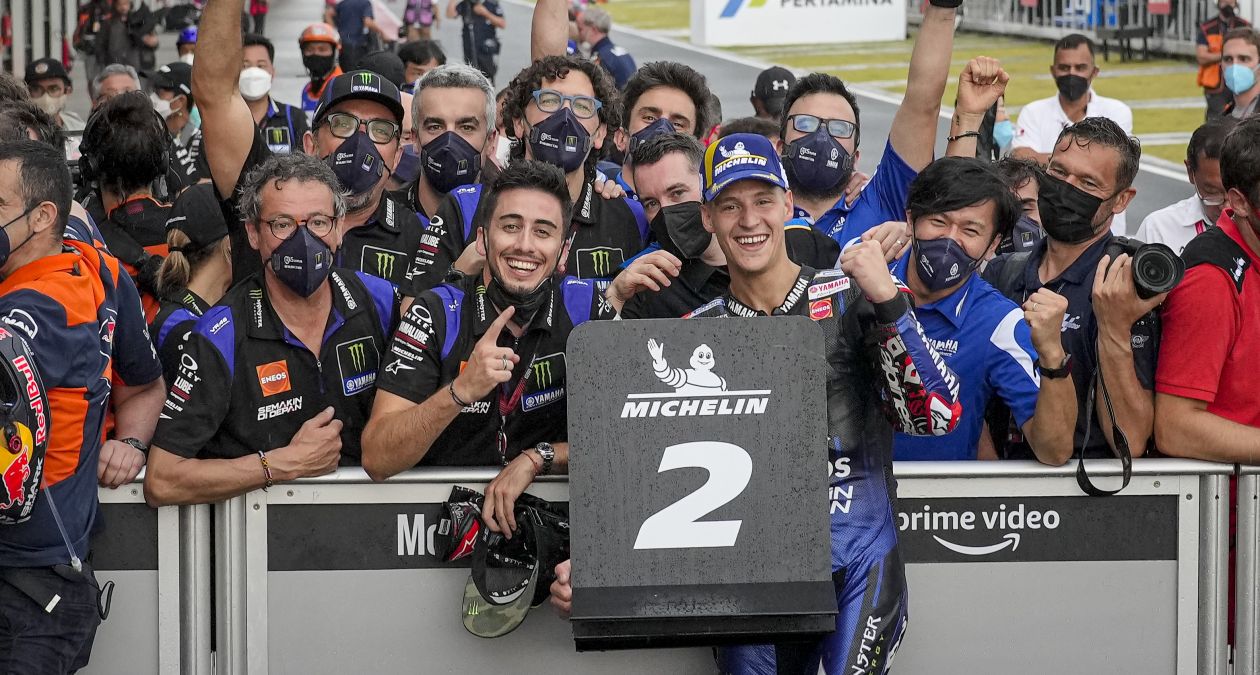 Fabio Quartararo and Franco Morbidelli’s nerves were tested at the start of today’s Grand Prix of Indonesia. A heavy thunderstorm delayed the start of the race to 16:15 local time, but once it got underway both Monster Energy Yamaha MotoGP riders showed great skills. Quartararo fought bravely for second place, whilst Morbidelli’s perfect start gained him seven positions and ultimately earned him seventh place.
Mandalika (Indonesia), 20th March 2022
Monster Energy Yamaha MotoGP’s Fabio Quartararo and Franco Morbidelli showed some great adaptive riding during today’s soaking wet Grand Prix of Indonesia. Quartararo surprised even himself with his strong pace and secured a valuable 2nd place. Morbidelli did himself proud, making all the right moves at the start and on the opening lap. He recovered from 14th on the grid to 7th place across the finish line.

The passionate Indonesian fans waited patiently as the MotoGP race was delayed by 1h15m due to torrential rain. It was shortened to 20 laps, but turned out to be a spectacular show nonetheless.

It started tensely though. The nerves were running wild on the starting grid as the riders had never ridden at the resurfaced Mandalika Track in fully wet conditions before. Quartararo had the perfect start from pole and took the holeshot. As the race leader, he became the ‘guinea pig’ testing the track conditions. He had to find a balance between speed and caution and was overtaken by Miguel Oliveira and Jack Miller at the end of the opening lap.

The Frenchman initially struggled to adapt to the treacherous wet conditions and lost a few positions, eventually settling in fifth place. But every lap he was gaining confidence to push more. Once he overtook Alex Rins on lap 13 for fourth place, it was his cue to put his head down, having a podium finish in his sights. With six laps to go, he started a friendly battle with compatriot Johann Zarco for podium. One lap later he smoothly passed Jack Miller and was in second place. He then put in a brave bid to reel in race leader Oliveira, but ultimately finished in second place, 2.205s from first.

Following the Qatar GP, Morbidelli had made the resolution to be more aggressive and make smarter choices at the start. He fully succeeded today at the Indonesian GP. He had a belter of a start that fully made up for the thee-place grid penalty he was given on Saturday that had him start from P14 (moving up one position due to Marc Marquez being declared unfit to race). Only a couple of corners into the 20-lap race, he was already in seventh place. The brilliant opening moves were key to his race result.

The Italian briefly lost a place to Jorge Martin, who later crashed. The Yamaha-man rode a steady second half of the race and came under no further threat. He was able to fully focus on his own riding in the wet conditions on the factory Yamaha and brought the YZR-M1 home in seventh position, 21.115s from the top.

Today’s results put Quartararo and Franco Morbidelli in 3rd and 7th place in the championship standings, with 27 and 14 points respectively. After Round 2, Yamaha and the Monster Energy Yamaha MotoGP team are in 3rd place with 27 points in the Constructor championship and 2nd position with a 41 points total in the Team championship.

Monster Energy Yamaha MotoGP will be back in action at the Autódromo Termas de Río Hondo from April 1-3 for the Grand Prix of Argentina.

Fabio had a superb ride! At a certain point it looked like he was riding on the dry. I couldn’t even have imagined this at the beginning of the race. Usually we suffer a bit in these conditions but here the bike was competitive, and today if Fabio had believed a bit more in first laps he could have even done even better. This second place is a fantastic result and it tastes all the sweeter after the Qatar GP. Franky had a fantastic start and that was really the key to his race. He made up seven positions in just the first sector of the first lap and then defended the position the best he could. I have to say that the outcome of this race was unexpected, but we are very happy. We want to thank the Indonesian fans for being so supportive and enthusiastic. We hope they found this first race at the Mandalika Circuit worth the wait!

I didn’t expect this! Already from the warm-up lap it felt like we had something extra compared to normal, because we know that we always struggle in wet conditions. When it’s full wet and there’s grip, I know my potential. But today I did better than I expected! I saw an opportunity and went for it. These are super important points. I think this is my first podium in the full wet, so I’m super happy. ‘Thanks’ to the fans who waited for a long time because of the delay of the GP. I’m super happy that we found something in the wet. I enjoyed this so much, so thanks everyone.

It was a crazy race! The visibility was zero. You could only see red dots in a white cloud. So it was crazy, but sometimes you're just feeling it, and today I did. After a bad Saturday, we were able to bounce back on Sunday. We did a good start and especially a good first lap of the race. After that I suffered a little bit. We don't have too much experience with the new crew and the new bike, so we need to catch up and adapt as quickly as possible. We will try to do it in Argentina.