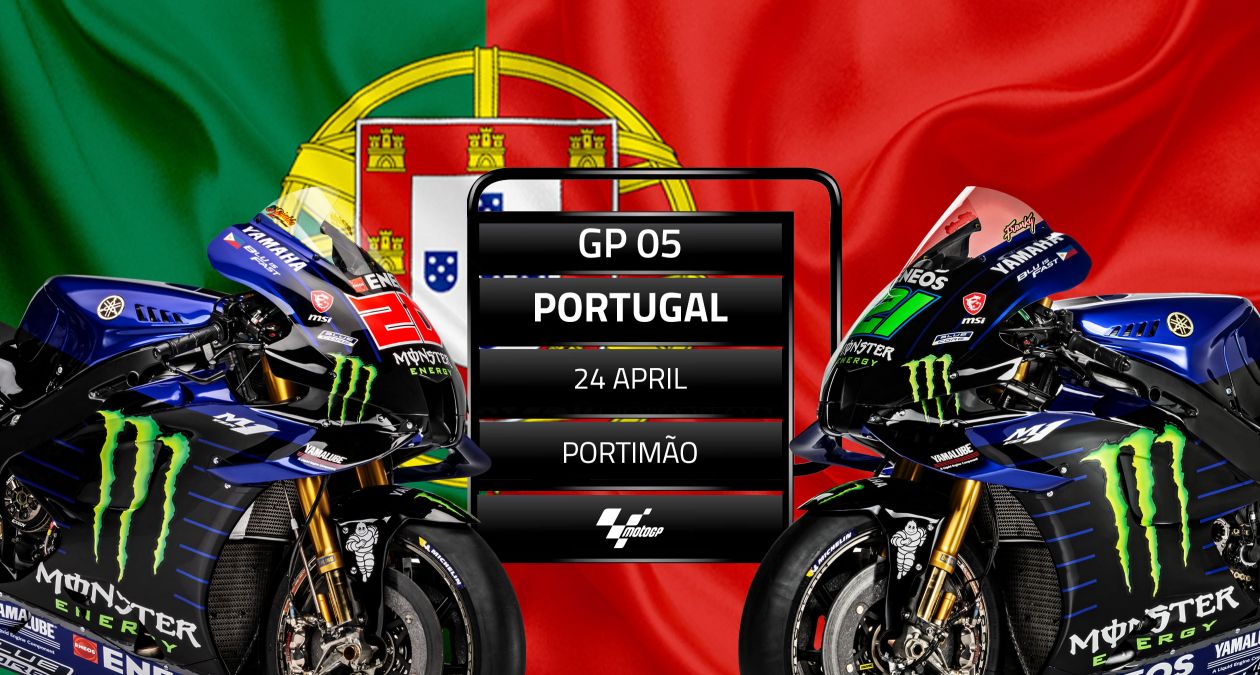 Monster Energy Yamaha MotoGP's Fabio Quartararo and Franco Morbidelli have travelled to Portimão, Portugal, for the first European round of the 2022 MotoGP season, held at the Autódromo Internacional do Algarve this weekend.
Portimão (Portugal), 20th April 2022
The Monster Energy Yamaha MotoGP Team are back in Europe and ready for the next round at the Autódromo Internacional do Algarve in Portugal.

After two difficult races overseas, Fabio Quartararo (who celebrates his 23rd birthday today) is eagerly looking forward to the next round in Portimão, a track that he believes suits his Yamaha better, as shown when he dominated during Round 3 last year.

El Diablo intends to continue fighting for the championship. He is currently in fifth place in the overall standings, with a 17-point deficit to first. He aims to hit the ground running at the Portuguese GP on Friday, secure a front row on Saturday, and be battling for the podium on Sunday.

Franco Morbidelli is keen to return to the Autódromo Internacional do Algarve. The Italian is currently 15th in the overall results and determined to climb the rankings at a track he does well at in general.

Morbido has taken a liking to the the Algarve circuit since it was added to the MotoGP calendar in 2020. He secured third place there that year and followed it up with fourth place at the Portuguese GP in April the next year. As he wasn’t fully fit for the Algarve GP, also held at Portimão towards the end of the 2021 season, he is keen to show his true potential there again this time round.

The Autódromo Internacional do Algarve – better known as Portimão (after the port city from which it is half an hour’s ride removed – is situated in the Algarve region of Portugal. The circuit was opened in 2008 and is a big hit with the riders but also especially with the fans, who can't get enough of their heroes taking on this track that is famous for its elevation changes. The circuit has 15 corners – nine right, six left – and the front straight will allow the MotoGP riders to really stretch the legs of their machines before a unique downhill descent into Turn 1.

After two disappointing races, we have regrouped. There’s work to be done, so that’s what we’ll focus on in order to fight for podiums on European soil. Portimão is a good track for both Fabio and Franky. Fabio had that brilliant win here last year at the Portuguese GP, and Franky stood on the podium here in 2020 before his injury. We want to get the best results possible, and we are feeling fairly positive that it can be done as long as we secure good starting positions.

I enjoyed the race in Austin because I did my best. There were some nice battles on track, and I learned a lot. I was satisfied with my performance, but in Portimão I want to fight for the podium. When we came here in April last year, I won. That race was really amazing, and I want to ride like that again. The goal is always to be first and do our best, so that’s what we will continue to do.

The Austin GP was a weekend to forget for us, so we move on to Portimão, which is a track I like, but it is quite challenging. It’s a physically demanding circuit because of the elevation changes. Last year during the Algarve GP, the rollercoaster nature of this track aggravated my knee injury, but that won’t be a problem this time. I should be able to ride like I did during the 2020 and 2021 Portuguese GP when I was third and fourth, so I’m looking forward to it.