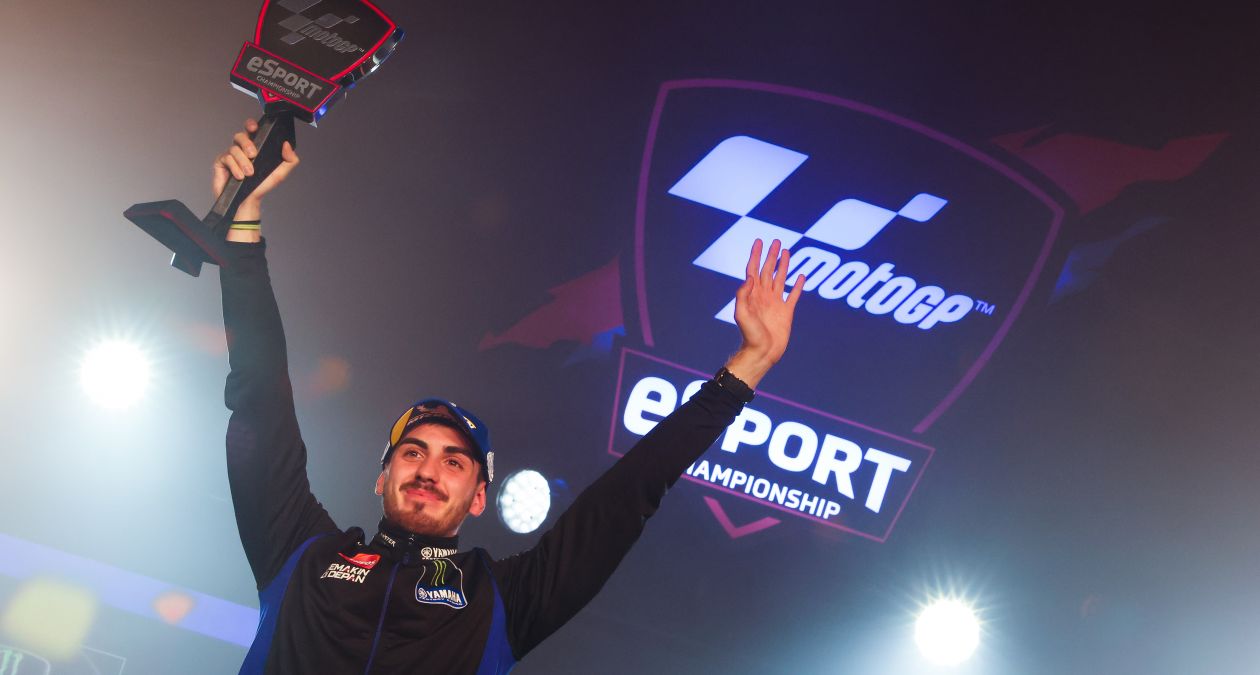 Monster Energy Yamaha MotoGP are delighted to announce the continuation of their partnership with triple MotoGP eSport World Champion Lorenzo Daretti. He will again be the official Yamaha Factory e-Rider in 2022.
Gerno di Lesmo (Italy), 23rd May 2022

The 2022 MotoGP eSport Championship is set to kick off on 27th May with the first round of the Global Series. The Monster Energy Yamaha MotoGP Team are delighted to take this opportunity to announce the renewal of their contract with triple and current MotoGP eSport World Champion Lorenzo Daretti, also known by his gamer tag Trastevere73 or Trast73.

Daretti has been Monster Energy Yamaha MotoGP’s e-Rider of choice since 2019. The triple MotoGP eSport Champion is a consistent protagonist and is seen as the man to beat. He finished Vice Champion in 2019 and 2020, narrowly missing out on the win both times, but he got back on the top step in 2021 with a brilliant performance in the live broadcast at the last round in Valencia.

Besides cheering Daretti on in the MotoGP eSport Championship, fans can look forward to seeing him in action at various promotional activities. Being a biker himself, he will also participate in various Yamaha events on track and on the road.

For those who wish to get to know the three-time MotoGP eSport World Champion better can watch his latest interview.

We are very happy that Lorenzo will again be our rider. Last year’s MotoGP eSports World Championship win is still very fresh in our memory. It was a great achievement by Lorenzo to be consistently in the top 2 for five consecutive years in such a competitive, evolving, and changing environment. That takes real talent as well as dedication. We have come to know Lorenzo as a true professional with a real passion for both eSports and bikes in general. We look forward to watching him in action again in the 2022 MotoGP eSports Global Series and welcoming him in our team’s hospitality at the track and at other Yamaha activities, such as the Yamaha VR46 Master Camp training event.

I'm so pleased to compete with the Monster Energy Yamaha Team again in 2022. The team is like my home now. We’ve been together since 2019 and still grow together as the MotoGP eSport sector gets bigger and bigger. Securing the title last year was fantastic, and it’s the best way for me to say ‘Thank you’ to the team, who believed in me from the very beginning. Of course I will give it my all again this season. It’s shaping up to be an interesting championship: there are some new tracks on the calendar and also tracks that we haven’t ridden during the World Series challenges before. It will be a nice challenge – we are ready for it!