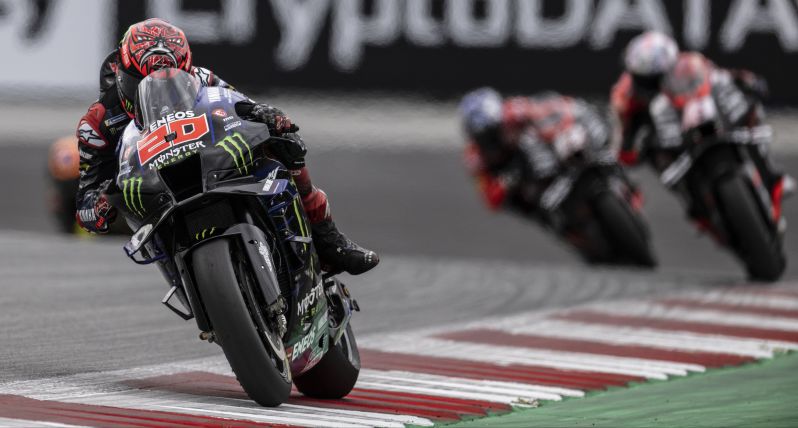 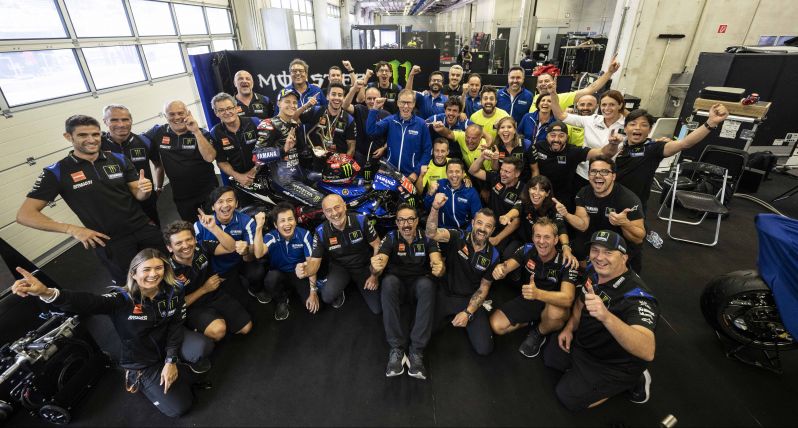 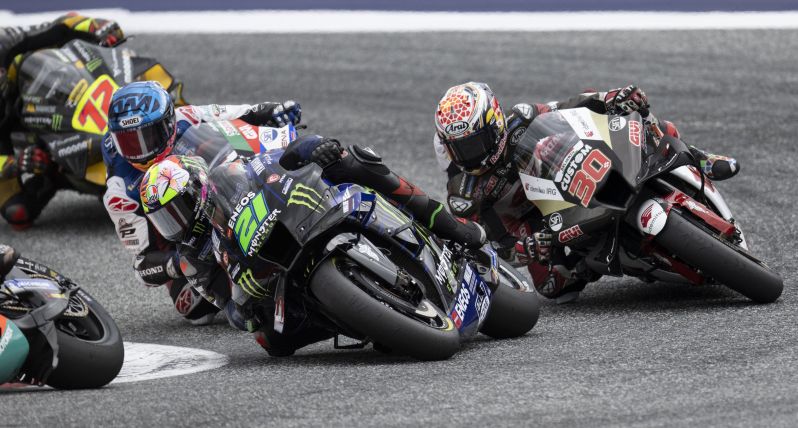 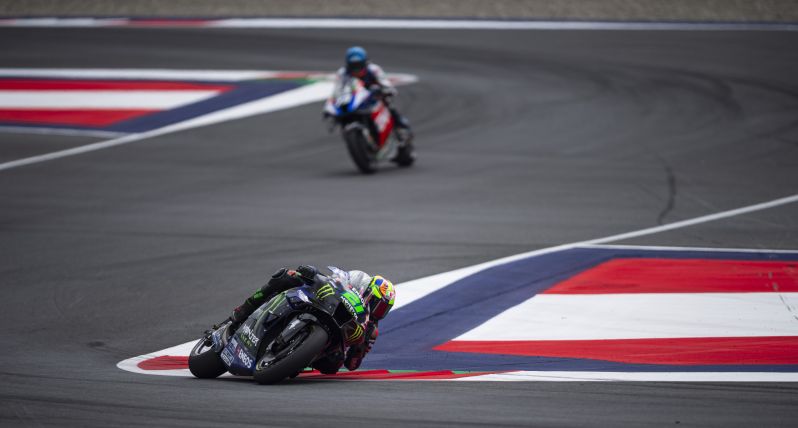 The combination of Fabio Quartararo’s extraordinary talent and the reliability of the YZR-M1 proved perfect in today’s Motorrad Grand Prix von Österreich. The Frenchman was on another level, putting in an incredible performance riding his Monster Energy Yamaha to a superb second-place podium finish. Franco Morbidelli enjoyed a positive race, being able to carry a solid race pace and putting in various overtaking maneuvers. However, his race ended prematurely with a crash in Turn 2, three laps before the end.
Spielberg (Austria), 21st August 2022
Monster Energy Yamaha MotoGP’s Fabio Quartararo gave an outstanding performance in today’s Motorrad Grand Prix von Österreich. The reigning World Champion squeezed every drop of performance out of his Yamaha YZR-M1 and rode to a hard-fought second place. Franco Morbidelli was carrying a competitive pace today and was on his way to achieve his goal of scoring championship points when a crash in Turn 2 ended his race prematurely.

Quartararo held his fifth position through the opening corners and opening lap but needed a bit of time of time to get up to speed and lost a position to Maverick Viñales on lap 2. However, once the Frenchman got into the zone just a few laps later, he turned on the pressure, and the Aprilia man ran wide, allowing the number-20 rider through.

With Enea Bastianini retiring due to a technical problem, El Diablo found himself in fourth place. It was a lonely ride for the current World Champion, but no less impressive as he was on the limit on every single lap. It paid off. Riding with the hard front tyre option rather than the soft like the leading three riders ahead of him, he started to be the faster man on track and reeled them in little by little.

With 12 laps to go Jorge Martin ran wide, allowing the Yamaha man through. Seven laps later, Quartararo had caught up with Jack Miller. He set up a perfect move out of the chicane one lap on, cunningly using the nimbleness of his M1 to overtake the Australian. He was in second place and rapidly closing in on the race leader. In the end he came just 0.492s short and took the chequered flag in second place.

Starting from P16, Morbidelli had to navigate the busy mid-pack in the opening corners that had various riders run wide. He temporarily fell back to 18th place but immediately started to make up lost ground. By the end of the opening lap, he was back in 16th place.

The Italian showed confidence on the bike and fighting spirit. He engaged in battles and had put his mind to getting as many championship points as possible. He got up to 14th place in lap 12. He and Miguel Oliveira in front of him then started to catch up with the two riders ahead. Morbido tried to overtake Oliveira on lap 24, but ran wide. He was hoping to have another go, but a crash in Turn 2 ended his race with four laps to go.

Today’s results see Quartararo’s lead in the championship standings increase to 28 points, with a 200 points total, while Morbidelli stays in 19th with 26 points. After Round 13, Yamaha remain second with 200 points in the Constructor championship, and Monster Energy Yamaha MotoGP keep third in the Team championship with 226 points.

The team will be back in action on 2-4 Sept for Round 14 of the 2022 Moto2 World Championship, held at the Misano World Circuit Marco Simoncelli.

Fabio’s race was incredible! It is well deserved because his riding is just on another level than anybody else’s in this championship at the moment. He is making the most of our package and putting in overtaking maneuvers that others hadn’t even considered but suit our strengths, like the one in the chicane when he took second place. He rode fast, consistent, and smart. It’s a shame that we came just a bit short here, because in our biased opinion, Fabio was the strongest rider on track today. But anyway, leaving this track with an increased championship lead is like a victory to us. Franky’s race can be looked at in two ways. Of course, we are disappointed for him to not be able to score some points after a decent race from P16. But on the other hand, we rather see a rider push hard and make an occasional mistake than finish every race without pushing. Today, he had solid pace and was able to overtake, so we will take that as a positive with us to Misano in two weeks’ time.

It’s a shame that I didn’t do a good first lap. But, anyway, I feel that we got the best result possible for us today. We were missing a little bit for the win, but I’m super happy about my race. I feel like we fought off our main competitors all weekend, and especially in the race I fought like a lion. I was on 100% risk today over 28 laps. But I was super focused. I made a few mistakes and lost the front so many times, but my reaction time and concentration were really good today. I feel proud of myself! And even with Pecco finishing in front of us, this has given me a boost of energy for the next races.

It was an unfortunate crash. I was catching up, I was feeling good. I was aiming to arrive at the two rivals ahead of me and Miguel. We caught up with them during the race. My pace was really decent. But unfortunately, when I overtook Miguel, I went outside the track in Turn 6, and then I made Turn 7 with a really wide line. When I arrived at the next left corner, my tyre was probably a bit dirty or something, because as soon as I turned the bike left, the front just washed out from under me. It's a pity, but we made positive progress this weekend - definitely. I was able to extract better potential from the bike and be faster generally. That's positive. We got to keep going like that. We'll see in Misano if we can replicate that good feeling or maybe make it even a bit better.