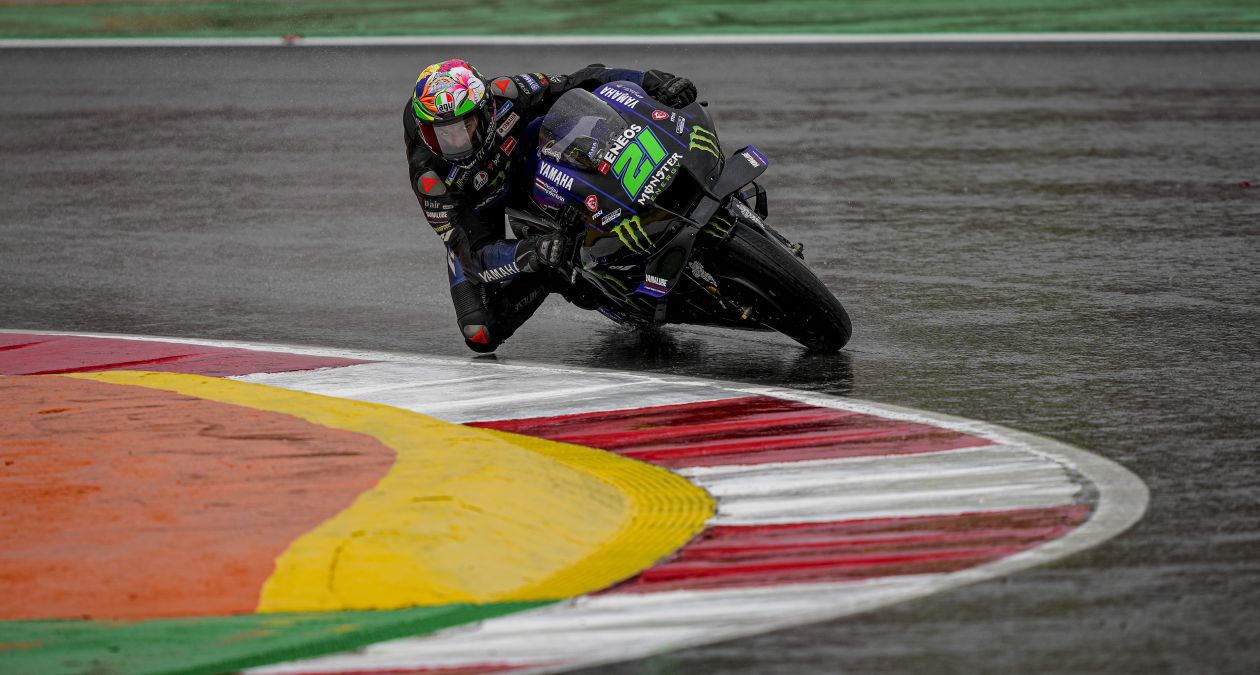 Morbidelli had been looking forward to riding at the Algarve track, but the damp conditions in FP1 proved to be a challenge. He focused on adjusting his bike to the wet rollercoaster track and ultimately finished the session in 19th place with a 1’52.072s, set on lap 8/19, 1.406s off the best time.

The number-21 rider made the most of the short bit of dry track time at the start of FP2. He went straight to action to get a fast lap in. A 1’51.911s put him in provisional sixth place and made him one of the few riders to make a time improvement compared to this morning. With 30 minutes on the clock, the rain started hammering down again. Morbido finished the afternoon session in seventh place in the FP2 results, 1.204s from the top. It put him in P18 in the combined results, 1.245s from first.

Quartararo knew that it was going to be two difficult sessions when he saw the 100% rain weather forecast for the Friday. He got straight to work in the 45-minute morning session. His best lap, a 1’52.061s, put him in 18th place.

El Diablo was determined to close the gap in FP2. Early on in session, he set a 1’52.534s on a drying circuit for 13th place, 1.827s from the top. He then used the remainder of the track time to improve his bike’s wet set-up as it poured down with rain. His faster morning time put him in P20 in the combined results, with a 1.395s gap to the front runners.

Today’s conditions were very tricky. It was a combination of wet, cold temperatures, and wind that made the start of this GP more difficult for us. Even though the conditions in FP2 were worse than they were in FP1, both riders felt better in the afternoon. It’s a sign that we made a step in the right direction even if it doesn’t show in the combined results. We need to work hard tonight and tomorrow to make our riders feel more comfortable in wet conditions as it looks like the rain is here to stay for one more day. Current weather forecasts predict a mostly dry race day, but a good starting position is crucial for us, so tomorrow’s sessions will be vitally important.

This morning, the conditions were better. Unfortunately, we were not able to improve on the second run of FP1, which was the best condition of the day. But then In FP2, on the first run, we improved. I was one of the few riders to improve, so we made quite a good step. I'm happy about that. It was okay until the second run of FP2. At that point the conditions got quite tricky with lots of standing water and aquaplaning. It was also windy, but not consistently, it was gusting. Moreover, the track is quite a tricky one, so it was quite a complicated day, let's say. Let's see what the conditions will be like tomorrow. Let's try to get directly into Q2.

In Mandalika the grip of the track was insane, and I felt much better there. Here the grip level was really low, and my position really bad, but my feeling on the bike has improved compared to the past. I think we just need to see where we can go faster and where we can improve. Let's say that this is not the best start to the weekend in Portugal, but let's hope we can make a big step tomorrow. There are a few points to improve on the bike, but also a few points to improve on my riding style. Let's hope it's dry for FP3, because I think we have a little bit of a higher chance to go into Q2 if it's dry.