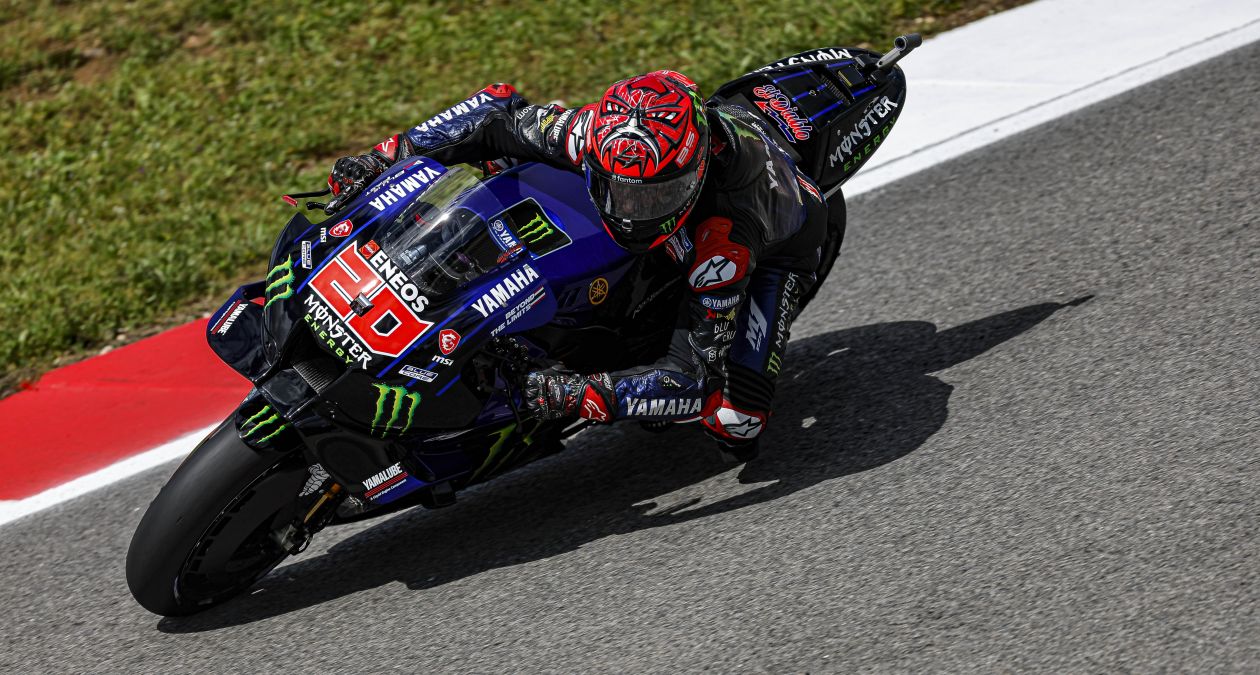 Monster Energy Yamaha MotoGP’s Fabio Quartararo and Franco Morbidelli had a fight on their hands in today’s qualifying sessions at the Autódromo Internacional do Algarve. Quartararo’s best lap was cancelled due to a yellow flag, but he still placed 5th. Morbidelli struggled to find the right tyre combination suitable for the drying circuit in Q1. He will start the race from P19.
Portimão (Portugal), 23rd April 2022
Monster Energy Yamaha MotoGP’s Fabio Quartararo was in the mix for pole today in the Grande Prémio de Portugal Q2 session. He came tantalizingly close to provisional pole multiple times, but ultimately ended the session in P5. Franco Morbidelli faced a difficult 15-minute shoot-out as a dry line was starting to form at the start of Q1, yet the track remained filled with wet patches. He will start tomorrow’s race from P19.

Quartararo was the last rider out on track in Q2, letting his rivals go out ahead of him. The sun was shining, and the track was drying. But the current World Champion got an early warning when in Turn 7 on his out lap he hit a wet patch but skilfully managed to stay seated. His benchmark lap put him in ninth.

Throughout the session, the Frenchman gradually upped his pace. He was part of a mix of riders flashing red and orange sectors and came very close to pole at this stage. He saved the best for last, but a late crash of Pol Espargaró meant yellow flags, cancelling his 1’42.370s. The Yamaha-rider’s next best lap, a 1’42.716s set on lap 7/8, earned him fifth place on the second row.

Unsure about the drying track conditions, Morbidelli started Q1 on wet tyres. Lucky to avoid early-on yellow flags, his benchmark lap moved him swiftly into third place. He improved his time but not his place on his second try and entered the pits holding fifth.

The Italian soon re-join the session. However, he headed straight back to the box as his gamble to go for slick tyres didn’t pay off. With two and a half minutes on the clock, he started his third run on wet tyres again. Morbido gave it his all to put in a bid for the top 2. He started well with a red sector and three personal best sectors to set a 1’50.702s, but it wasn’t enough. The number-21 rider ended the session in 9th place, 4.386s from the top. He will start tomorrow’s race from P19.

It was a mixed day both in terms of weather and results, which is a shame because both our riders showed good potential, especially in FP3 and FP4. We made a good improvement compared to yesterday, and we’ve been competitive in all track conditions, even mixed conditions which are usually not our preferred option. Fabio’s starting position is not bad at all, though it could have been even better if he had been able to get another lap in. Franky has to recover positions from P19 on the grid tomorrow. It will be a challenging comeback race for him. Having done most of the sessions in the wet, apart from Qualifying, tomorrow’s Warm Up will be an important session for the bikes’ set-up and the tyre choice.

I'm super happy today. I already said yesterday that the position was bad, but we noticed an improvement. This morning in the wet, we finished less than 0.1s behind first place, and in FP4 in mixed conditions we finished fifth. Half-half conditions with slicks, like in today's qualifying, are the worst for me. Like I think for anyone in Q2, they cancelled my last lap, but that's not the biggest pity. I missed the opportunity to do another lap by 2s. I took the chequered flag, and that was a real shame, but I'm super happy. If you had told me before Q2 that I would be on the second row, I would have signed for it, so I'm happy.

I'm a bit upset about today. Because due to small details we didn't put our full potential out on track at the right time, which is qualifying. Our potential was more than 19th. Anyway, we move forward. First of all, we will see if tomorrow's race is a dry session. And if so, we will try to keep going with our process and try to confirm the good feeling that I had in some moments of some sessions also on the dry.