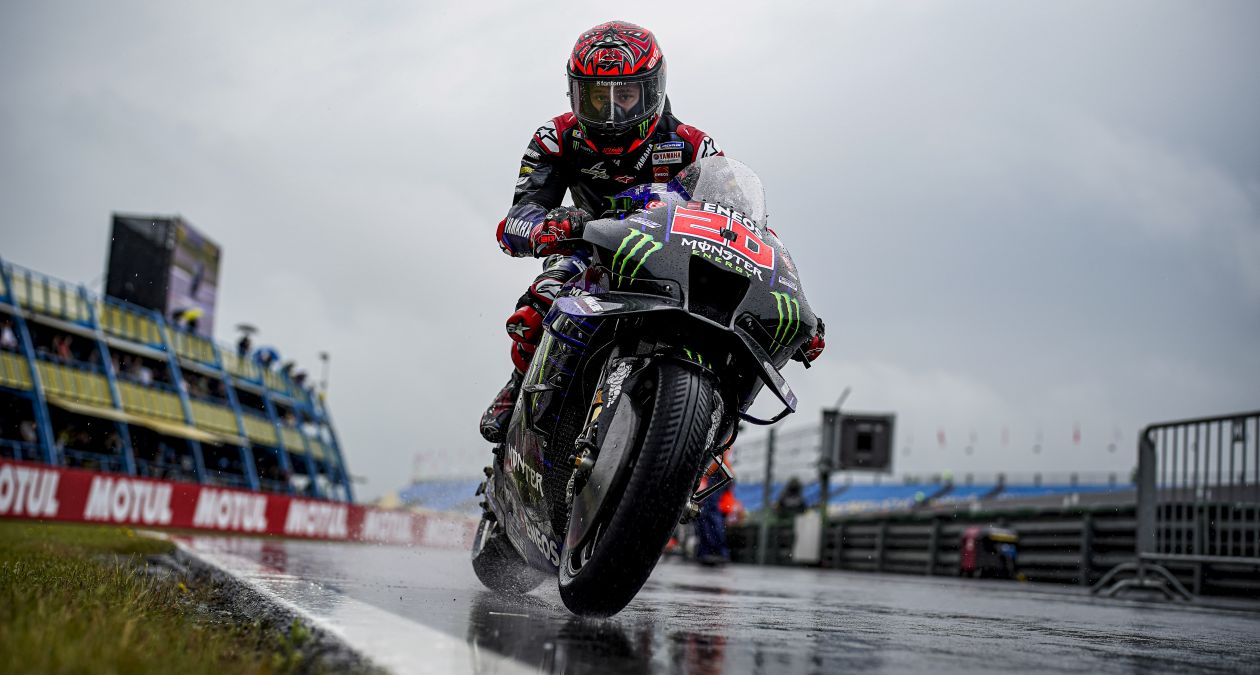 The TT Assen was off to a very wet start in FP1, but the track quickly dried in the afternoon, allowing Monster Energy Yamaha MotoGP’s Fabio Quartararo and Franco Morbidelli to push more in FP2. They ended the first day at the TT Circuit Assen in 3rd and 18th place respectively.
Assen (The Netherlands), 24th June 2022
Monster Energy Yamaha MotoGP’s Fabio Quartararo and Franco Morbidelli had to negotiate tricky riding conditions on the first day of the TT Assen race weekend. The pair decided to bide their time and take a calculated risk to only push to the max in the drying afternoon session. They ended the day in P3 and P18 respectively.

It was clear from the get-go in FP1 that rain was going to be a major theme throughout the day. With loads of water on track and plenty more falling from the grey skies, Quartararo knew he had to tread with care. He featured inside the top 4 for a large part of the session but dropped down the order as the pace picked up at the end. Despite improving his lap time to 1’44.248s on his 13th and final try, he ended the session in 17th position, 1.659s from the top.

The Frenchman was feeling more comfortable on the drying track in the afternoon. He worked diligently throughout, starting on wet tyres and switching to slicks for the second part of the session. Pushing in the final minutes, the reigning World Champion was briefly featuring at the top of the standings. He put in a few hot laps and ultimately took third place in the FP2 and combined FP timesheets with a 1’33.579s set on lap 20/20, leaving a gap of 0.305s to first.

Rain didn’t seem to bother the cool and calm Morbidelli. He put his Yamaha in first place multiple times in FP1 in the earlier stages as he navigated his way along the very wet TT Circuit Assen. As the pace picked up at the end of the session, the Italian also put his head down to put in a good lap, but traffic on track prohibited him from showing his full potential. A 1’43.724s, set on lap 12/13, put him in 15th place, 1.135s from first.

Morbido showed that the pace he displayed at the beginning of the morning session wasn’t a fluke. He again featured at the top of the standings at the start, but the rapidly drying track had the riders switching to slicks soon. On the soft tyres, the Italian was unable to match the pace at the end of the session. He put in 22 laps and wrapped up the day with a 1’34.828s set on lap 18, leaving him in 18th place in the FP2 and combined free practice results, 1.554s from P1.

As Morbidelli accidentally hindered Enea Bastianini on track after a small off-track excursion, he has been given a Long Lap Penalty by Race Direction for Sunday's race.

The conditions today were very tricky, especially in the wet FP1 session. Because we knew that the FP2 session and FP3 session were likely to be dry, we didn’t want our riders to take too big of a risk in FP1. The plan worked in Fabio’s favour: the track was dry for FP2 and that was the right moment to push. Franky showed some great pace early on in the FP1 and FP2 sessions, but unfortunately he still suffers from the same problem as before: the soft tyre gives him too much grip and doesn’t allow him to make as big a time improvement as it does other riders. We will continue to try to fix this problem. Should it be dry tomorrow for FP3 and FP4, we will use those sessions to make up for the time we lost in the wet FP1. We still need to fine-tune the set-up and decide on the tyre specification for the race.

The wet conditions this morning were tricky, and I didn't want to take any big risks. Of course, our position was quite far from first because of this. We know our potential is much higher in the wet than that, but it's not as high as in the dry. This afternoon I had a great feeling even in the tricky drying conditions. I usually struggle in that area. I'm feeling quite happy and confident.

I feel good in conditions when the grip is not so high. I’m able to show my potential, but then we need to get better in other conditions. I need to use the bike better to extract the full potential. It's difficult to do for me right now when there is grip, but the potential is there, and I will keep trying.

I'm sorry for a mistake I made in FP2. I went outside the track and accidentally hindered Enea, and I got a long-lap penalty for it.