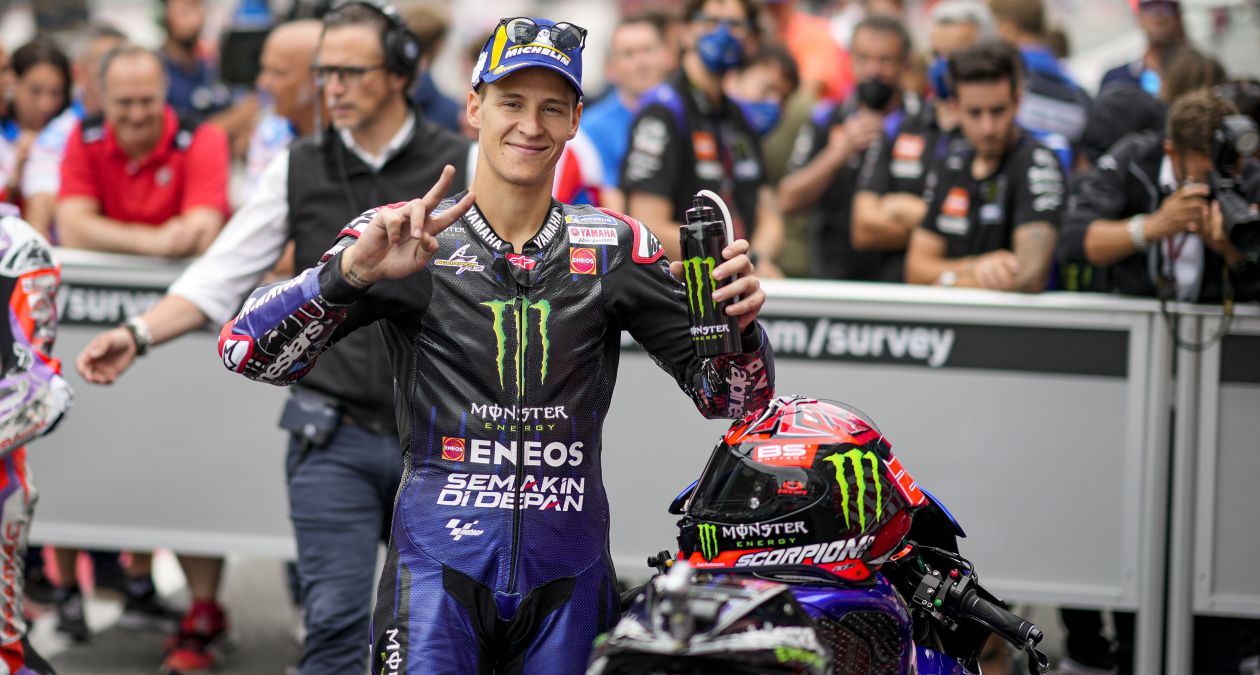 Quartararo to Commence Assen Action from P2 on the Grid

The TT Assen qualifying sessions had grey clouds looming over them, but in the end both were mostly dry. Fabio Quartararo set a lap that was faster than last year’s All Time Lap Record to secure P2 on the grid. Franco Morbidelli had a strong first run in Q1 but wasn’t able to make the same strides on his second try. He will start the race from P20.
Assen (The Netherlands), 25th June 2022
The Monster Energy Yamaha MotoGP Team was cheering on Fabio Quartararo in today’s Q2 session as he dropped a time faster than the previous All Time Lap Record. He will start the race from P2 on the grid. Franco Morbidelli was pushing hard on his first run but wasn't able to get the full potential out of the second tyre. He will start tomorrow’s TT Assen race from P20.

Quartararo had topped the FP4 session half an hour earlier, and with dark clouds looming he was keen to get in some hot laps at the start of the Q2 session. His first attempt put him in second place, with a 0.010s difference to first. Pushing hard, he ran wide in Turn 1 on his next try. He quickly returned to the pits for a fresh set of tyres.

With five minutes left on the clock, El Diablo started his second run. He found himself in third place at the time and knew he had to put his head down. He posted a 1’31.620s on lap 7/8 that moved him up to second place while spots of rain started to fall. He had time for one more lap, but a big wobble in Turn 5 ended his chances of another time improvement. He ended the session in P2, 0.116s from first.

Morbidelli had a fast crash in FP3 this morning but was luckily unhurt. No worse for the wear and warmed up again after FP4, he briefly hit the top spot with his benchmark lap in Q1 before he settled into P5. He sped up, setting a 1’33.190s for third place, but other riders were faster as well. He found himself in seventh place as he returned to the box with eight and a half minutes on the clock.

Once back out, he was still holding seventh position and was keen to find a time improvement. Despite bettering his time to a 1’33.096s on lap 7/8, he was unable to climb higher then tenth place, 0.611s from first. He will start the race from P20 on the grid and will have to complete a long-lap penalty he was given on the Friday for obstructing Enea Bastianini in FP2.

The times are very fast this weekend! For the top 4 riders to go under the previous All Time Lap Record underlines how high the level is. Fabio did really well to secure second, and without that moment on his last lap, he might have been able to even push for pole. But anyway, second is a good place to start the race from. Lately Fabio has been a demon at the start, so we hope he can do another one tomorrow and then just enjoy the race, because we think it will be an exciting one! Franco had a big crash earlier today in FP3, but he was okay to continue. After gaining back the confidence in FP4, he showed good potential on his first run and was flashing red sectors. However, with the second soft tyre he struggled again to set a fast lap. He will start tomorrow from P20, which is difficult, and he also has to do a long-lap penalty. But we don’t want to ‘waste’ this race, so he will be pushing to get in as many overtakes as possible, and we will use it to collect some extra data that will help us after the summer break.

My run-off in Turn 1 was because I wasn’t focused basically, and the moment that I had at the end was because I was pushing over the limit. But it’s qualifying: you need to push over that limit. It was great and one of the more scary qualifying sessions. When you arrive in Turn 6 and you know you lost a bit on the straight so you need to gain in that corner, that’s a turn that you need to hold your breath for more than ever. It was fun and we enjoyed it quite a lot. I’m really happy! In FP4, our pace was great, and in qualifying the one-lap speed was good too. We know more or less which tyre to use for tomorrow’s race, so I feel happy. And I think this will be a fun race, and hopefully we get a great result before we go on holiday.

Today was good in some moments, but then on the soft tyre I was again unable to extract the potential. I'll keep working - on myself especially. I also need to improve on the hard tyres. Apart from Fabio and Pecco, who were really fast, we are all in the pack pace-wise. We were able to be decently fast with the hard tyre. We will try to make another step in both situations, hard and soft tyres, but especially with the soft. I’m leaning towards the hard tyre for the race. There are some overtaking spots here. For our bike, Assen is quite good. Last time I raced here, I made many overtakes towards the end of the race. I will have to do a long-lap penalty, but it's a track where it's possible to overtake. I can go for it!