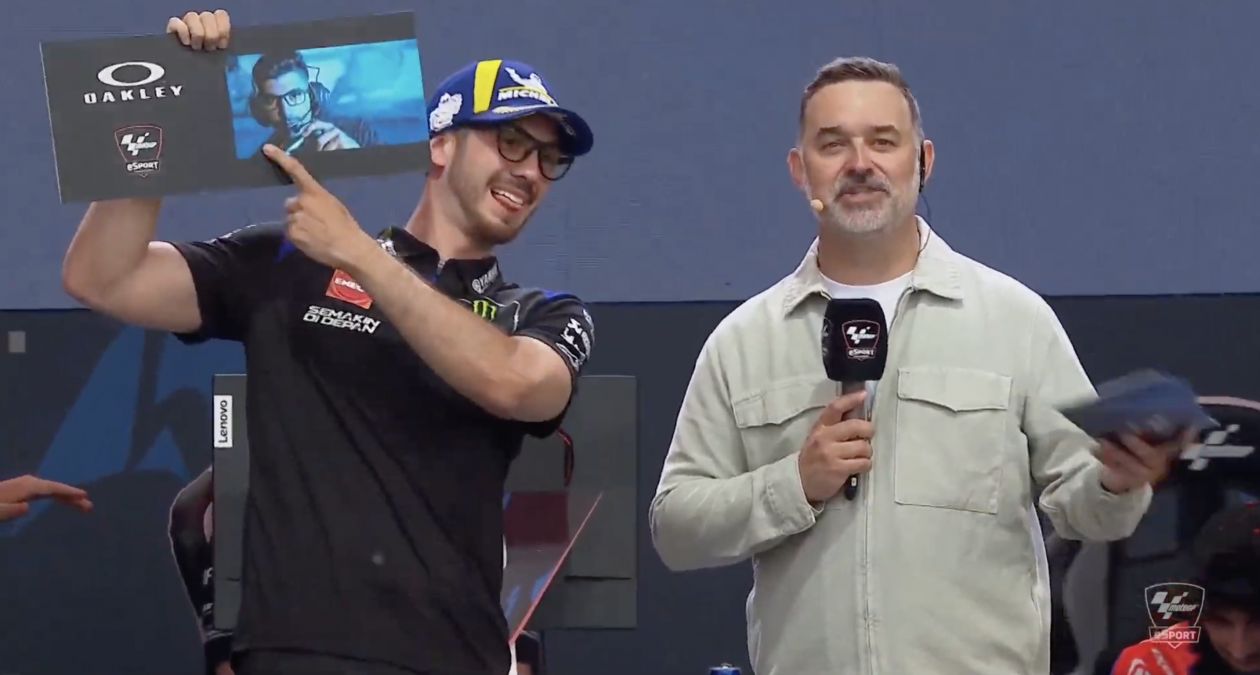 Lorenzo Daretti (aka Trast73 or Trastevere73) showed why he is a three-time and reigning MotoGP eSport World Champion in today’s Round 1 of the 2022 MotoGP eSport Global Series. He demonstrated that he is still the man to beat, regardless of the weather conditions or misfortunes along the way, securing a hard-fought fourth and first place respectively in Race 1 (Sachsenring, wet) and Race 2 (Mugello, dry).
Scarperia (Italy), 27th May 2022
Today, Monster Energy Yamaha MotoGP’s Lorenzo Daretti (aka 73Trast or Trastevere73) made a solid start to his 2022 MotoGP eSport Global Series campaign. The three-time MotoGP eSport Champion (in 2017, 2018, and 2021) faced challenges in both races head on, showing you should never rule him out. He secured a fourth and first place respectively.

The excitement was building at the Autodromo Internazionale del Mugello as the qualified eSport players competed in Round 1 live at the track. Trastevere73 is a pro in dealing with the added pressure of having a large audience watching his every move, thanks to Formula Medicine and Focus Calm. Their support and training gave Trastevere73 the determination and concentration needed to make good starts and minimise mistakes.

Sachsenring is narrow and overtaking there is difficult. The rainy conditions made it all the more tricky. Trast73 had a good start and moved up to third in the opening corners. It didn’t take long before he gained another position and was chasing the race leader. However, in his enthusiasm he got caught out by the slippery conditions and went wide with high speed. Yet, the Italian miraculously negotiated his way out of the gravel trap. He rejoined the track in eighth place, but he was not discouraged. By the end of lap 2, he was already back up to sixth place. Putting in one fast lap after another, he climbed back up to fourth position across the finish line.

Race 2 was a masterclass by Daretti. He made his experience count and managed to stay calm despite a third restart due to technical problems. Once underway for the fourth time, he produced a phenomenal opening and took the lead in Turn 2. The Yamaha rider stayed perfectly concentrated for the entire length of the race, keeping PieroRicciuti55 behind him until the final two laps. Daretti then engaged in an epic battle with the charging rival and withstood the pressure. Trastevere73 used his wily skills to stay ahead and was proud to secure his first race win of the 2022 season. It’s his 12th race win in his MotoGP eSport career, extending his lead as the most successful eSport rider.

Trastevere73’s efforts in Race 1 and especially Race 2 earned him 38 solid points and a first place in the rankings for the 2022 MotoGP eSport Championship.

I’m very, very happy after these two races. At the start of the weekend, I was suffering a lot, but today at the end of the Sachsenring I was very focused on not crashing and taking as many points as possible. And I achieved that. I wasn’t the fastest, but that fourth position wasn’t bad for this race and the championship standings.

As for Mugello, I knew I was really fast, but I also knew it would be difficult to have the right kind of focus at the restarts. But then, when it really counted, I started the race with a clear mind, and I released the brakes in the right moment to take first position. I had Piero behind me for many laps. He was very fast and tried to overtake me on lap 7. He was faster than me in the last sector, so it was very difficult to hold him off on the straight. But I knew I was faster in the first sector. When he passed me, I tried to remain focused and overtake him again. I did it! It was a very tough race, very fast.

It was a crazy first two races, but now I’m very happy because we are leading the championship. Now let’s see what happens in the next races.