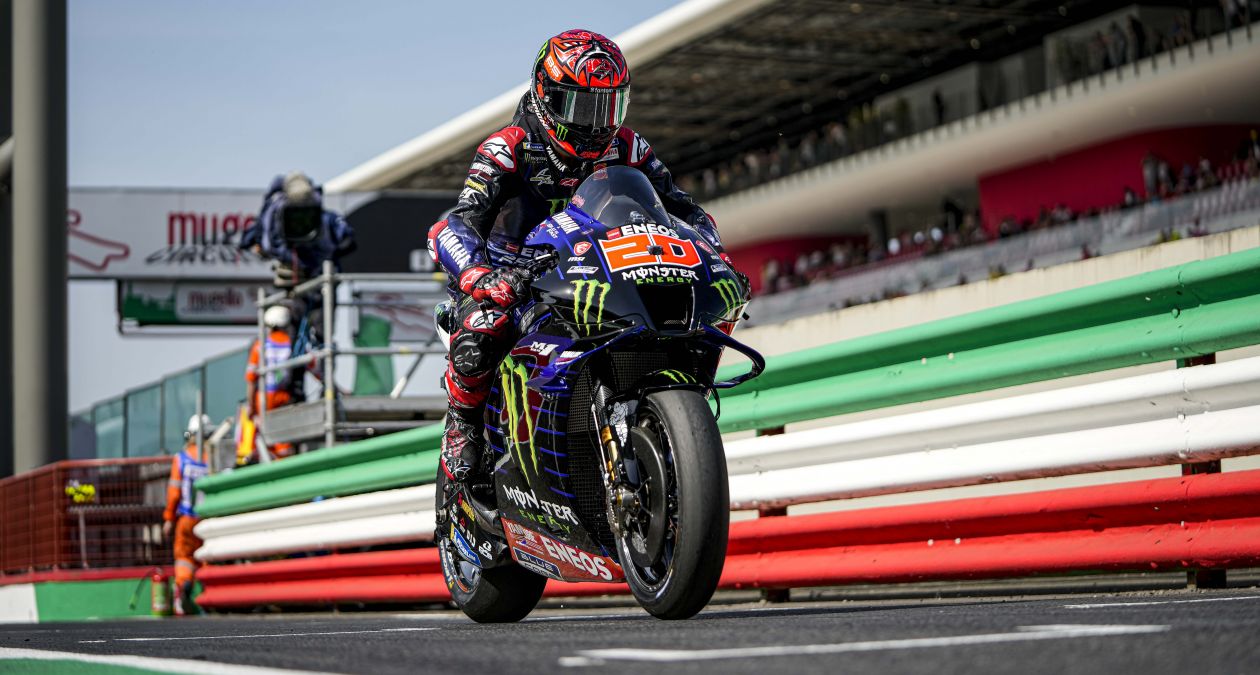 Due to a crash from Marc Marquez at the start of Q2, the session was briefly halted to clean up the track. Quartararo was quick to restart the session at 14:46 local track time, keen to get a lap in should conditions change for the worse.

Marquez’ earlier crash had shown the importance of getting heat into the tyres first. After a cautious benchmark lap, which put the Frenchman in tenth place, he put his head down and gradually upped his pace. Amid fierce competition for the first rows, he saved the best for last, clocking a 1’46.506s on lap 9 to take sixth on the grid, 0.350s from pole.

With rain starting to fall in the middle of FP4, the tension was rising at the start of Q1. Morbidelli had used the afternoon practice session to get a feel for the conditions and was the first rider to start the 15-minute shoot-out. His benchmark lap put him in eighth place.

Unable to improve on his next try, the Italian made a quick pit stop. He picked up the pace on his next run. He clocked a 1’55.369s on lap 6/7 to hold fourth place in the final five minutes. However, the track then rapidly dried. Riding on wet tyres, the home hero was forced to head back to the box. When the times dropped in the final stages, he was pushed back to 13th. He will start the race from 23rd place.

It’s not been an easy weekend so far, and the rain in FP4 made it even more complicated because we couldn’t test what we had prepared for Fabio to improve his feeling with the front. But we did test it during Q2, and the feeling was good, even though the conditions overall were not easy at all. Starting from the second row here in Mugello is a good achievement. Franky was thrown into the deep end in Q1. It was hard to tell what the conditions were like at the time. He went out with soft tyres, and when he made a pit stop during the session, it was still raining a bit. He stayed on wet tyres, but unfortunately the strategy didn’t pay off, because the track dried really quickly after that. If the Warm Up is dry, we will for sure do some further fine-tuning in the areas where we still have room for improvement.

This morning, I didn't have a good feeling on the bike, and I couldn't make a good lap time. This afternoon, we made a big change on the bike. Though I didn't do a complete lap in FP4, I already felt better. The conditions this afternoon were really dangerous. This is a very fast and very long track, and riding here with slicks after rain, you don't know what to expect in all the sectors. That wasn't a great feeling. But in the end, P6 on the grid is a good result for us.

Today was a positive day for us, apart from the qualifying. In FP4 I felt better than yesterday, and I was able to ride the bike better. In qualifying I made the mistake to keep riding with the wet tyres. I didn't know if it was going to rain more or less, so I stuck with the rain tyres to be on the safe side. But in the end, in the last two laps the conditions cleared up. I ended up further down the grid unfortunately. Our speed here is better than starting from 23rd place. On the other hand, I'm making steps forward this weekend, and I'm closer than ever to Fabio, though we're still too far from the top.