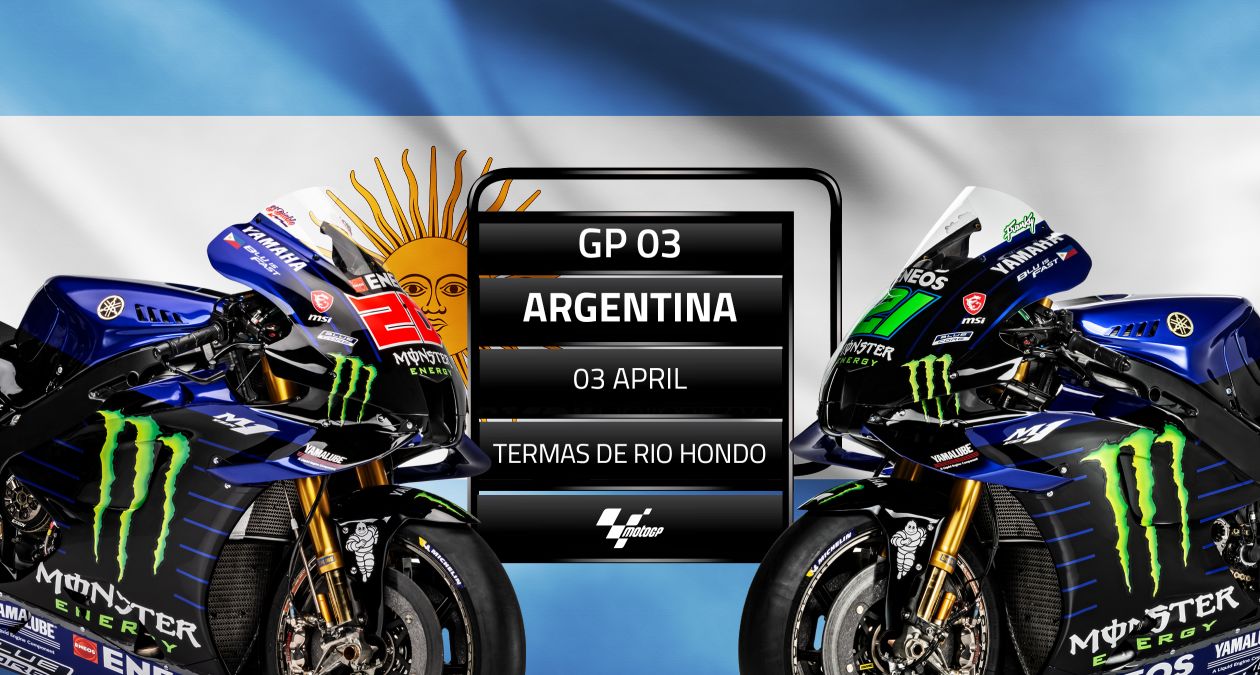 Though he didn't end the first race of the season in as high a position as he would have liked, Quartararo took the positives from the first GP weekend and turned the narrative around in Indonesia, securing second place. Thanks to this result, he moved up to third in the championship standings, and he is ready to challenge amongst the front-runners again this weekend.

His first race on a MotoGP bike in Argentina was three years ago, when he took eighth place. With a lot more experience under his belt, the current World Champion is confident that he can put up a challenge for a top result this weekend.

Morbidelli took a solid seventh place at the soaking wet Indonesian GP despite starting from fourteenth on the grid. The stellar comeback puts the Italian in high spirits as he prepares for battle again this weekend with the aim to improve his tenth place in the overall standings.

Morbido is hugely popular in Latin America, thanks to his Brazilian roots. He can expect the support of the local fans, who will be cheering him on this weekend. The number-21 rider aims to do them proud like he did in 2017 when he secured the victory in the Moto2 class.

The 4.8km long Termas de Río Hondo Circuit was added to the MotoGP calendar in 2014. The track was remodelled two years earlier to make it Latin America's most modern circuit. With an exciting lay-out that includes a mixture of fast corners (five left, nine right) and a 1076m longest straight, the MotoGP fans can be assured that they will see plenty of racing and overtaking action again, as shown in our latest MotoGP eSport video. A devastating fire in February 2021 destroyed a large part of the paddock, but it has been rebuilt since then. The teams are looking forward to return to this circuit after the three-year interval due to the ongoing Covid pandemic.

We are finally racing at the Termas de Río Hondo circuit again. We are excited to be back. The local fans are incredibly passionate about MotoGP, and after our absence I’m sure they are hungry for some MotoGP entertainment. It’s our objective to give them precisely that. We have already seen in the previous two races that all the riders are very close in the timesheets and that things can change per round. But we know this track suits our bike, so we plan to use this to our advantage, and we expect a solid weekend.

It’s nice to be back at the Termas track. None of us have ridden here since 2019, so that means that we are all pretty much starting from the same point. This is not my personal best track, but I think we can do a good job here. In Indonesia I was feeling a lot better with the bike. We tried something new, and that paid off. I’m very curious to see if that will also be the case here.

Considering my starting position, we did a good job in the last race in very difficult conditions. My crew and I are gaining more and more experience together, and that results in better races even when the circumstances aren’t in our favour. It’s nice that we get to visit Termas de Río Hondo again after a long time. My feeling with the bike was good at Mandalika, and I hope to have the same feeling again this weekend.
eSport Video | Argentina GP