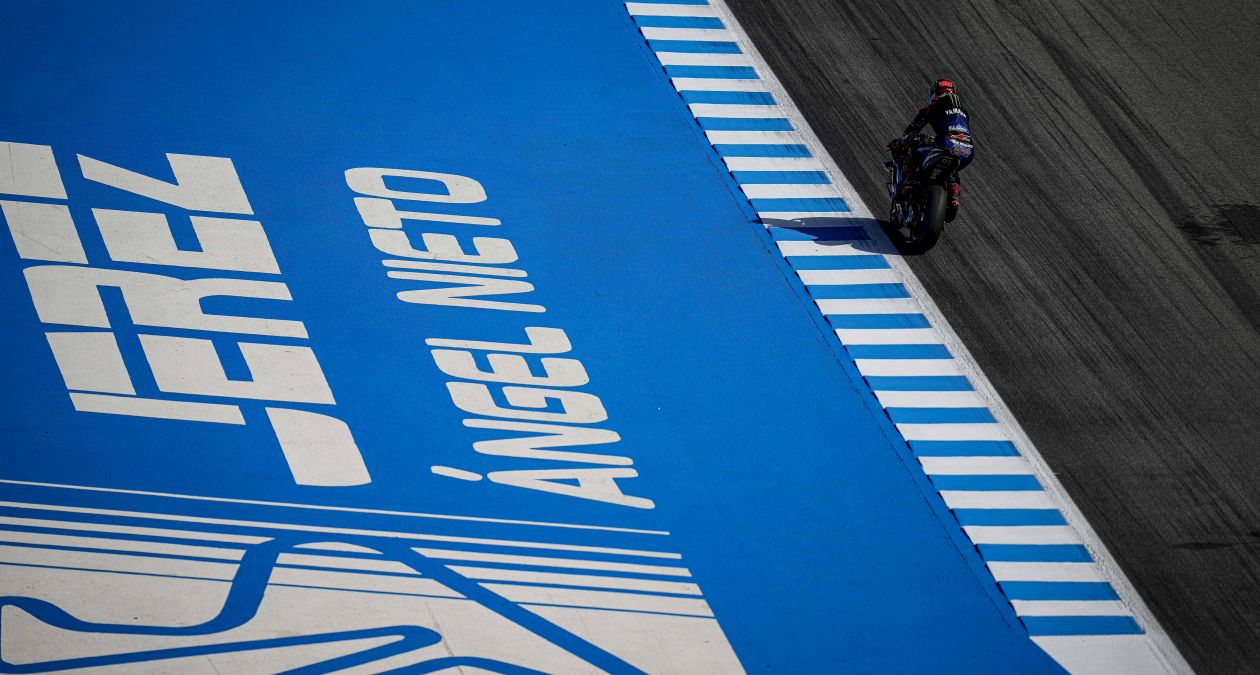 Monster Energy Yamaha MotoGP’s Fabio Quartararo had a day of highs and lows. Despite a painful crash in Turn 13 during FP1, he showed a superb pace all day and ended Friday firmly at the top of the timesheets, with a 0.201s advantage over second place. Franco Morbidelli made progress on the first day of riding at the Circuito de Jerez - Ángel Nieto. But with the first 16 riders covered by less than 1s, his best lap put him in 14th place.
Jerez de la Frontera (Spain), 29th April 2022
Monster Energy Yamaha MotoGP’s Fabio Quartararo showed true determination today. Even a painful crash in FP1 didn’t slow him down as he rode to a convincing P1 result on the Friday. Franco Morbidelli focused on improving his bike’s race set-up on Day 1 at the Circuito de Jerez - Ángel Nieto. He ended the day in P14.

Quartararo had a strong start to FP1, setting a 1’38.780s on lap 7 that put him at the top of the provisional standings. But things took a turn for the worse on the very next lap. The Frenchman crashed in Turn 13. Relatively unhurt, he headed out on his second bike shortly after. Amazingly, he was soon pushing to the limit again. Despite having a few more moments out on track, he ended the session in fifth place, with a 1’38.439s best lap, set on lap 14/19, 0.245s from the top.

El Diablo proved further that he was okay by starting the FP2 session taking the provisional top spot again, setting a 1’37.970s lap. But the real challenge came in the second half of the session as the times tumbled. The current World Champion responded, clocking a 1’37.071s on lap 17/18. It earned him top billing for Day 1 in Jerez, with a 0.201s margin over second place.

Riding in the perfect Spanish sunshine at Jerez, a track he likes, Morbidelli had a good feeling about this weekend. He got straight to work, trying to find a solid base setting. He put it to the test with 15 minutes to go and moved up to seventh with a 1’38.979s set on lap 14/20. The time ultimately saw him take 15th place, 0.785s from first.

Morbido made a step in the afternoon session, shaving off 0.4s of his morning time in the first half of FP2. He continued working on his bike’s setting until it was time to try it out in the final minutes of the session. He set a 1’37.952s on lap 17/18 that was 0.881s off today’s fastest time. With less than 1s covering the first 16 riders, the lap put him in 14th place.

Let me start by saying that we are glad that Fabio is okay after that nasty crash in Turn 13. Still, Fabio’s pace was really good right from the start, and he confirmed his good feeling this afternoon even when the conditions of the track weren’t perfect yet. We know that the grip levels will go up and that should suit our bike better, so we are confident for tomorrow. Franky made progress compared to last weekend, but there is still room for improvement. I’m convinced that he will be able to make another step for tomorrow’s FP3. We want to have both riders in the top 10, so we'll work hard this afternoon and evening to prepare some setting solutions to allow them to get there.

I'm happy, especially because if you check the results of the last few years in Jerez, I was always struggling on the Friday. We know the grip increases here day by day, which is important after yesterday's rain. We have a margin with our pace because we know that with more grip, we'll have better bike performance. This will be a strong point for us, and I already managed to put in a great lap this afternoon, so I'm pretty happy. We know where we can improve. I'm not nervous about it, because I know I can manage it. With the grip increasing, everything will be even better.

So today was a positive day because I felt improvement compared to Portimão, and this is good. Finally, the time attack wasn't a real time attack for me because I used the medium front tyre and I made a bit of a longer run, whilst the other riders exploited the first laps of their tyres, many of them with the hard front tyre. But I'm closer to the top 10, closer to the top guys. Pace-wise I'm missing three or four tenths. We will try to improve tomorrow and see if we can catch up.