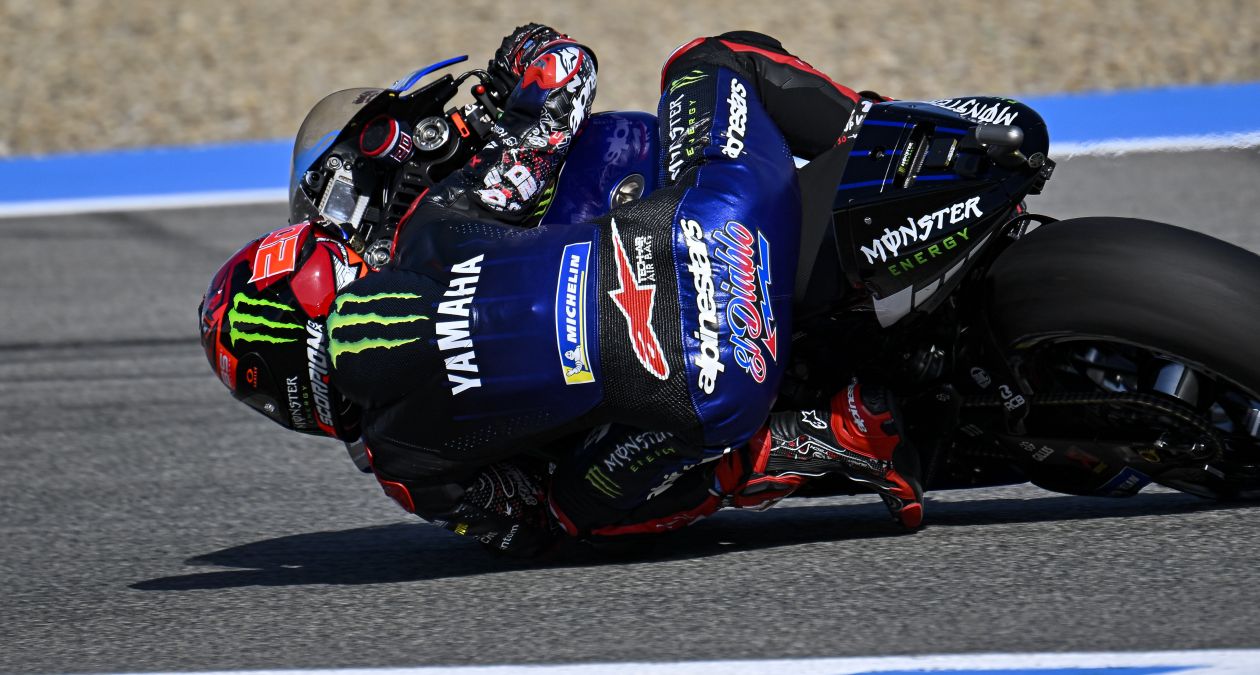 Monster Energy Yamaha MotoGP’s Fabio Quartararo showed fabulous pace at the Circuito de Jerez - Ángel Nieto all weekend and will start the Gran Premio de España from second place. Franco Morbidelli had a challenge on his hands in Q1. He was unable to secure a spot in the top 2 in that session and will start tomorrow’s race from 16th on the grid.
Jerez de la Frontera (Spain), 30th April 2022
Monster Energy Yamaha MotoGP’s Fabio Quartararo gave it his all to defend his perfect premier class pole score at the Circuito de Jerez - Ángel Nieto. Though he ultimately secured P2 on the grid for the Gran Premio de España, he is fancying his chances tomorrow considering his great race pace. Franco Morbidelli is narrowing the gap to the top guys every session. But with the times being very close, he was unable to promote to Q2. He will start tomorrow’s race from P16.

Quartararo went into Q2 as the fan favourite after having secured pole position four consecutive times in the past few years. Luck wasn’t on his side with his first hot lap being cancelled, but the Frenchman’s pace is so hot at the Jerez track that he could easily reproduce it. He set a 1’36.790s that put him in provisional pole before heading back to the garage for a fresh set of tyres.

With five and a half minutes left, El Diablo went back out. Followed by some of his rivals, the Yamaha man had to choose between going all out and giving them a tow or holding back and disrupting their plans. He picked the former option and set a 1’36.623s on lap 6/8. However, a charge from Francesco Bagnaia pushed Quartararo to second place. Due to yellow flags, the number-20 rider wasn’t able to respond until his final lap after the chequered flag was already out, but he wasn’t able to further improve. He ended the session in second place, with a 0.453s margin to the top.

Morbidelli took an extra lap around the Jerez track in Q1 before he put his head down. A 1’38.017s moved him up to eighth place as he entered into the pits to prepare for his next challenge.

With a 0.5s gap to the top 2, the Italian knew he needed to pull something special out of the bag when he started his second run with six minutes to go. He made an improvement in Sector 3 and 4, clocking a 1’37.668s on lap 6. It moved him up to fifth place, with two further tries remaining. Unable to capitalize on them, he ended the session in sixth position, 0.665s from first. He will start tomorrow’s race from P16.

It’s mixed results again for our team, though our riders are actually both feeling quite comfortable with their bikes. Fabio’s pace is strong, which he showed in every session so far, but especially the longer runs of FP4 are telling. He is feeling confident, so we are really looking forward to a probably tough but exciting race for him tomorrow. Franky did good work so far this weekend. He is inching closer and closer to the front in the timesheets, but unfortunately it didn’t result in a good grid position yet. Starting from further down the grid will be difficult, but since he is feeling good with the bike, we think he can make up a couple of positions. We will do a last bit of fine-tuning this evening, which we will test tomorrow morning in Warm Up as we prepare for what we think will be a hard-fought Spanish GP.

I think this second place will be super important for tomorrow. First row is a great place to start. For us, the pace in FP4 was great, so I think we can do a great race. The most important thing is the result tomorrow, and I feel really confident. We know that during the race there will not be this kind of lap times or this kind of gap. We are working in a good way. Tomorrow will be a tough race because many riders have a good pace, but I feel that I'm one of those who can fight for the victory. It's great when you arrive at Turn 9 and 10, it's like a mountain of people enjoying MotoGP. It’s great that, after a long time, they can enjoy the show again here.

Today we were not fast in the qualifying, but the pace in FP4 was decent. The feeling was not great, but I was more affected in qualifying. We are getting better and better, compared to Portimão for example, and are getting closer towards a feeling that I like. Tomorrow we will try to make another step, and let's see where we can end up in the race.