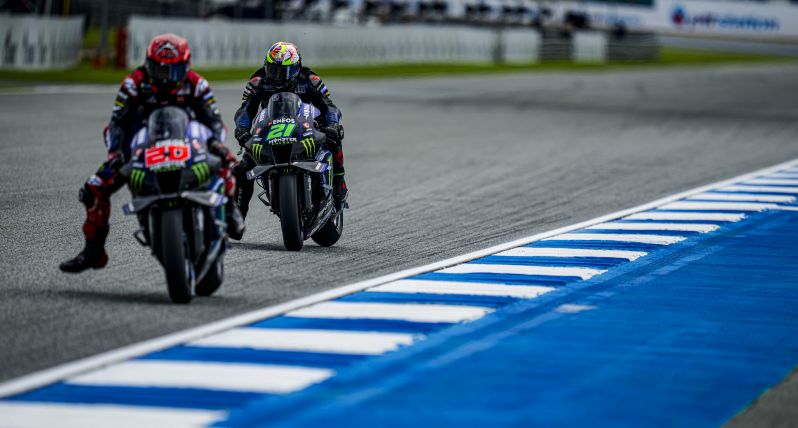 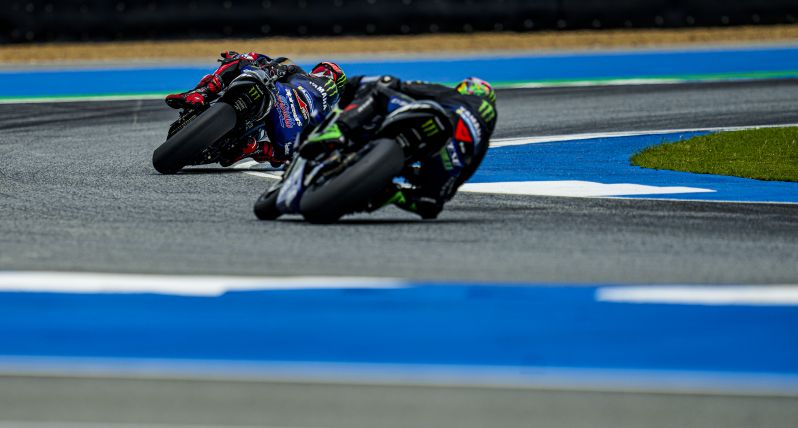 Quartararo entered the dry FP1 determined to work hard and cement his key protagonist status in the Thai GP weekend right from the get-go. He found a good feeling on his YZR-M1 and geared up for the time attack in the final minutes. The Frenchman then set a 1’30.555s on lap 19/21, that put him in second place, 0.032s from first.

With blue skies above the Buriram circuit in FP2, the Frenchman knew the battle for a place in the provisional top 10 was far from over. He used the first two thirds of the session to gradually up his pace before switching to the soft rear tyre. However, he was prevented from putting the hammer down by two yellow flags. The championship leader didn’t even need to push though. His morning time kept him in fifth place in the combined timesheets.

Morbidelli was a man on a mission early on in the surprisingly dry morning session. He climbed up to second place within the first ten minutes, showing that his pace was on the mark. But the Italian couldn’t relax just yet. A high chance of rain in the afternoon meant a time attack was coming at the end of FP1, as all riders were keen to secure a place inside the top 10. Morbido responded with a 1’30.765s on lap 20/20 that earned him eighth place, 0.242s from first.

The number-21 rider kept pushing hard in FP2. With an unexpected extra 45 minutes of dry track time, he knew the time attack to come was going to be full on. He used most of the session to tweak his bike’s settings and get ready for the challenge. However, he didn't have a good feeling on the fresh tyres for his time attack. Though Morbidelli didn’t improve on his morning time, he held on to a top-10 result in the combined FP rankings, 0.484s from first.

We had a good start to the Thai GP. We were happy it was dry in FP1 and FP2 so we could get some work done in case of a dry race. We usually do well in Buriram, but not having ridden here since 2019, and with the competition being so close this year, we were unsure what to expect. There was a lot of traffic, riders looking for a tow, and yellow flags, so that kept our riders from improving in FP2. But to have both our riders still inside the top 10 in the combined times is very positive. It puts us in a good position for tomorrow, because it looks like FP3 might be wet. If that’s the case, we will use that session to the fullest to get our riders to also feel this comfortable in rainy conditions. We could definitely use that wet track time to prepare for a potentially wet qualifying and race – because here you never know!

Today was good, especially this morning’s session. This afternoon it was great too, but unfortunately during the last time attack I had two yellow flags, and I made a mistake on the last lap. But apart from that, I think that our pace is okay, especially on a new medium tyre. I think we have a good chance to battle for the podium, but so do many other riders. We'll have to see what the weather will be like tomorrow, and then we go from there.

It was a positive day. We managed to get into the top 10, which is always the aim, and today we achieved it. We're a bit close to the danger zone because we're tenth, so it's important to step it up tomorrow to secure a top-10 result again. Apart from that, I had a decent day. Also pace-wise I felt pretty decent this afternoon. Unfortunately, during FP2's time attack, the performance didn't come. I didn't have a good feeling with the tyres. We are checking it now, but anyway I had a good Friday.